It is I, Chance the most handsome blogging Border Collie in Minnesota.  We didn’t see any more eagles in the field. Far Side was in a real funk..so after errands in town Far Guy drove her out to the point.  The point used to be kinda a teenage place to do a little necking or if you are older and have a camera it is a good place to take some photographs. 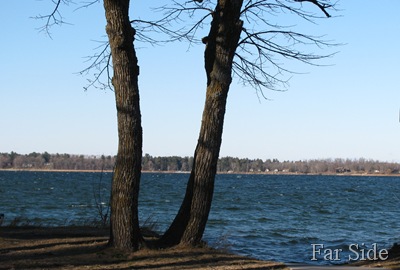 It was cold, there were white caps on the lake. 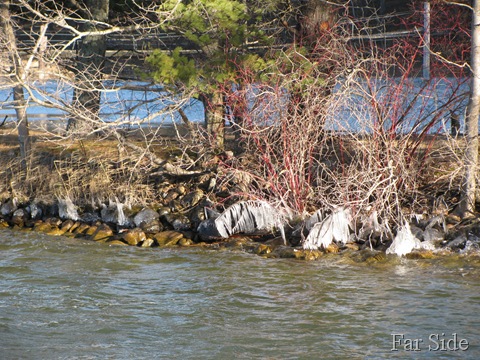 The wind was blowing the water up on the foliage on the bank by the boat channel. Yes, that white stuff is ice. 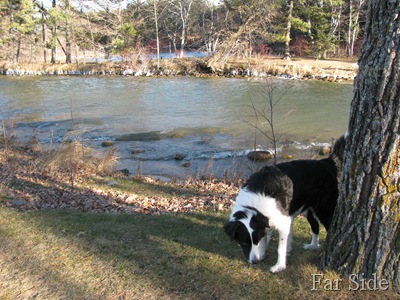 I had to smell around this tree a really long time.

Someone lost their shoes.

Far Side had to go back to the car to warm up several times..the wind chill was way below zero. Finally she just gave up and told Far Guy where to go..that is drive..so that she could take a few more photos out the window so she wouldn’t turn into a human popsicle and freeze to death.  She turned the heat on full blast but then rolled down her window. Silly girl! 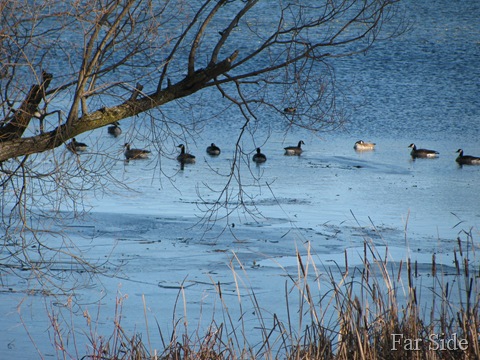 She would have got better photographs of the Canadian Honkers but I growled at them.  One of them was standing on the hard water..as in FROZEN..on one leg.  She missed that shot.

She pretty much missed this one too..someone rolled down the window for me while Far Side was ducking behind the trees trying to be sneaking..apparently geese can smell a dog from a mile away.

Thanks for coming along today..I had a blast..how about you?:)

I always enjoy a little visit with you, Chance. And it's really cold and blowing here, too. No driving for me today! Tell Far Side I love her picture of the line of geese!

I didn't know it was so cold in Minn. with ice around the lakes. I do thank you and Far Side getting out for photo's
Tell Far Side thanks for comments on other blog.

It sounds like you had a blast of COLD air!!!! However, the colors of the sky and water are such a brilliant blue. It was worth the Fars freezing for you and us (bloggers). Our temps are at 55 today and may get as high as 65. It is comfortable to be working outside in long sleeves and short sleeves are almost acceptable if you are really active. About the geese - - - I thought they migrated to warmer climates in the winter - - -as always, it's great to hear from you Chance. Dogs are better about blogging than cats. Ours won't even try it once.

Chance you are such a good tour guide!
I would love to visit Minnesota one day, it looks sooo beautiful!
My Sheltie, Dakota was horribly frightened by a goose once, he doesn't like to take walks ever since that happened.
I hope a goose doesn't frighten YOU!

Hi Chance, Sorry about the day being so cold. The lake sure is pretty and I loved Far Side's pictures. Hope you all are inside and cozy this evening.

Yes, I did have a blast and at least I was able to stay warm doing it! Every time we go to town we see the same pair of shoes hanging from the power lines, they have been there for a very long time.

Really pretty even though it was freezing out there...that is pretty much how we are right now..just a dusting of snow to go with it!

Chance, you and Notshy would be great partners scaring the birds off before the photographers get their shots. You and a certain black cat.

I love the ice formations but that means it's too cold for me!

P.S. I forgot to mention that when I am the only person in the car, I like the heater running and the passenger window and back window behind the driver both cracked open a bit.

What fun, even though you guys were messing up things for poor cold Far Side. Tell her I went to the stables with my daughter on Friday and lost all feeling in my feet after nearly two hours. I sympathize with her.

These are lovely shots anyway!

I hope you were jsut being discreet Chance, and aren't telling us about all the necking that Far Side and Far Guy were doing.

Burrrr! It's a good thing you have a fur coat Chance - and a beautiful one at that!

It looks like a fun day. I can tell when winter hits as the dogs really don't want to stay out too long. Barney does like to play in the snow but there is no snow.

Hey, Chance! I really like your lake. I would be cool to visit with you sometime, but on another note maybe you could come to Colorado and visit with Boomer and I. I'm getting a little old to do lots and lots of stuff, but Boomer could show you the corn fields and a few things here.

Anyway, thanks for the visit to lake, loved it. We don't have those things here. Anyway that I know of.

Chance, I could use you at the Farm. Those stinkin' geese are pullin' tufts of tuff out. And Patty is a bit too slow for them and those silly Ratters are only interested in the furry little fellows that tunnel in the garden. But they are pretty, I kinda go slow when I chase them down to the other pond.