Minnesota’s deer hunting season began yesterday. Even if you didn’t know about it you would figure it out by the sounds of rifles being discharged. One time in the afternoon someone shot 18 times..Far Guy counted.  It sounded like a war zone out there.

I spent the afternoon out in Far Guys “Studio” carving some special Christmas Ornaments.  He has taken to calling his old greenhouse a “Studio” ..perhaps it makes it easier for him to justify how messy it is. While I carved..I listened..there are still some Canadian Geese out and about..there is a Pileated Woodpecker someplace in the woods..and gunshots in every direction except the east.

The wily whitetails are out and about everywhere.

They are named Whitetail deer for a reason…I took this out of the windshield one day when Chance and I were off on one of our adventures.

On the way to town the other day this deer almost caused a traffic jam.

I understand that “she who sees robins first” could also be called “she who shot the first deer of the season.”

Neither Far Guy or I hunt with rifles anymore.  Since moving back here we can enjoy the out of doors everyday..we don’t need hunting for an excuse to get into the woods.  I love hunting them with my camera. 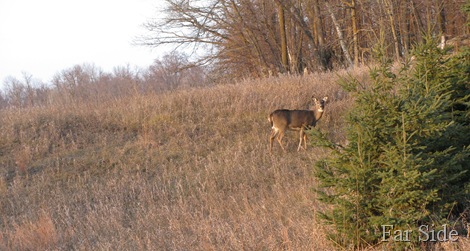 This was my best shot during deer season last year..let the camera hunting begin:)