I finally captured the eagles

Chance and I have been out to check on the dead deer in the field many times. It was fairly simple to do once it snowed..there was no eagle activity. We would drive by slowly..the deer was just a snow covered bump in the field.

Sunday it was really warm, it was about 45 degrees..the snow began to melt and late in the afternoon the eagles returned. The aroma must have been too much for them to resist..either that or the lake is frozen over in their favorite fishing spots.

They seemed content to pose for some photos.  They hopped around a little but didn’t fly away.

There was a plane buzzing around. 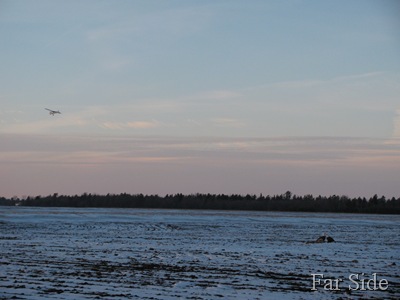 See that speck in the sky?  That is Reino flying around, his wife is part of our carving group.  I asked her if her hubby was out flying around on Sunday afternoon..she said “Oh yes.”   So I will print her a photo..it isn’t often that you get a picture of your husband soaring above some eagles.

Yesterday it was a rainy, icy, snowy mix. This morning it is snowing ..not enough to warrant a snow stick photo..but enough to make the ground all white again..it is 16 degrees F or –9C for my Canadian friends.  Today is the last day of November..other than the arrival of the snow and colder temperatures it was a pretty good month:)

WOW ! Wonderful photos, my hubby is trying to capture the eagles here as well but as we know they are crafty devils lol ! Have a great day !

Great pics! I like the second one the best.

When I saw your title my first response was, "good, keep them there!" But then I realized that you captured them on digits. Well at least your fellas are captivated by a dead deer and not going after some little girl's pet duck. Sorry to hear that you have more snow, I'm staring at soggy green grass, that looks like it needs to be cut again. There is still a little bit of ice on the pond, but without the snow the otter seems less playful, I think I know how he feels.

Eagles are so beautiful! We saw one on Friday while taking our sister-in-law on her tour down here.

WOW! To think there are eagles so close to you. I have to really look for some here. Now if you are interested in a raven or a crow or a red-tailed hawk...I could get lots of photos of those, but and EAGLE I have to really really search for.

Sooo worth waiting and lurking for!! :):)

I know how you love those eagles so I was thinking you "captured" them. It looks like I'll end up with a couple inches of the white stuff over the now frozen rain from yesterday.

Great photos Connie. Hope you all enjoy your afternoon.

That is so cool. Such a good photo.

Very nice photos; it looks like evening from the light. Eagles are majestic birds, always nice to see them thriving. Thanks for posting!

It is a long awaited shot. They still looked cold out there in the barren field, except for the dead deer.

That is awesome! We saw an eagle on our vacation at the lake and the camera I had couldn't get a close enough picture and that didn't make me happy. Never saw an eagle before that!

Awesome capture....when I read the title I wondered if you'd caged them ;)

That will be a great picture for your friend and worth the wait.

Woohoo girl, ya did it. The pictures are as magnificent as the eagles.

Ahhhh, their not eatin' those 'stupid' fishermen are they??? Heeehehehe!

God bless ya and enjoy your day sweetie!!!

wonderful capture!! I love getting shots of an eagle..but TWO??? Amazing!!!

I think eagles are about the mightiest sight ever. I can't imagine anyone not catching their breath when they see them.

Wow - great pics of those magnificent eagles. And thanks for the temperature in centigrade - that's what we use in Europe too.