Recently I went through some of  the old photos that belonged to my Grandfather and Grandmother Y.  Amongst the photos were some interesting  Real Photo Postcards.

Real Photo Postcards were all the rage in the early 1900’s.  You could have your picture taken and have it made into a Postcard, and then send it to your friends.  The cost for the postcards was usually about a penny and then it cost you a penny to mail.  So for two cents you could impress your friends.  You could also keep them. 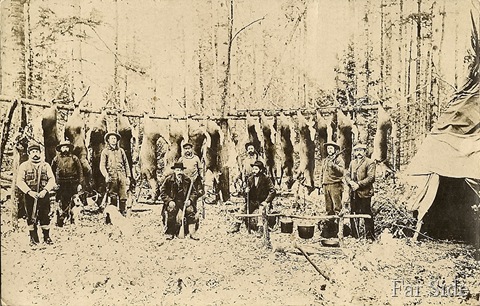 This one is from 1910. An early hunting camp in Minnesota.  None of these people look like my Grandpa..and nothing is written on the back of the postcard. Nine men and fifteen deer, it must have been a good hunt.  They have a fire going and someone has slept in a Tepee. 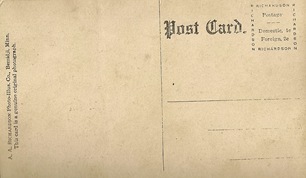 A. A. Richardson had a Photo Illustrating Company in Bemidji, Minnesota in 1910. ( His business only survived a year.)  He notes on the postcard: This card is a genuine original photograph. 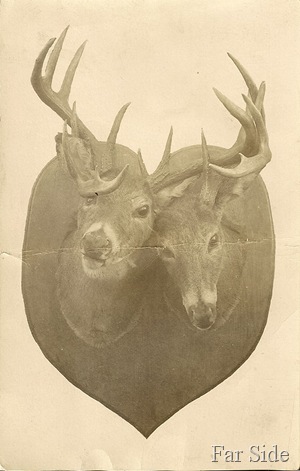 This postcard also from 1910 is what I call “No compromise” or “We are stuck together..forever.” There was no Photoshop back then..this is obviously an original genuine photograph! Who knows if these two bucks were entangled to their death or placed that way by a taxidermist.

I find these 100 year old postcards that my Grandfather kept very interesting.  I wonder what I have kept that I haven’t marked.  In 100 years will someone say  “What was Grandma thinking?” :)

Maybe they were Siamese deer.

You think it'll take 'em a hundred years to say that?

I have found that taxidermists like to mess with people's minds - jackalope ring a bell here? Not to mention, do does have antlers?

By the way, on Saturday or Sunday (days blend together here) I wrote a huge comment for the beaver statue post but my computer died and didn't save it, aren't you lucky. But you did ask for our opinion on the matter didn't you, that could be a dangerous thing you know. To sum it all up... I think the word art is over used, and that opinion had nothing to do with the inclusion of the body part in the "art". Now the postcards and the taxidermy, that is art!

That's one heck of a lot of deer in the first photo! I wonder if they were more plentiful then, well probably:)

When I had to empty out my Mom's house, I loved finding things like postcards, old letters, or notes written on scraps of paper. The thing that baffled me was how many empty Cool Whip and various other plastic containers she had stored in the cupboard. How many can you possibly use at one time?

So very interesting girl! I thought I'd found a find when I found some 1950-51 post cards stuck back in my Mom's scrapbook. I also ran across a 1950 Guam calender with only Dec. left on it.

That huntin' came scene is quite impressive.

God bless and have a marvelous day :o)

I love old photcards also. I THANK you for sharing these...so perfect for the season.
Linda
http://coloradofarmlife.wordpress.com

Wonderful postcards ! I to loved what I found when I cleaned my mums house out after she had passed, all the old photos, postcards, letters and such and I even found a love letter that my dad had wrote and sent her from when he was in the war, how beautiful it was. What a great post ! Have a good day !

Thanks for the reminder that we need to mark everything! There are so many pictures that only the Duchess knows anything about, it would be a shame for it to be lost when she's "gone".
Speaking of the Duchess - she is making your Lemon Cake for dessert tonight. Evidently she thinks she isn't already fat enough! Ha!!

Meat for the cold winter days to come.

Neat! That one with all the deer reminds me of some I've seen from northern Pa. Thanks for sharing!! I hate to admit how many photos and such I have never marked...my Great Aunt always told my mother to write on the back of pictures, but she never did (she thought it would damage them or something). I will try to start!

Pretty cool that he saved that stuff and no one made him throw it away. I work with some people who believe if an item is not being used, then it should be tossed. That makes history disappear.

Amazing old photographs, although me being me, I feel sorry for the deer!

One of my uncles passed away a few years ago leaving behind an entire closet filled with unmarked 35mm slides. Literally hundreds of thousands of them - mostly nearly empty desert landscapes from the 50-60's.

And of course he isn't in any of them (that I've looked at so far!)