It is I the blogging Border Collie, I get to blog again today.  Far Side is off dusting and cleaning the house..she hosts Cousins Club here tonight at MY house.  Oh and she is baking something too..With all the  baking and cleaning she ought to be in a truly memorable mood by the end of the day. Far Guy and I will probably boogie right on out of here after supper..either that or we will go upstairs and play with the trains. Well I guess that Far Guy will play with the trains..I will be on duty smelling for the desert to be served..then I will sneak downstairs.

How about a trip to a lake?  Alrighty then..how about Bass Lake, there are only four of them in Becker County.  The one we went to is in Shell Lake Township and it is just south of Shell Lake. We went on this adventure last Friday afternoon, November 05, 2010. There is no snow..and the lakes are not frozen yet. 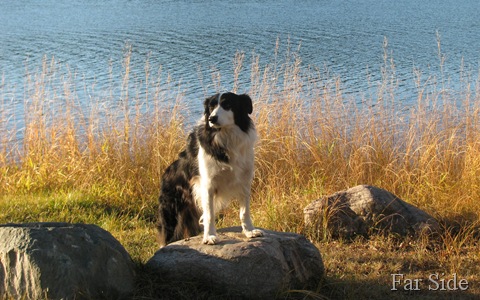 This is my best  Rin Tin Tin impression.  Far Side loved the Adventures of Rin Tin Tin..did you know that the original Rin Tin Tin was saved during WWI as a five day old pup?  A soldier by the name of Lee Duncan rescued him in France. Later they both would train dogs and handlers during WWII.  Far Side loves Rin Tin Tin and Lassie..she watched a Lassie Movie the other night..then when she walked out of the room and came back a few minutes later..she said “What happened?” Far Guy said   “Well Lassie died.”  She said “Impossible, Lassie never dies she is a survivor.” Sure enough about that time a poor bedraggled limping Lassie peeks over a bunch of rocks and  takes off into the sunset in search of her owner, she walks for days but finally finds her owner a young boy at school. The reunion was wonderful..and everyone cried.   Kinda sappy stuff if you ask me..but Far Side says TV is full of all kinds of crap that is not fit to watch..murder and mayhem are on nearly every channel. Oh well..back to the lake. 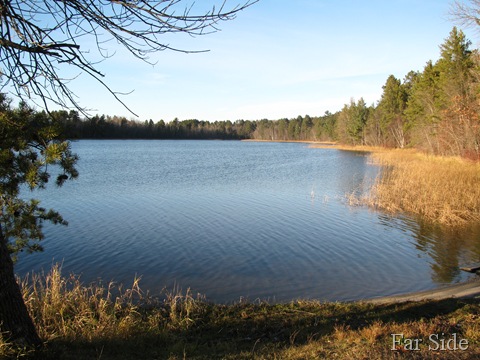 This is the northern most end of Bass Lake at the Public Access. It is a 135 acre lake and you might catch some Northern Pike or Crappies here.  Far Side used to come here in the winter with her Father to the fish house.  The rumor used to be that part of this lake was bottomless..but apparently that was just a rumor..it is listed as being only 49 feet deep. 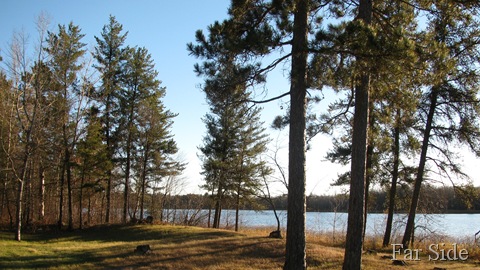 We had the public access all to ourselves..I had to do two different modeling sessions.  Wanna see the second one? 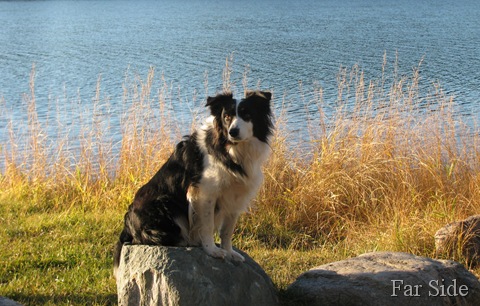 Perfect..Far Side said I was just perfect..well I already knew that. 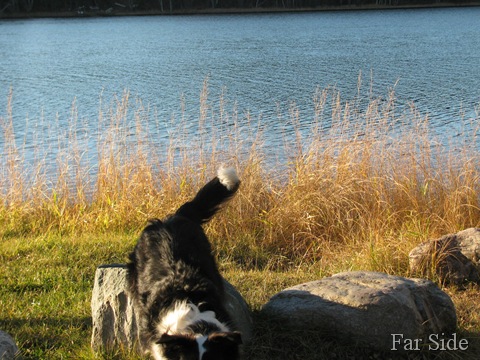 Well, Chance, I was wondering when you would be coming back to Blogland. It always seems like such a long time, but that's just because I don't get to pet you and play with you like Far Side and Far Guy do. Looks pretty sunny and bright in your part of the world. Thanks to Far Side for taking pictures of those great poses...

Great Blog - I wonder if Odda or Hooch could write!!! he he!

Chance, you are beautiful! Thanks for sharing the lovely lake with us. I hope it all goes well for Far Side tonight.

You have lots of lakes to visit, lucky you! Our dogs expect every lake to be a swimming/retrieving extravaganza, and are pretty ticked when we decide the water and weather is too cold. They would have loved to have been with you, it looks like a lovely day:)

Yeah! I love the Rin Tin Impression - if it were not for the wonderfully floppy ears, I'd give it an A+!!!

Adventure's with Chance are sure fun.

You do a great Rin Tin Tin impression that's for sure.

I'm positive that you will find it interesting to note that I have a "Rin-Tin-Tin Book of Dog Care" in my meager book collection. Also that as a child I always wanted a Lassie dog, dare ya to name four girls born around the fifties who didn't. Satisfaction on that point was not to be. My father was a hunter, Lassie didn't hunt anything but lost children, so my childhood was filled with Labs and Spaniels (and a Manx cat my dad tried to buy me off with). My Spaniel lasted well into my adulthood and with marriage came a succession of Airdales. But then Dirt needed something better than me and three little girls to help him corral the sheep. So I sorta got my wish finally with our first Border Collie. Come to find out she was better than Lassie, but I bet you coulda guessed I'd say that eh?

CHANCE: Do you have access to Far Side's PC?
........Because I am guessing that if you start now and compile all your "BLOG" entries into a tell-all book........it would be a BEST SELLER!

Memorable mood - - - LOVE it! All women get to have those when they are preparing for company to arrive because the women are generally the ONLY ones preparing for the company!!!!!
However, I know you don't mind an occasional memorable mood because she is sooooo good to you all the rest of the time. After all you are the center of most of her beautiful pictures. I am glad she let you have computer access to share her recent shots while she is busy. The bigger question of the day though is was it worth the wait for dessert?

Hope you got some dessert, Chance!

Those shots were perfect. ;)

Thanks for the tour Chance!

You sure have lot's of beautiful lakes around there! You look wonderful, as usual, my handsome friend :)
Did you find out what Far Side was baking? Did she share?

What glorious autumn weather!
Tell Far Side I always cry in Lassie films... well, in almost ALL Disney films too!

Great job Chance! The picture of the lake is so realistic I can almost smell the fish!

When I was just a chicklett I had an Aunt who lived with us to attend High School. Every time Lassie was on she would either tell me that Timmy or Lassie was gonna die! Now if that wouldn't traumatize a gal! Well, it just might explain allot...:o)

God bless and have a great day sniffin' out desert!