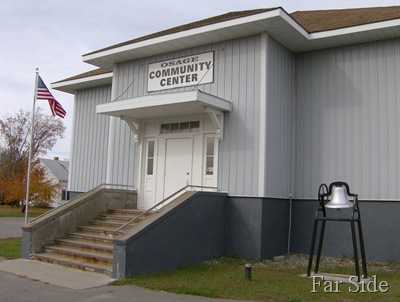 The bell displayed near the front of this building was cast in 1898. It was put into use shortly after it was cast.  It has quite a history.

It originally sat in a belfry in a two room schoolhouse in Osage and summoned  children to school.  It rang to assemble the bucket brigades that fought community fires and it rang for hours to tell everyone that World War One had ended on November 11, 1918.

The bell was moved to the new school house ( the photo above) in 1938 and sat upon a pump house on the east side of the building. It summoned new generations of students to school.

Sometime or another the bell was taken down and put on this platform which sat outside of the old school/ Osage Community Center..which at that time was known as the Senior Citizens Center. 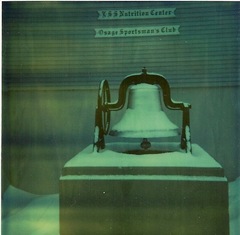 Members of Far Guys family ( his Uncles and his Father) donated this platform for the bell in loving memory of their mother Tracy ( 1895 to 1983).  This is an old Polaroid..this photo may have been taken by Far Guys Dad as he was notorious for his Polaroid's. 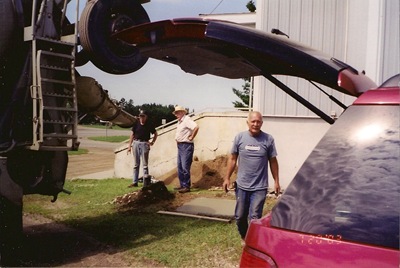 In July of 2003 Uncle Arch, Uncle Jim and Far Guy tore down the old platform and had a new cement slab poured. It was quite a project.  ( Photo by Auntie Esther)

One day the phone rang and it was my cousin Arthur, he is a Town Board Supervisor..the bell had been moved. On election day we found it in it’s new spot. 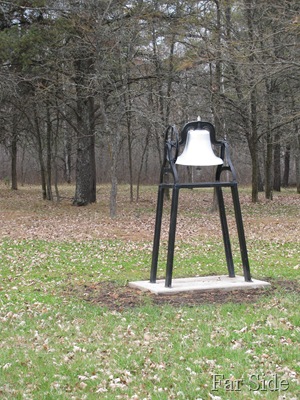 The bell was moved before winter. No, it is no longer in a school yard..but it hasn’t been in a school yard for a long time. It does seem rather lonely all by itself behind the building, but we were told that eventually this may be a picnic area.

Can you imagine what it sounded like in 1918 on Armistice Day..can you imagine all the people running to the school to hear the news..and all the children taking turns ringing the bell:)

What a wonderful story! I love history. It is so wonderful your family is involved in its continuing place in history.

I still think of the day as Armistice Day, not Veterans Day. I love the bell, the history, the story of your family's history intertwined with the bell's history. Must be nice to have been born and raised in the same part of the country. I went to so many different schools I cannot imagine what it must be like. You give me an inkling, though. Thanks!

Beautiful story and photos. We have a historical bell in our community as well with a story ! I love the history of towns and villages ! Have a great day !

It'll be nice to have the bell in a picnic area...I bet it gets rung again...

Amazing how much history that bell summons up! Wonderful post.

Great story. I hope they do put some other stuff around it like the picnic area. It is great they saved it though. History needs to be preserved.

What an interesting 'bell' story. You always tell the greatest stories around your pictures.

The bell reminds me of the big old dinner bell my Granny Walden had on their farm. I always loved ringin' the big old bell!

It would have sounded beautiful that day!