When I write Wistful Wednesdays I look back through my many files of old photos until a photo strikes my fancy. A photo that begs to be written about. 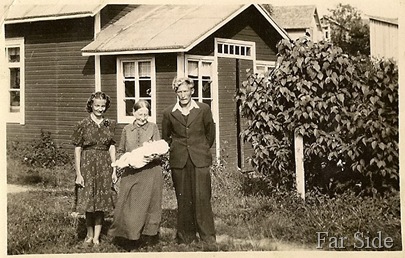 My first thought about this photo was “ Someone quick grab that baby, that old lady is going to drop it.”  My second thought was “Who are these people?”

To the best of my Aunt Anna’s  recollection these are people from Finland.  It seems my Grandmother sent a box of clothing to Finland after their wars..because the Finnish people had nothing.  The Finns being in such close proximity to the Soviet Union fought them during the Winter War and the Continuation War, they also fought  Germany during the Lapland War.  The Finns survived, but their economy was a mess…some of the Finns lost all of their possessions from being burned out during the wars.

This is a photo that these Finnish people sent back to my Grandparents to thank them for the clothing. This photo was probably taken in the late 1940’s.

So on this eve of Thanksgiving..if you have clothing be thankful.

You should be thankful for clothing in another way to..IF I were in charge of the TSA you would all be flying NAKED.  That would put an end to all the protests and complaints and mamby pamby whining about full body scans and “pat downs”:)

You folks up in Minnesota have been having such fun lately at the beach, the ice, the snow...we'll get there, but not quite yet...and we won't be flying there either...

Does that house look like a Finnish house? hhmm...

Oh bestow my heart, I want to grab that baby up also!!! Heeehehe!

Yep, I can see it now...naked in line. We might just watch what we gobble up at the table tomorrow if we were. :o)

God bless and have a most wonderful day!!!

Yikes! That old lady is definitely losing her grip. Of course, she is wearing someone's old dress, too, so that might be part of her problem: it doesn't fit right. I hope you have a super wonderful Thanksgiving, Connie, and make sure Chance doesn't get any bones!

Its a mite cold for flying naked.

I hope you have a fabulous Thanksgiving - thanks for being a part of my year.

Hey, have a great Thanksgiving. I am sure there will be lots of family somewhere getting together.
Naked huh? Are you sure you aren't a retired Army nurse? Chance and Far Guy have a good Thanksgiving too.

You crack me up. My thought is the whiners need to re-view the news footage of the Twin Towers in NYC being destroyed by crazy terrorists on planes. Then we could put them in a simulator to see what it feels like to crash. After that, if they still whine, I bet we could dream up something else! Perhaps, they could visit with the NYC victims' families and see if the families feel sorry for their pat-downs!
I, too, pray for a great Thanksgiving for you and many more wonderful photos of Chance for us to enjoy!

Happy Thanksgiving to all!

Please don't send us whiners to Mamby Pamby land.lol
Hugs to all of you

Far Side, Salonen is a Finnish name, though I don't have a drop in me. My husband does, of course. That baby does look close to being dropped. Yikes! Glad this was shot before the baby went tumbling. :)

What a wonderful photo! Love the contrast between the woman in the long black dress and the younger woman in a colourful flowery dress...

You're right - we should be grateful for clothes.

As for the fuss about those new X-ray machine thingies, most people in Europe realize they are a necessary evil. The very people complaining about them will be the first to complain if something happens again!

I'm with you about the whining. But the thought of squeezing in betwixt my seatmates in A and C, Elbows and Snot-Snorker, with everyone naked, well...Amtrak's looking better all the time.

I have clothes, I'm thankful.

Hoping you have a Happy Thanksgiving. We do have many things to be thankful for. As for the whiners, I'd have to agree with Miss Lynda.

Have a wonderful Thanksgiving, my friend!

Hummm a whole bunch of flying nudists...now that would be something.