My girl cousins get together once a month.  Last Tuesday was my turn to host.  It was a good turn out with seven of us present.

One of our projects is always a quilt that we give away at the family picnic in August.  This year the theme for the quilt is something patriotic.  I have not decided what I am going to do yet, no doubt it will be an embroidery or a cross stitch pattern of some sort.

The desert was a hit.  I am not sure where I got the recipe from..but here it is.

Next Layer:  Mix together one 8 ounce package of cream cheese, one cup powdered sugar and 1/4 teaspoon of vanilla. Spread on the crust.

Chill for 3 or 4 hours. Sprinkle the top with pecans, whipped cream or dried cherries. 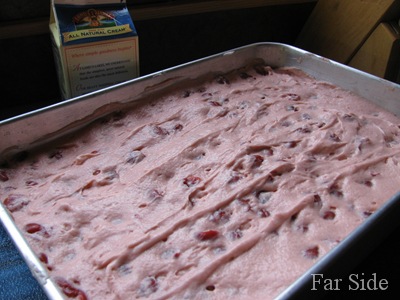 I doubled the recipe and put it in a cake pan.  Everyone seemed to like it and it was a surprise for most of them as I usually bake my old standby Lemon Bars.

Last spring my Aunt gave me a box of old family photographs to scan.  I finally finished with that project and CD’s were made. Everyone took photos to return to the people in them… 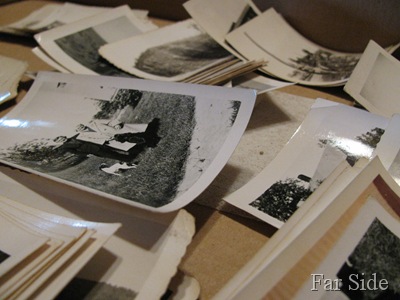 I still have a small box of unknowns. A few must be mailed to their owners.  It was a good project.  My Father, My Aunt Anna and My Cousin Chuck were very helpful with the identifications.  These were old photographs that were part of a collection from my Grandmother and Grandfather.  There were many people that my Grandmother used to visit in Michigan that we could not identify..some of these people were obviously very near and dear to her. Those stories were never told..never passed on to the next generation. Grandma just went to visit people in Michigan and that was it, her sisters often went with her.  My Grandmother lived in Michigan until she was 21 years old,  perhaps she went there to revisit her youth. 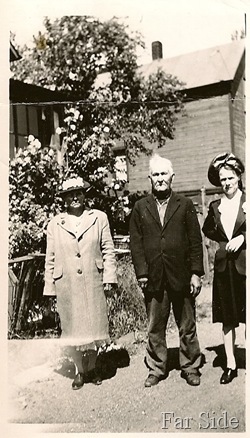 When Grandma went to visit she wore a proper visiting hat, my Grandmother is on the left, then an unknown man, and Great Aunt Pearl or Helmi..who wasn’t really an aunt but that is a whole different story. There is nothing written about this side of the family.  Someone should be asking someone questions before there is no one to ask anymore:)

Glad you had a good turnout for the reunion and the dessert sounds very good. Can you imagine having to wear a hat to go visiting today? I know everyone was pleased to get cd's of the photos that could be identified.

Sounds like a wonderful time ! Love your new header !

Hello Auntie!Any good photos of my Grandpa Hjelmer? It would be fun to see them. I always appreciate all that the cousins do. Love you

I love how you all make family and family heritage a priority. It is a good lesson for the rest of us. I admire you getting those projects done, too.
- - - - but there is a more important question - - - did Chance get any dessert or was it too rich for his blood?!!

Your Cherry Cheesecake sounds so good I will have to try it.

The cheesecake sounds delicious! My girl cousins and I have talked about getting together for a reunion but have never done it. We are scattered all over the US.

Speaking of questions asked.......next week I will be asking my aunt some questions about my mom!

Debra Ann Rae, Sorry no photos of your Grandpa..but there was a school photo of your Uncle Gerald.
Miss Lynda, Yes Chance got a little of the crust and I did let him lick a spoon.
Gayle, Most of us live within twenty miles of each other..two are further out in opposite directions of 50 miles. We have been meeting once a month since 2001.:)

Yup, the dessert was good!

Love the old shots... definitely important to learn more about our family history.

But what has stopped me in my tracks is the fact that you baked!

What a wonderful tradition to have all your cousins get together and then the quilt too!

Cheesecake looks good but I'll take any leftover lemon bars my all time super favorite.
btw. Thanks for the update on the wonderful Minnesota weather I missed. It just so happened to rain every day in Ireland... but our hardy group of warm and cheerful Minnesotans had a great time in spite of.... :)

great hat... but look at those socks. oh my.
I have a few pictures that look so much like that.
I've scanned a lot of old photos but haven't gotten them ID'd... nor onto a CD

You have the most wonderful gatherings. I hope ya'll had a blast!

God bless ya and enjoy this day sweetie!!!