Art and beauty is in the eye of the beholder

Recently I was sitting with Far Guy and Chance in downtown Bemidji, we were all waiting for Trica to run an errand.  I became bored and noticed one of the numerous beaver statues that are all around downtown on the corners.  I decided it may be worth a photograph..after all they looked artsy fartsy.  I wandered around the statue and took a number of photos..I really didn’t take time to inspect the work of art before my photo session.  People walked by and smiled..I just kept taking my photos, of the front, of the back and from the sides..it was a very colorful fiberglass beaver. Whoever painted it did a wonderful job. 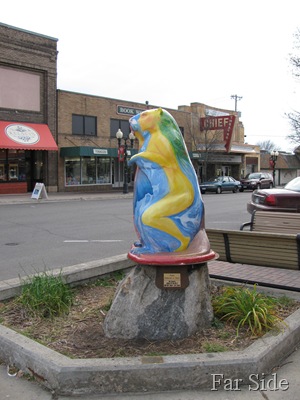 The City of Bemidji commissioned nine local artists to paint designs on fiberglass beaver sculptures.  They will be on display in the downtown area for a year and then they will be auctioned off.

Little did I know that one of the beavers had been causing quite a ruckus in this small Scandinavian town.

I have been enjoying a news black out for the summer and fall..there is just no good news anymore. Far Guy keeps me up to date but there are a few news stories he apparently forgot to tell me.  Like the beaver up in Bemidji that was taken down because a few locals complained because they thought that a vagina was painted on one of the beavers…that was their interpretation…like I said beauty and art is in the eye of the beholder. The artist explained that it was Mother Earth praying and there were circles and roses coming from those hands.

Anyway Far Guy said “I wonder where that controversial beaver is located?”  He then proceeded to tell me all of what he knew.  When Trica returned to the vehicle we asked her if she knew where the statue was located..after all she lives in town.  She had no idea but called someone who did. 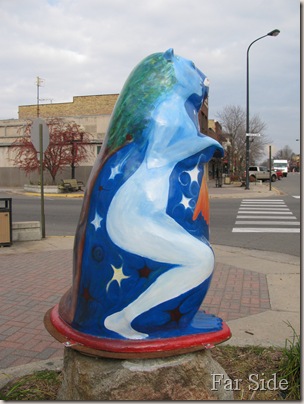 I turned my camera on..sure enough I got great photos of the controversial artwork. I don’t see what the big deal is..I suppose I would have eventually noticed..but at the time I just enjoyed the colors that my camera was capturing. I did notice the Lady Slipper that formed the beavers nose and mouth, and I thought it was a great addition. Leave it to me to notice a flower!  I do not find this artists work anything but colorful and imaginative..but beauty and art are in the eye of the beholder.

Since the painting on this sculpture is a controversial subject, I will not post a photo of it here.  However I am anxious to hear what you think..have a look at this news story ..and come back and give me your 2 cents worth:)

Yeah, I can see how it could be taken to look like a vagina. Oh well, we will see what we want to see.

OH! BOY I had to laugh and laugh and laugh. Since you told me what to look for of course I saw it, but if I hadn't known I don't think I would have made the same 'discovery"/

No ladies, that's the flower, the inappropriate part has been cropped out. I think talking about vaginas is shocking. I think it is good to be shocking!

Since you mentioned it I saw it, but if I hadn't any clue I would have just seen the beauty of the flower.

After checking out the news article, I think I actually this one the best!!!!!!!! jo

I would not have thought that unless someone pointed it out and can now see how it can be construed as such. To me, it looked like a 'being' with fairy wings or maybe a flower. Guess I am just 'common' when it comes to art because I prefer something to look 'normal' - - - instead of a mural on a figure, dress the statue with paint clothes like a doll. You can paint a design or pattern on the clothes but when you look at the statue, you can see the face, etc. without a problem. . . . . like the other statues . . .

I may not have seen it but I do now that the word was look for the vagina. I did not see mother earth or rose's.

"Davis wasn't gonna take this lying down." Sorry, that statement just cracked me up! What can I say....I'm twisted! Heeehehehehe!

I probably in all my naivety would have never noticed the Va-Jay-Jay but now I'm blushin' a bit!

God bless ya and have a wonderful weekend!!! :o)

I thought of a gutted fish when I saw it...go figure.

I guess there is controversy no matter what, huh? Some of those folks have too much time on their hands!

Laughing like crazy.....what a world we live in but I guess it's how you look at things;)

LOL - is that why they are called beavers?!

It looks like a woman in a red veil and cape to me... but now that you mentioned the word vagina, I can see why people might think it resembles one (but I think that's because I already had the idea in my head).

I love the colours and if you look at the sides of the beaver, you can see quite clearly that there is a woman praying.

Hilarious! Well I probably wouldn't have thought of that myself, but once it has been suggested, well then that's all I can really see. It did make me think a bit of two wolf heads howling at the moon though:)
But shouldn't it be called a vulva rather than a vagina?

I wouldn't have gone there, either. Be a really sickly, odd looking one, if you ask me. All those flowers falling down now look like some kind of polyps--ROFL!

They did the same thing up here in Fargo with Buffalos. None of them were accused of having vaginas, tho. ;)

This eye-of-the-beholder situation reminds me of when Marie took a sculpting class on Everybody Loves Raymond--hehe!

Wikipedia says art is the product or process of deliberately arranging symbolic elements in a way that influences and affects the senses, emotions, and/or intellect.

I think the artist did her job well.

I think all the beavers are beautiful! I saw a vagina but not sure if I would had if you hadn't pointed it out. Even if it is it's still very pretty!

I suppose that the city of Bemidji and others would also ban the statue of David and many of the other fine, old statues and paintings of the past; just too much for some to understand...

People are funny. Brainerd has the ox. Fargo has the buffalo. Maybe Bemidji's mistake was using the Beaver in the first place! Or, was it?

I see it. Georgia O-Keefe style for sure.

10 miles south of us is a little town in Oregon that is full of frogs. I keep thinking I'm going to go take photos of their frog art.