It had to happen, sooner or later we had to get the third snow. This is the one that usually stays for the winter. No happy dances were performed during this event. 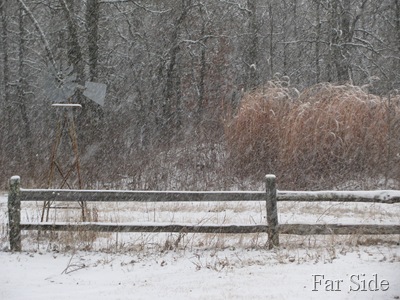 Yesterday was miserable, the roads were icy and snow covered.

Far Guy made me a snow stick.  You might see more of this stick over the winter. 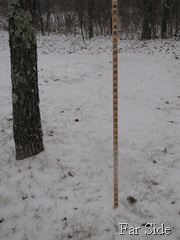 We put it out in an area that were we don’t remove snow, we will have to see how it works out. 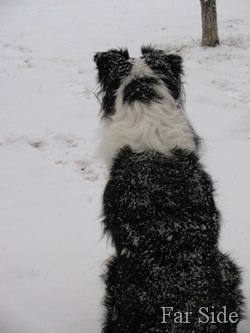 Chance catching a few flakes.  He likes the snow, it makes him energetic.  We had to go out and play ball again in the dark..in the snow..he is becoming more obnoxious about playing ball in the house with the cold weather.  You have to watch where you walk as you could step on a ball. I will be fine as long as I don’t step on two at one time. 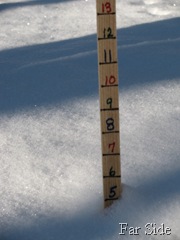 Yup, just about five inches of beautiful sparkling snowflakes have piled up in the last 24 hours.  Today the sun is shining. 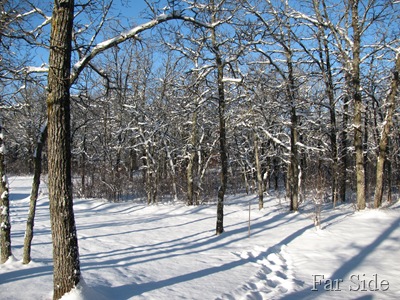 You can see my path over to the snow stick.  I am not quite ready for winter to stay…after all it is a whole month yet until the first official day of winter.  I have lived up here in the Northland all my life, except for a few glorious winters that were spent in Colorado and Florida.  In Colorado it snows one day and melts the next and it hardly ever got forty below zero, and well Florida speaks for itself..sunshine and rainbows all year round.

We have more snow and possibly a snowstorm forecast for tomorrow and Thanksgiving.  I doubt that we will travel to where we were invited, way up north about a four hour drive one way when the roads are good. That doesn’t sound like any fun at all..eight hours in the car for a Turkey Dinner..possibly I could warm up some soup or something:)

Hi Connie, It seems so early for cold and snow. That's a beautiful shot of Chance in the snow. I don't blame you for staying off the roads when they are icy. Just the two of us this holiday also but at least we have mild weather. Sending love to you all.

Oh dear, the snow is beautiful around your home. Do you know if the Minneapolis Airport ever closes due to snow? I may fly there from Calif. in December and then drive to Eau Claire to visit my sister. Is that do-able?

Love your header how do you do that with the pics ! wonderful photos and post. It hasnt snowed here as of yet but its windy and cold and gloomy I just put on the woodstove and poured a hot chocolate, Have a warm day!

Great snow stick. It will be interesting to see how deep the snow gets there. You are having winter conditions there and we have cold but sunny days here so far.

I think the snow is beautiful, only because we haven't gotten any yet here in Michigan.
My Sheltie is like Chance....we have neon green tennis balls alllll over our living room!

COLORADO!?!?!? Where? Close by me at one time?!?!? You are so right...snows and then warms up and turns to mud and the snows and an inversion drops down and everything stays frozen --like in the Ice Queen. For weeks and weeks. Unless you travel on up the mountain then its all sparkly and warmer.

Dang. If you ever come on back...come se me!

I just laughed out loud (it was actually more like a snicker) when I thought of you stepping on two balls at once. We got snow and now we've got streets and sidewalks slick enough to break a leg or two, so why did that seem so funny to me? Better be careful or the Karma Fairy will get me.

We have been lucky so far but I think tomorrow will be the day. People took off a day early to travel as they knew it was coming. Hey, I saw Shiny Brites at Menards today. I thought of you. They had a larger variety this year with the price of fifteen bucks a box. If I buy it will be after Christmas. They have some indents and they have a lot of glitter on some of them. When do we start posting or Christmas stuff? Soon, right!!!

Life is an adventure for Chance no matter what the weather is! Remind Chance that animals usually slow down and hibernate when winter arrives!!!!!

Lovely snow pics - because you have sun! Which we haven't seen for quite a while. We're having a real snowstorm here (the second Level 2 storm) with lots of ice... not my favourite weather as it's hard to walk anywhere.

Terra, The Mpls-St Paul Airport may have some delayed flights but they hardly ever close for long periods of time. Eau Claire is not real far from there..a couple of hours..the worst part is the one turn off that goes to Wisconsin..you have to be in the correct lane or you miss it! Bring snow boots!
Country Gal, I use a Scrapbook Program called Memory Mixer to create the headers!
Linda/Dayphoto..Denver. Far Guy was at Lowry Field the winter of 1973.
Larry, I bought a set last year..I won't be able to resist this year either, but maybe I can wait till the sales! ..yes Christmas posts should start AFTER Thanksgiving..I can tell you are chomping at the bit!
Thanks everyone for your comments! :) Connie

Oh my goodness. I hope you don't need inches 24 and up this winter! I don't want any snow this winter here - I have to shovel 3 driveways. Now if the stuff could be trained to not fall on the roads and driveways I'd be much more welcoming of it!

Well, I think that the snow is beautiful....on other peoples blogs. LOL.

We have a very unexpected [by me] and early snowfall of 5 inches here. Frosty cold, bitter would be a good word. -10 C. if cold in a condo.

Dig in, be creative, pop popcorn, and hibernate.

See you in the spring, just joking.