Bovey Minnesota is a quaint little town, population 662.  You have to go through Grand Rapids and skirt the edge of Coleraine then head north to Bovey..it is just a hop skip and a jump from Coleraine.  Far Guy said “Isn’t it weird that these two towns are so close together?”  It made me wonder.  The story we heard from a local was this ..Bovey was a mining town back in the day, and it was full of brothels and bars.  When the owner of the mine wanted to move his family to the area he said that he would have none of that around his family..so just down the road he started the town of Coleraine, Bovey kept its brothels and bars and Coleraine became a nice family town.

I found out later that John Greenway a former Rough Rider with Teddy Roosevelt was hired by the Oliver Mining Company to start a mine at Bovey, he picked Coleraine as the new town, named it after Thomas Cole, President of the Oliver Mining Co. and in 1920 Coleraine was considered a “spotless” community safe for miners and their families.  Sin filled Bovey remained just to the north of town.

Well, what brought us to Bovey? An Antique shop of course..actually it was more of an Antique Mall..two levels of treasures.  They also serve lunch at huge round oak tables that are placed in front of the sunny windows that are filled with sparkly colored glass bowls and vases in all shapes and sizes.

The chalkboard announced “Sarma” freshly made!  We asked our waitress “What is a Sarma?”  Far Guys cousin highly recommended it.  But we are both clueless.  Our very friendly waitress explained that it is hamburger and rice with seasonings that is rolled in a cabbage leaf and then the whole thing is covered in Sauerkraut.

Yummy!  I love sauerkraut..but sometimes it does not love me and gives me terrible gas. Far Guy has never appreciated cabbage in any form so his decision to have a Canadian bacon, turkey and cheese sandwich was understandable.  I had to think a bit..hmm..going to a thingy at the Library tonight..small room,  lots of people.. guess for their sakes I should pass on the gas producing food.  So I ordered a sandwich also.

Well wouldn’t you know it, the waitress was so nice and friendly, she was a Norwegian from Hibbing. She brought us a Sarma ..and said “Here try this..it is on the house!”  It would have been rude to refuse.  I was still thinking about the gaseous explosions and how my stomach sometimes rumbles like a huge mountain whilst it produces that gas.. all the while I devoured the Sarma.  It was good, however I do prefer my sauerkraut a bit more sour.  Far Guy took one small taste..and made a face.  He then said “I would have to be starving to death before I ate that.”  Our waitress being from Hibbing and all told us that up in Hibbing Sarmas are served with a tomato sauce,  there is a political correctness code about the Sarmas, and that they never would be served that way down in Bovey.

Sarmas are a Serbian food, and it is one of those special foods that is served during holidays and special occasions. I took several tums after I ate..and thank goodness embarrassing gaseousness was avoided. 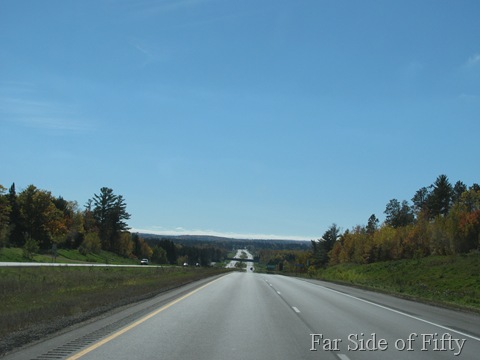 Whilst we were  having lunch the sun came out..this is the road between Coleraine and Grand Rapids..heading west.

What did we buy..well lunch and  a bag of old wooden thread spools. Why?  We are wondering the same thing. We both saw “something” really cute carved from a wooden thread spool. We cannot remember what it was..we have to wait till one of our friends shows up at carving again to refresh our old fading memories:)

One of the local restaurants serve sarma as an appetizer. While I am not crazy about it and wouldn't specifically order it, it is tasty.

I love sarmas - I just never knew they were called that! I eat them mostly the Hibbing way, with a lovely tomato sauce. Ahh to know what one is doing, adds a bit to perspective eh? Wonder who in my not so distant relatives was Serbian or had a Serbian neighbor?

Another possible use of your new treasure... I had a marionette made from wooden thread spools.

...or you can just keep those wooden thread spools in a basket like my grandmother did...

I grew up in Hibbing and I liked sarmas a lot. But the thought of tomato sauce on them makes me wrinkle my nose... funny how our tastes develop!

That's my kind of day trip. Food and shopping!

enjoyed the history of the two towns. this food item, my mom made often, but according to her cookbook it was stuffed cabbage. no matter what, you have to watch that "gas line". rose

LOL! Glad to hear you didn't go to Bovey for the sin!

Fabulous picture of the blue blue sky and road.

Sounds like a "cabbage roll" to me. Good tri pfor one day and choice buy...the wooden spools.

I am not familuar with this dish , please tell me what it is. The trip sounds wonderful nice pics ! Have a great weekend !

We use to go through there to go to Duluth from Grand Rapids. Your making me homesick for something I can't go back to. The good old days are gone. The weather always covered all the temperatures in all the little towns around there.

What an interesting post...I have never had a Sarma but I would like to have one now.

Hang the meeting...somethings need to be tried. :)