Yesterday we went to a tasting… a beer tasting. Our son in law Handy Andy is a home brewer. Beer is an art or so he says. 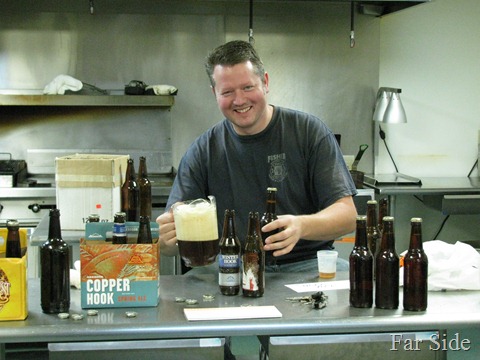 See, he could sell his own beer. Note his fancy cup, yes it is a urine specimen container.

This is the “beer club.” 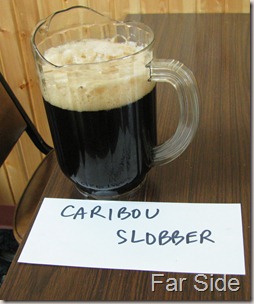 There were many different kinds of beer to taste. I did not like this one, however I did appreciate the brewers sense of humor. 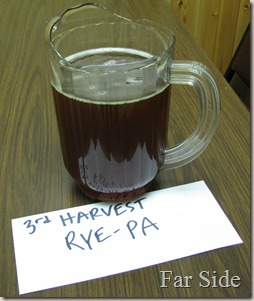 There were darks, there were lights..alts and stouts…some with foam and some without..what do I know about beer..not much.  I was the only taster in our group..Far Guy gets horribly ill from home brew and vomits for days..and Jen doesn’t drink beer. Well neither do I.   There were twelve samples to taste, about two swallows a taste.  I only tasted four or five of them.  I then declared that even though I walked over to the tasting I would certainly need a ride back to the house, so I could sleep it off.  I have now had my beer for the year.

What would a northern Minnesota beer tasting be like without a little music? 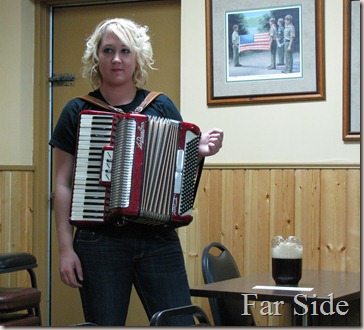 This is Andy’s sister an accomplished Accordion player. I requested an old favorite “In heaven there is no beer that’s why we drink it here.” She didn’t know that one..the tuba player that was supposed to accompany her was a no show. We really know how to have fun up here in Minnesota..ya u betcha:)

My husband would of loved doing the tasting for you! I like beer but I prefer the light stuff!

I don't like the taste of malt, so NO beer is good, to me. I do like a strawberry honey mead, though ... that's good but I haven't found anyone to make it around here.

The beer might be good but it is your dog that I love. Oh my....do they come more beautiful?
Thanks for sharing.;)

How is it possible that a dog actually SMILES? Your new header shows Chance at his best. And I am a beer lover, the hoppier the better. I wouldn't have had any problem tasting those good looking beers over and over. And I would also have needed a ride home!

I would be a bust at a beer tasting party, I have never found one I like.

I would have enjoyed the music.

YOU ARE SO FUNNY! LOL

Funny that you have a post of this lol My dad brewed his own beer for years and made wine as well, and get this both my dad and sister had and played the accordian, my sister still has it. Looks like a great day ! Have a good day !

Caribou slobber - what a great name!

My brother used to make beer and keep it under his bed...

I love accordion music and if the tuba had been there, you could have done some polkas. I remember them dancing the polka at my uncle's reception in upstate NY in the early 60's. It was fun and happy music.
I haven't had beer in quite a few years but I do remember how delicious one would taste on a really hot day. Don't know if I could have done those dark brews. I liked the light ones.

Haven't had alcohol for many years, but I would have listened to the accordion player--ROFL!

Chance does look like he's smiling. I love how you change your header so often. :)

Sounds like you had a redneck sort of time. When I worked in the hospital there was a guy that had been in a while, was bored out of his tree and used his urine container for apple juice which he's "run though again as it wasn't clear enough" whenever a new nurse was on duty.

Far Side, I'm not a beer girl either. In fact, I came over here thinking this was going to be a post about some fun Halloween drink. :) I did enjoy reading about the hobby of your son-in-law, and even more so since I've met him. Glad Far Guy stayed away from the brew!

Sounds like a fun time - I've only tasted homemade wine (I think it was) --- it was horrible! but to be kind I finished my very little glass....I do like beer -

Oh no! No tuba??? Heeehehehe. I love the names on the beers...sounds like a fun time had by all.

I've thought about trying my hand at beer brewing. Just what I need, another hobby. You would have thought your music choice would have been a natural at a beer tasting.

I insist on being invited to next fall's beer tasting accordion playing extravaganza! For that I would even get in an aeroplane! Absolutely my kinda fun! I'll practice my best Blanche Gunderson so I fit in and Dirt used to play both instruments and so he could fill in for the tuba player if he flakes out again! I think Luther said that beer was the evidence that God loves us, or something to that effect.