Indian Summer is making a visit to Minnesota, and staying. It can stay until Christmas as far as I am concerned.  Sure the mornings are cool..it was 27 degrees again this morning..but the days are warm..with temperatures in the 50’s.  Indian Summer has been a welcome relief after all the rain that we had during the summer. 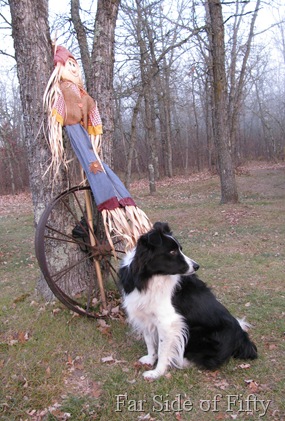 Chance and I hate that it is too dark after supper to go for our evening drive. We will have to begin going before supper.

Yesterday we washed all the windows..Far Guy helped and Chance followed him around dropping the ball against his ladder. We only have seven windows..it was the least amount that we could reasonably have..I hate washing them. The north facing French door had algae growing in the track where the screen goes..it was that wet this summer.

Hockey Season has started and Far Guy arranged a date with Savannah to attend the Sioux vs. Beaver game last Friday night. Trica was feeling up to attending the game too!  I guess the Sioux are not the Sioux anymore. I think they should just change the spelling and stay the Sue.  Chance and I were going to go along and spend the evening with the other two grand girls..but they were headed for a school dance..who woulda thunk it. Grandma was aced out first by hockey then by a school dance. Chance and I stayed home and had a nap and then played ball out in the dark.  We are totally capable of making our own fun!:)

Labels: Chance and I, Indian Summer

Indian summer is my very favorite time of year!!

the temps are cold. it beats the high 90's i don't do window very often. take care. rose

I am envious that you thought about windows beforehand - we have 54 windows - ugh! So glad Trica is better and could go to the game. Glad you and Chance had an evening of fun together. Harriet usually rides with me around the block before supper also. Hope you are still enjoying Indian Summer weather.

I have very few times when there are no kids, no hubby and just me and the dogs and I sure do enjoy those times. You betcha you can have fun!

We are having an Indian Summer here too. We didn't have much of a real summer, so this weather is very welcome. And it looks like it's going to be dry until next weekend which is great because I'm off on furlough next week!

I looked to see where Emma Rose lives, it is here in the PNW! Yes, the weather is fantastic right now, and that is all right with me. Hope to be out from under the weather so I can enjoy this beautiful weather. Chance, you keep Far Side exercised, okay?

Indian Summer has settled into my area, too, and I love it. Last year, the ground was covered with 8 inches of snow right now. I don't miss that at all. I'm with you that these wonderful days can last until Christmas without hurting my feelings any.

Continue to enjoy the beautiful days and treasure them in your heart.

We've got no rain since mid-July. I'm sick to death of watering stuff and we've yet to get our first frost.

You can tell kids are growing up when an evening with Grandma isn't number one on their hit parade anymore. I've got a few more years to go till that happens, but thanks for the reminder that I'd better spend time with them while I may.

Beautiful photos!! We are starting to cool off here in the south...thank goodness!

I know!!! Mornings are in the thirties and today the high was 84. Heat and air in the same day. I read somewhere that was a redneck thing! Heeehehehe!

Have a beautifully blessed 'fall' day!!!

Just wanted to stop by and say hi. Its been too long. Sorry
I have plans of getting back into circulation again soon
Hope you are well.

We have had amazing weather lately. But the short days do make it difficult to get out and enjoy it. That and all the fall chores!

I hate getting up in the dark but the evening dark hasn't started to bother me yet. Barney found a water barrel and mud last night so he had to get a little hosed down outside. He didn't mind but fortunately it wasn't the smelly stuff. Cold air I am not going to like around here.

LOVE your photos!! And Chance looks adorable. Sometimes I'd rather spend time with the dogs than all the kids anyway!!

I love Indian Summer it is the best part of 'just before winter' there is.