Yesterday we went on a little drive, we headed to a flea market about an hour away. 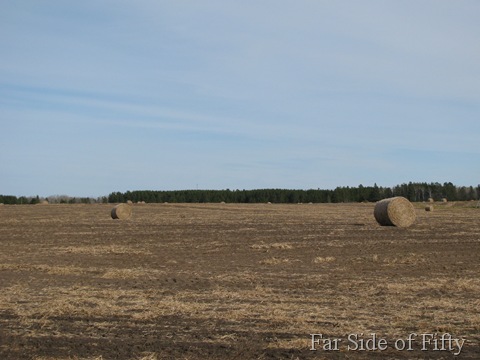 Not far from home we saw that this field of Kidney Bean vines had been baled.  I was curious what they would be used for..animal bedding was the answer that I got from Peg…she said that the vines were really hard to chop up..so it was decided to bale them.

On the way we saw this field… 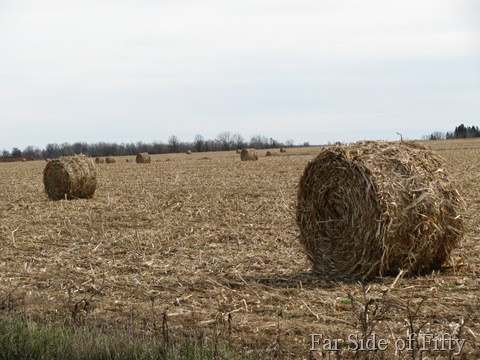 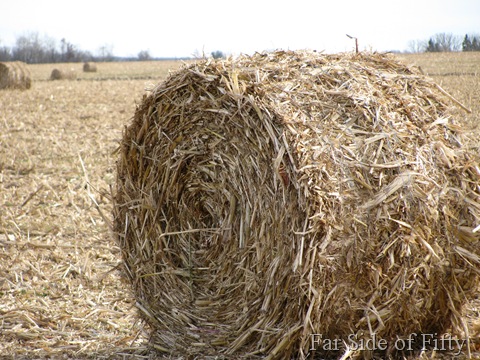 Yesiree..they are corn stover bales.  Corn stover is what the corn stalks are called after the cobs have been harvested.  This will be used as a low quality feed for livestock. I have never seen corn bales before..have you?  Sometimes the corn stover is left for livestock to graze right there in the field.  Most times it is plowed under because it decomposes and returns nutrients to the field…Corn is a heavy nutrient user.

The flea market was pretty cool..there were four buildings full of “junk” and there was lots of room for outside vendors in the summer.  I only found one guy that was selling old photos..I bought what he had that interested me. He wanted five dollars a piece..I said “Well that is too rich for my blood.”  We settled on a dollar a piece.  Far Guy found an old model car for his train set..we are pretty boring..we always look for the same thing.

All the leaves are on the ground here..everything is different shades of brown..we are still working on getting the leaves out of the yard..and yes we have a leaf blower..we just have a really large amount of trees that loose their leaves..we rake, we chop, we blow..one way or another the flow of leaves that stops and swirls right in front of the front door must be stopped:)

A couple of years ago hay was so scarce down here that the corn stalk bales was all they could buy. Cows really hate them but will try to eat them when they get hungry enough. I think it is cruel but I guess it was that or nothing. They bale up road clipping in the ditches around here as it is better than corn.

Hi Far Gal, here in N.California they bale the rice straw, the cows eat it up.

Huh! I'm assuming that corn was for human consumption. Here the cow corn gets chopped up for silage with it's cobs. Usually the stalks are still green, unless we've had a really weird hot and dry summer. Never seen bales of stalks though.

As for those pesky leaves, there seem to be more indoors than out! ;-)

I have leaves gathered at the front door and back door. My yard needs to be raked but not gonna happen.

I just chop my leaves with the lawn-tractor but somehow the leaves all end up on my carport. Go figure!!!

We chopped all our cornfields into silage this year but Farm Boy tell me there is a market this time of year for the stalks at a dollar a throw. Now, he tells me!!! :o)

Ya'll have a most beautiful 'fall' day!!!

I'd never heard the term stover bales before and thinking I was smart, asked the Bossman what "corn straw" bales were called. HE KNEW IT! My leaves are about gone all but a few.....in front of the step.

I have not heard of baling corn stalks either. You two Fars are not boring. You have lived long enough to know what you want in life!

I used to read my parents Reader's Digest and learned how to "Increase Your Word Vocabulary." I can now definitively state that there are a lot of "corn stover" bales in this area this fall. Thank you very much.

We just call it fodder and when it's in a teepee shape is a shock of corn but I have never seen it baled.

don't know much about bales, just very large. five dollars a piece does seem high glad you got that down. take care rose

Our leaves are just starting to fall around here!! Wow that guy was charging a lot for those pictures!!

I thought those vine bales were interesting also --- didn't see much there for them to pick up but they did --- very interesting....

We see many round bales of hay but never knew they could bale anything else like that. Very interesting!

We are seeing more and more of the corn stover bales around here...they are a recent addition (last 10 years) and they started when the hay was too expensive and there wasn't any hay.

I just saw a load of the corn stover bales last week. I had never seen them before and wondered what they were used for too. Most of the corn here is chopped for silage for cattle feed.

Round bales, I'm getting use to seeing them around here, hopefully there will always be regular bales too.

Ya know, what about something like a snow fence, you could invent a leaf fence. Course it might have to be fairly tall eh, but...

Our leaves seem to be hanging on, well some have fallen, the poplars and some of the aspens. But we are having a rather protracted autumn, not summer like, well 'cept for this last week, lots a sun, but mostly just not real cold, not windy, not really much of anything. Dirt says that means we're in for it this winter, he believes in the law of averages. Hmmm. I think it is God messin' with the doom and gloomers heads, so they bounce from global warming to new ice age back to global warming, oh wait, they can just call it "climate change". Uh oh, lemme step off that soap box I nearly climbed on. Have a great day!

We have the corn stalk bales around here. Almost everyone does them. They sell them for bedding (or for food - sigh). A neighbor feeds his cattle the cornstalks but also feeds hay, so they have more nutrition than just corn stalks. I keep thinking we should get some for chicken bedding but Norm says they are too messy and don't break down easily.

That's interesting about the corn and kidney bean vines. The flea market sounds like a lot of fun. Good deal on the old photos. I hope you two will have a very nice weekend.