It was a lovely day yesterday here in Minnesota..almost too warm as the temperatures hovered in the high seventies. 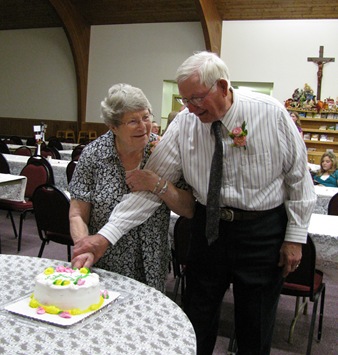 After my parents cut their small cake the gathering began.  There was no formal program..one of their friends sang a beautiful anniversary song for them.

It is a good thing my baby brother was not in charge of the menu..he asked where the red and green Lutheran Jello was? 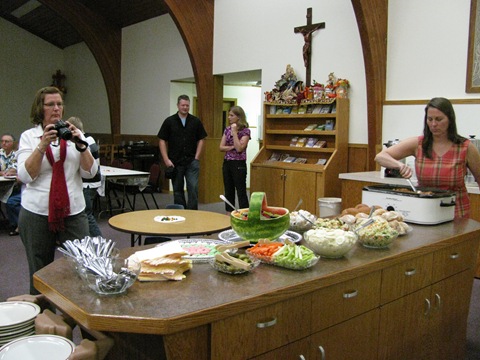 We served fruit in a basket that was carved by my son on law Handy Andy..he is in the black shirt in this photo..he is talking to Missy..she is married to my nephew ( they live next door to us).  My sister is stirring, and my sister in law from Oregon is the paparazzi. Anyway on with the food..pickles, fresh fruit, carrots and celery, a couple of different salads that my Aunt made, fabulous potato salad, buns and pulled pork in Sweet Baby Rays BBQ sauce.  Decent fare for a Sunday Afternoon Snack! 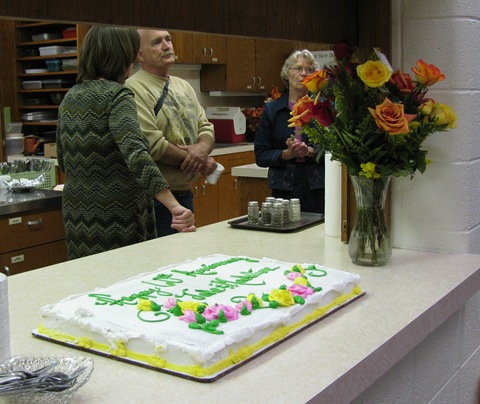 There was cake..two of these..each one serving one hundred..so I would guess that since we had only four slices left over..that we served just about two hundred people.

Food is hard to judge…but apparently no one went away hungry. 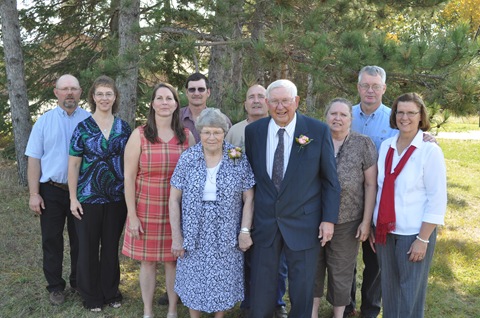 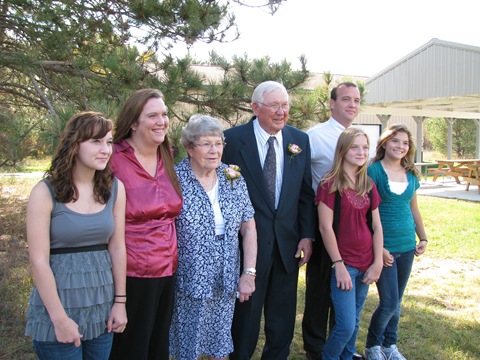 Our oldest daughter Trica and her husband with their girls. We were very thankful that Trica could join us after spending most of last week in the hospital. 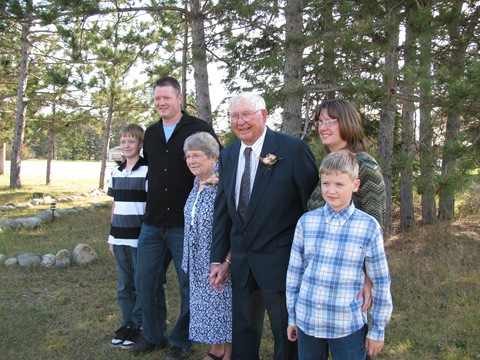 Our youngest daughter Jennifer, her husband and the boys.

Thank you to everyone who pitched in to help make the day a success, especially Jen and Far Guy who have been my “rocks” throughout the past week.  I am tired today..I will probably take a nap later:)

It looks like your parents really enjoyed their special day. Thanks for sharing these family photos. I am so happy that Trica could be there. Hope you get rested up today Connie.

It is always good when a family can gather for a happy occasion.

Congratulations to your parents.

Looks like you all had a great day ! Wonderful pics, nice looking family ! Have a great day!

What a lovely party, and I notice that your parents are always close to each other and touching. Their relationship such a loving one.
So glad that Trica could be there. Lovely table and cakes. Great party!

What no red and green Lutheran jello! I'm shocked what sort of Minnesota party was this?

It all looks lovely, the people look happy, but mostly your mom looks radiant and your dad is just a hunny of a fellow.

I must admit, I was shocked (for reals not like the jello shock) that you are the short one in the family. You seem so tall here. And you are the oldest after all. What's up with that? Have a good long nap.

I'm the oldest of six, and there's twenty years between me and my youngest sister! So I've got you beat by four years, Connie. It looks like it was just the best gathering, even without the Lutheran jello (which I know nothing about). And yes, it's great that Trica was able to be there, and looking radiant, too!

Oh sweetie, you parents are just the cutest couple! You can see in their eyes how very special ya'll made this day for them. I just knew it would turn out fantastic! What a memory you've made with this celebration of love!

God bless ya and have yourself a marvelous Monday...now go get some rest!!! :o)

I am addicted to cake so I had to view those two first, but you have a great looking family. It is so nice everyone could make it and the Tricia is better. I remember doing my mom and dad's 50th on a very cold day in December quite a few years ago. Not everyone made it as family structures were fracturing and the weather kept a lot of my parents friends at home because of the weather. You deserve a week off for this one. It looked like a well planned occasion and fun for your parents too.

What a wonderful celebration to honor your parents.

You have a very beautiful family, you can see the love in the pictures.

Oh it is so nice to see the pictures! What a wonderful day and beautiful family--even if I still can't believe there was no jello! ROFL!

You did good! It was a great day and a great gathering for your Mom and Dad. jo

What wonderful shots of your parents and family. So glad to see Tricia up and about.

You are welcome and thanks for using the photo that covers up my fat! Ugh, mother why didn't you say... Jen you are looking a little plump why don't you change into something more flattering? UGH, don't call later I will be on the treadmill.

LOL, we are laughing at Jen's comment! Honestly, if you had told her she was looking plump and needed to change clothes, would she have thanked you? My daughter would never speak to me again! LOL. Please tell Jen that I thought she looked great!

Your party turned out beautiful and it was so fun for us to get to see the family pictures. You deserve a good long rest now. Enjoy!

it always feels good when you see that a couple has a long term marriage. great day, great family pic. rose

That's a lot of cake! The pictures show your mom and dad smiling and enjoying their anniversary party. What a wonderful occasion.

Nice to see your family photos. The weather certainly cooperated, didn't it!

Love the beautiful pictures of such a special day!!

60 years...great accomplishment! Congratulations to your Mom and Dad. My Dad was married 65 years but it took two wives.

Glad everything turned out great. 60 years that is awesome. Thanks for sharing.
I bet you are just spent with everything that has been going on lately. Maybe a day of doing nothing !?
The food all sounds so good.

And you are the glue to the whole group, aren't you Connie!!

60 years of happiness! Wonderful! And your daughter there smiling and standing and beautful!

so wonderful to have that anniversary and share it.

Thanks for telling about the special day Aunt Connie! Wish I could have been there to see it myself. Beautiful Pictures.