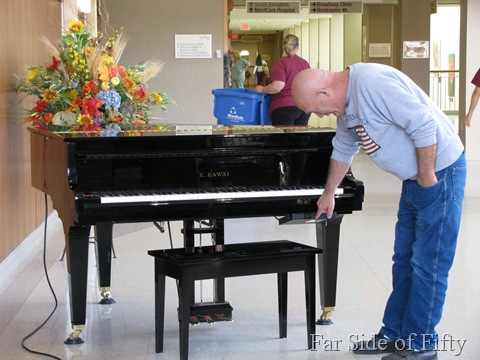 I wonder why they have a Piano in the hospital?  Far Guy was pushing the buttons.. 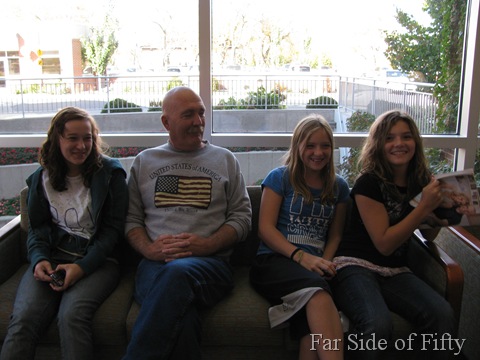 He was also entertaining the “squirrels”..his affectionate nickname for the Grandgirls. 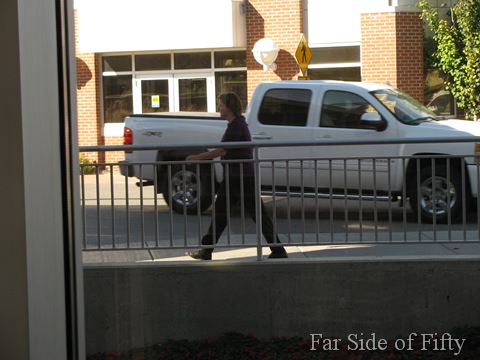 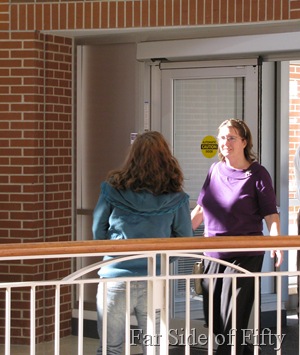 Nothing better than meeting your favorite Aunt at the door and getting a hug..I missed that photo..but you get the idea.

Jen took over for us and we came home, waiting tires you out. She is younger..she is a better waiter( NOT).  We waited at home Thursday..waiting for the phone to ring..waiting for answers that did not materialize.

We have no complete diagnosis ....we still have more questions than answers.  Far Guy and Richard who are the “fixers” have nothing to fix..because they don’t know what is wrong..or what WAS wrong.   Jen and I the “planners” have no plan because we have no idea what direction to go in. Therefore the fixers get angry and frustrated and the planners throw their hands in the air and sigh heavily.

We had hoped that with the transfer to a larger facility we would get some answers.  Trica is feeling better, she looks better, for that we are thankful. The Cardiologist said “ I don’t think you had a heart attack.”  YET he has no idea why her troponin level was way up and no idea why her EKG changed or why she was unconscious for 22-30 hours earlier in the week, and neither do her other Doctors.

They are going to release her from the hospital this morning.

I don’t think it is a good idea to let her out…the Mommy in me..says “Whoa”..what are we missing..what was overlooked. What is going to happen to her before someone figures it out..she is lucky to be alive..she is lucky not to have brain damage..but not lucky enough to find a Doctor that is worth a hill of beans:(

ooh that is a hard one. Having been a nurse I don't mind hospitals and am fairly comfortable in them, but I know folks that don't care to be there and are glad to be out of them.

Not knowing, not being able to fix or plan, sucky. Super sucky. It is amazing how far we have come in medicine and then again how much we don't or can't know. Silver lining? At least they didn't guess or make something up!

Your girls look so sweet with their grandpa! They are very blessed girls indeed, to have capable grandparents and family.

Have a good day today in spite of uncertainty and enjoy your folks' party tomorrow!

Waiting any where is very hard for me, So how is all? Hugs your friend, Barbara

I hear your frustations and they are understandable. It sucks waiting and still no answers. I hope they figure this out before she gets sick again. Prayers for Trica.

Released already? I would be a nervous Nellie about that.

Continued prayers for the patient, the planners, and the fixers.

Oh! My! Gosh! I also would be more than nervous! Next to frightened! I will continue my prayers.

Just getting up to date on your situation...How awful...and the not knowing is the worst...doctors play their guessing games with our lives...will light a candle and say a prayer for you all...

Keeping you all in my prayers and hoping you get some answers.

You need copies of everything and maybe a trip to Rochester, MN. If any of her tests are available to be burned on a CD, so much the better.

Good luck, and I hope she has some answers soon.

And maybe a sleep study.

I hope all goes well and you find out your answers soon ! Yes sleep study sounds good ! Hubby was suffering from all kinds of weird things suddenly last year until he had the sleep study and found he has sleep apnea it can lead to all kinds of dangerouse health problems ! He is on a machine every night for it and he is 100% healthy again !

Thanks for the update. I too wish they would keep Trica in the hospital a little longer but these days things are almost "drive by". Loved the pictures of Far Guy and girls and also the Cavalry arriving. You have a strong family and that is so great. Pleae keep us posted on how things are going and good wishes for the anniversary gathering. Maybe Tric can make that?

Hang in there. For me being at home is SO much easier than waiting in a hospital. Hope things get better and she finds a doctor worth his salt.

Waiting is not fun period. I'm reading fast on my lunch break so I may have missed it, but I'm wondering how your daughter is feeling about going home. Hopefully, she can go home where she'll be more comfortable and feel less poked and prodded. Then maybe they'll refer her to a doctor at the Mayo that will find the answers you're all looking for.

Sorry, I haven't been by to give you my prayers, and let you know that I am still thinking of you and yours!

I am impressed that you found someone who would admit to not knowing the answer. Often pride won't allow anyone to say that. If they let Tricia go home, have they thought about sending her home with a monitor of some sort - - - like they do with preemies?
Your family sure is getting to see a lot of each other this week, aren't they?

Waiting and not know is so very hard! Please keep pushing for answers. Sadly I have learned the hard way sometimes you have to be a..............at hospitals!!

Hmmm. That is a tough one. I guess they are sending her home because they are as puzzled as anyone. And if her blood work has returned to normal, they are probably hoping that everything will turn out all right. That is scary, Connie. I don't know what I would be wishing for right now if I were you... other than a diagnosis, which doesn't seem to be coming.

So glad to hear she is coming home. Sure would have been nice for her to find out why.

It's just a little concerning that she is being sent home without a diagnosis.

I spent the better part of the last ten days in the hospital in Brownsville, Tx. with my Daddy before he passed Wed. night. Not my favorite place to be but we practically lived in the hospital when our Social Butterfly was undergoin' her cardiac surgeries.

Waiting??? I sure don't wait well...I'm one chick who wants everything yesterday.

God bless ya and have yourself a marvelous weekend!!!

Oh, my, I can feel the frustration!

You and your family are in my thoughts and prayers.

I know waiting is no fun. As the second nurse to make a comment, I echo her thoughts about how much we still don't know, how much we never CAN know about the mysteries of the body. Since it seems to have been heart related, are they sending her home on a Holter monitor? If it was an arrythmia, maybe they could catch it that way. Best wishes and more prayers, coming your way from the east coast.

Sorry to hear they had no answers. I don't know why, but I was afraid of that. I know how frustrating not knowing can be, but at least they didn't pretend to know. As others have mentioned--Mayo--did they mention Mayo Clinic? I know a couple of people who finally got answers there.

Love the photos! This is when family really counts, isn't it? You have a wonderful family. You're all in my prayers.

This must have been a stressful time for you and Far Guy and the rest of the family. I hope there are some answers for all of you and that Trica really is well. What does she say?