Today we learned that our thirty –eight year old daughter Trica had a Heart Attack.  This morning she woke up and began to struggle with being intubeated..she finally got the nurses to understand that she needed something to write with..she wanted to know what happened and where she was.  Later the tubes were taken out..and she had to stay awake all day long.  Through blood tests and changes in the EKG is was decided that she had a clot that caused a heart attack.  They did more tests to RULE OUT a Pulmonary Embolism and a Stroke..and to our relief they were ruled out. (Thank you God!)

When she saw me today she said “Mom what happened?”  She was awake at 2 AM and spoke to Savannah and her friend because they were being a little giggly and loud..she returned to bed.  Maddie checked on her at 8:30 when she got up and she was sleeping..but at 10:30 when Savannah tried to wake her up ..she couldn’t get a response and her breathing was shallow. I had the girls holler at her, slap her cheeks and put cold wash cloths on her face..nothing would arouse her. I told them to watch her breathing..and to make sure she didn’t stop breathing..and that one of them should stay on the phone with me..and if we got cut off for some reason they were to call me right back..one was to call 911 and tell them that their Mother was unconscious..and the other was to try calling their Dad. I was confident enough in their capabilities and in mine to stay calm. I could instruct them how to open the airway and begin rescue breathing if necessary.  I don’t know exactly what happened..but sometime while she was asleep she had a heart attack.

We are going back up early in the morning to speak with her Doctor to see what they are going to do next.  We came back home after everyone was settled for the evening. We like to sleep in our own beds. 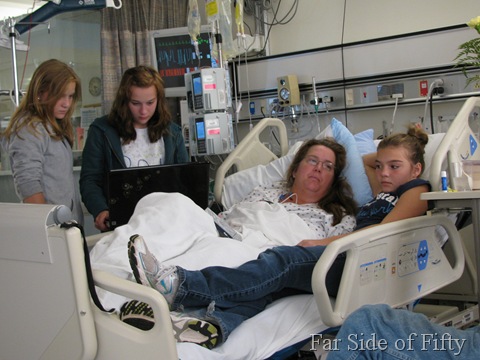 Paige, Savannah, Trica and Maddie this afternoon.
Thank you for your kind comments and prayers, this afternoon Maddie read them all to her Mother..it means more than you can know to have support during this trying time.  Trish (her real name is spelled Trica..I was in a severe hormone depression when I named her and spelled it funny! )anyway Trish or Sis as we call her..said “See girls, there were even people we don’t know praying for us.  Your grandma has lots of good blogging friends!” :)
Posted by Far Side of Fifty at 10:53 PM

So glad to hear she is doing better. What a shock. Medicines for hearts are miracles nowadays - thank goodness!

Trica and family - we are praying that your health improves and that you get answers.... you have a great group of girls there!

What better medicine is there than these darling girls? I am glad that Trica is there in the hospital where the doctors can start treatment. Yes, thank heaven that there was no blood clot to wander around and cause damage.
We all are pulling for you, Trica. Rest up and get stablized so tht you can get back home. We all will be watching for updates on your progress.

I am continuing to pray and you and your entire family are in my heart. I love you all dearly.

Thank God there weren't any blood clots. I will continue to pray for Trica's speedy recovery and your entire family. Thanks for the update. those are some smart granddaughters you have.

Glad to hear your daughter is better and getting the care she needs. We will continue to pray for her. Thank you for the update.

So glad there are no blood clots. What awesome young girls. Trica I'm praying for you. Your just so young. Praying for all of you. Thank you Connie for keeping us updated. Such a hard thing to go through.

And I too am so happy to find out that she is conscious and aware. This was a big scare, but hopefully they will find out what happened to cause it and will treat it before it gets worse. She is so young! And I also will continue to pray for her full recovery.

Glad to know she is better....

Glad to hear you are feeling better and awake. My prayers are with you all....I love that photo yesterday....it feels like yesterday that the pict was taken...and we would run around and play in the trailer house! Love you all!

Praise the Lord! How wonderful that Trica is on the road to recovery.

Oh, Connie, how scary! The looks on those girls faces says it all. Praise God they kept calm and were able to get her help, and you too! Praying for you all, keep us posted. Sending hugs to EVERYONE!

Timing was everything for her. Thank God the girls checked on her when they did.

Dear Connie and Mr. Connie :-).....
So thankful that Trica is in good hands at the hospital. Hoping she will find out exactly why this happened. And if she is anything like "MOM".......she will ask questions FIRST, before any and all treatments, X-rays, and medication. I've sort of been in her shoes.....earlier this year.....and I was scared beyond words. I had severe pneumonia.....and
am doing well now.
Stay confident...Bless all of you, especially your adorable granddaughters! They are destined for bigger things, as they have shown such maturity and inteligence in a desparate situation. This is Liz in N.W. PA

I'm happy to hear she is recovering nicely.
What a scare !
Those daughters will give her all the attention she will need to get through this rough patch, you can see in there eyes they are glad their mom is still with them.
God Bless I will say a prayer for her and her family for a complete recovery.
Jo

Thanks for update, and yes, blogger friends and prayer will help you and her get through this. Prayers for continued healing. jo

Praise God and kisses and hugs, kisses and hugs. Great news!!? Not great that she had a heart attack and had to go through all that but great that now they know what it was and she is awake and looking really good, really good by the way. I'll be prayin' that they figure out all that is going on and getter fixed, fixed up quick and permanent like.

prayers work wonders,I know,I have been where your daughter is now,5 years ago,may God watch over her.

So happy to hear of the inprovements and Praying they continue. God be will Trica and all. Gw

My prayers are with you.

Oh! Gosh, Connie! How terribly frightening! You all have my prayers!!!

Besy wishes for a speedy recovery, Trica! it looks like those girls will care for you, and with their support, you will soon be up and about!

Oh my, Tricia is in my prayers as are you and your entire family Connie.

She is tooo young for a heart attack. Praise God that she is going to be okay. The girls are BEAUTIFUL! We will continue to pray because she still has her road of recovery to travel.

Good wishes and good care all will be well.

So glad they found out what happened and she is doing better. She is so young for a heart attack,but it looks like she has some very capable nurses there.
Continuing to pray.
Marilyn

I can't even imagine what you're going through. Praying for the doctors to have wisdom and that your daughter is fully recovered soon.

Soooo glad to hear she is doing well. What a frightening thing for her and the girls and everybody. Relieved that she is awake and talking and feeling okay. Her angels were watching over her, that's for sure! Prayers and hugs.

Omg I didn't know! I am so sorry to hear this!! Praying for your daughter!!She is the same age as mine, so I know how scared you must have been!!

sorry about the illness and i would be concerned many prayers. rose