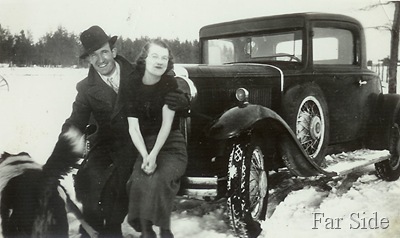 Far Guys parents..Marvin and Evelyn.  This may have been taken the winter before they were marred ..or the winter after.  I believe the car is an Overland but I am not sure of the year.  Far Guys Dad always did like dogs ..his hand is reaching down to stop the two dogs from scuffling or jumping up on him.  I wish I knew where this photo was taken..I will guess that since Evelyn is not wearing a coat that it was taken at her home place. 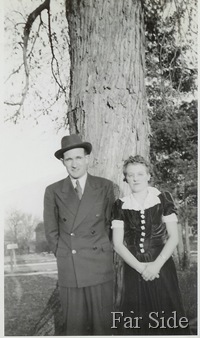 Here is the happy couple on October 26, 1940. I believe that this is their wedding photo. Evelyn kept a dark velvety dress in her cedar chest for years. I wonder what happened to it?  Perhaps Far Guy’s sister has it. 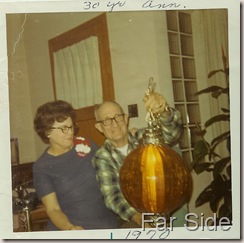 This is their 30th Anniversary in 1970.  This swanky lamp hung in their living room for years and then in their apartment. It was a anniversary gift from Far Guy and his sister.  It now hangs in our daughter Jennifer's new old house in Fisher, Minnesota. 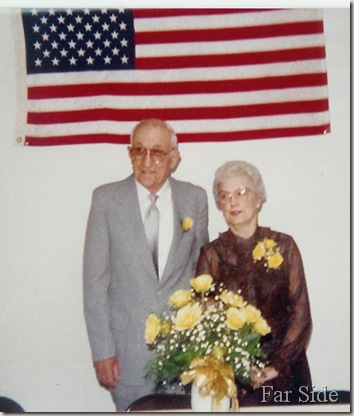 They celebrated their Fiftieth wedding Anniversary in 1990, and would spend almost another four years together before Marvin would leave her all alone. 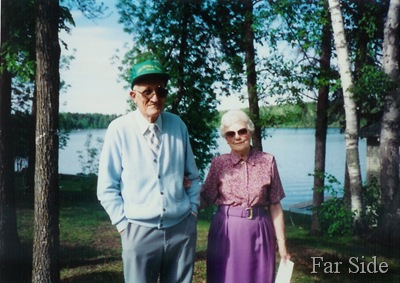 This was taken at our resort sometime during June or July of 1994..It is one of the last photos that I have of them together. That was sixteen years ago..hardly seems like that long ago..but time marches on:)

What a perfectly precious couple the made through the years! I loved seein' the progression on this lovely couple and hearin' their story.

Precious photos of them. That first photo is really something!

This is a beautiful couple and I like the photos.

I am at that time in life I get weepy when I see or think about the lifes gone with the past of the people we loved. Love the memorys.
Patsy

Remember when men wore hats? And women did, too. I love that first picture, it's so reminiscent of times gone by. They were blessed with all those years together! Thanks for the wonderful pictures, Connie.

I'm always amazed at the plethora of photos you have, and the stories you can tell with them. The story of a long love, always a beautiful thing. Thanks Connie. :)

I'm so emotional today -- couldn't stop a tear or two.

I love looking a old pictures!! Their love continues on!!

It is such a nice sequence. Time does keep flying by and where did it go?