Sometimes when we are out and about.  Far Guy will ask Far Side “Have you ever been on that road?”  If she says “No” most of the time we get to go..being the adventurers we are. On Sunday Far Side said “Follow those Public Access signs..see where it leads, maybe we can walk Chance there.”  Well that brings me up and at’em and out of my slumber in the back seat. Walk and Chance in the same sentence means I am going to get out of the car! I usually sleep in between cows and horses.  If I am really dozing on the job..someone usually hollers “Horse” or “Cow.”

Ten miles later following the little brown Public Access signs we arrived.  It was not quite a two track road toward the end. 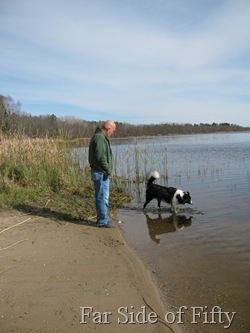 We wondered what lake we found.  Far Side said “It looks more like a river than a lake.”  You would think that they would put up a sign..you know the ones with a red X..you are here. 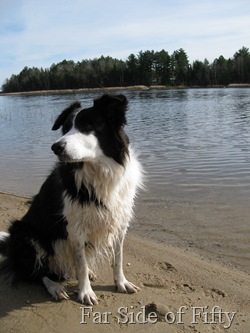 The options were Blueberry and Shipman..they kinda knew where they were. But they had never been there before. We consulted with Cousin Chuck..he said we must have been at Little Blueberry…he used to work for the DNR and knows the name of every lake in the area! 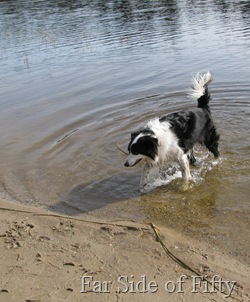 The water was cold..and neither of them ventured in with me. Far Guy found a stick to throw..a stick..I don’t “do” sticks…I was a bit of a grump about that stick. I retrieved it a couple of times..then Far Guy did the unthinkable… 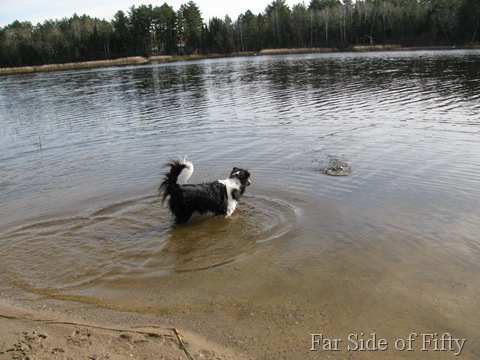 He threw it in the deeper water where I would have to swim.  I can swim..but only with Far Side and she was not swimming that day.  She finally said “Enough already.”  I guess barking at sticks does no good..all the dogs across the lake began to bark. It was like a symphony:)

Wet dog back in the vehicle...how aromatic...

How smart of you to realize that barking at sticks doesn't do any good. Martin needs to know that but then that is why he is only of the second smartest breed of dog and why Bet wants a new Border Collie as soon as we ship the extra Ratter up north to Anna. What a bunch of lakes you live around, and big ones too!

Heeehehee! "Barkin' at sticks does no good", Chance your one funny bloggin' dog. I bet there's sure not many of you out there.

Too bad Far Side was a party pooper and wound go in the water! I'm bettin' the water was r-e-a-l-l-y cold.

Have a great day chasin' squirrels, barkin' at wild sticks and enjoyin' the company of your wonderful owners!!!

Funny - barking at sticks. Oh Chance is such a sweetie. You should have gone swimming with Chance.

I don't do deep water any more either, Chance. And I don't do sticks. I love rocks though and bark and whine and dance until Mom throws in at least 20 rocks for me to try to get.

Our dog Miggy does the same with everything , we say shes barking at it as if to say( ok, well anyone gona get that for me ) Great photos ! Chance is a cutie !

Oh Chance you are so funny! Barking at the stick doesn't help, does it? That looked like a great little beach to play on. Looks like it was fun :)

You are too cute, now why do they call it Blueberry Lake?

My master says he heard of Blueberry Lake but not Little. Can't quite pin it down, he says. I bet the water is cold "up north" now. I do deep water but cold...not so much. He tells me that why I can't go trout fishing with him...but I have my doubts that's the real reason.
take care now,
Baron the GSD

The water was so very beautiful and clear! Tell the Fars to carry a thermometer and tell us the temperature of the water. I love that they always find water for you to play in. I am glad you did not venture out over your head.

Chance, I hope that water wasn't too cold! What was he thinking throwing that stick in the water ;)

That last picture is wonderful! I'll have to get Oscar to teach you how to swim out to really deep water - and cold too, his favourite! - to retrieve sticks.

I love those journeys down unknown roads and what a treasure you found. You made me smile about the cold water and your most amazing dogs. My dogs won't put a paw in water any longer due to the temperature. I enjoyed your photos.