Just a reminder..next week when we go off of daylight savings time is when your smoke detector batteries should be replaced.  So put batteries on your list..ours take the little square ones..so that is what it says on my grocery list  “Little square batteries for the smoke alarms.”  I don’t care if the old batteries still work..in six months they probably won’t.  There is a time to be frugal ..and this is not one of them.

The big wind got one of the trees in our nephews yard next door. No one was injured..but I bet Bailey barked up a storm! 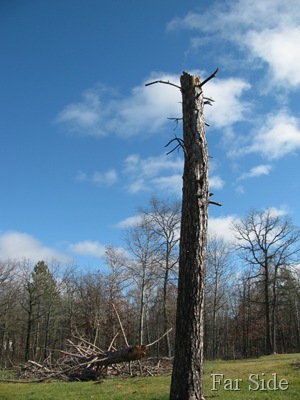 Snapped off half way up the trunk.  That seemed to be the story with many of the trees that fell during the big wind storm. This was probably one of the reasons that Chance wanted company outdoors during the wind storm..he is a dog and mistakenly thinks there is safety in numbers, either that or he is afraid to die alone.  We were prepared to lose electricity, luckily we didn’t although the lights flickered.  I put extra water in the fridge..so Chance would have water just in case we were without electricity a long time.

This morning it is frosty.. 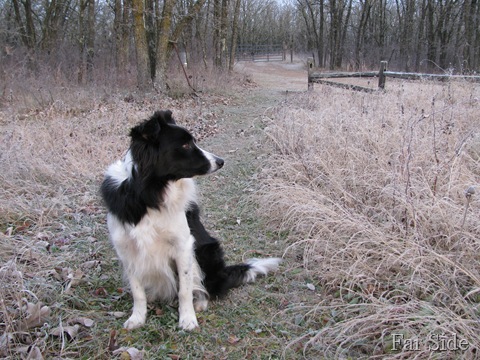 Chance and I were out for an early walk.  I call this the brown time of year..it is like we are stuck between the green and the white..yup stuck on brown.  Stupid deer keep knocking the top rail of the fence down..there is a huge buck in here..Chance and I saw him..he is about an 8 to 10 pointer and is massive. He still had the velvet on his antlers..If I would have had the camera out of its case and turned on while I was driving into the yard I would have gotten a photo…but alas I was not prepared.

Now go put those batteries on your grocery list:)

Labels: Just Me being Me, yes I am a bit bitchy about those batteries

Chanch is so smart, to me winter has no color unless it snows. Did you see the guy I found in Texas? lol

Just in case anyone wants to know brown is NOT my favorite color!!! Just sayin....

I'm so glad ya'll kept power durin' those nasty high winds. Not everyone was so lucky. My daughter, Social Butterfly lives within her city limits and she said that was the hardest thing to learn. That she did not have to save water during the retched Ozark ice storms.

I always keep some on hand, out here we just really can't always count on power!!!

God bless and have a great weekend!!! :o)

Chance is gorgeous, and thanks for the battery reminder. I take my used batteries to the public library which has a bin where you place them and they are disposed of correctly. Don't throw the batteries in the garbage, I understand.

Last weekend I got distracted while cooking sausage and walked away - totally forgetting I was cooking! Of course I remembered when the house filled with smoke. Neither of our smoke alarms went off. And both of them had fresh batteries. We promptly replaced them and their batteries with brand new ones.

Chance looks wonderful. I wish I could give him a big hug!

Okay, it's on my list! Thanks for keeping me safe, reminded me of a very important task. And yes, Chance is so handsome...

Great idea. I don't like the changing time, leave it one way or the other. Someone has to work in the dark anyway.

Chance shines like a jewel in that photo...funny that black and white would be the brightest color.

I love it when it is frosty - everything looks so much more interesting...

I think I will put new smoke detectors on the list. Thanks for the reminder. I did get my upstairs air conditioner taken out. The wind was blowing through that like a giant open window. I got the dog brushed last night and I need to hit it again in a couple of days. He changed in size with all the hair I brushed out.

The other night I couldn't go to sleep, it was in the middle of our FIRST STORM OF THE SEASON sorry I don't usually type in all caps but that is how the media was portraying it (politics must not be all that fun any more for them). Any way I got all the way out into the middle of the pasture past all the big trees just to remember we were in the middle of a storm. Our storms come in gust-quiet-gust form, I walked out at the end of a quiet part, now the gust was a comin' Yikes. The horses would only walk me back part way, they do not care to die together!

Here's something to do with your nine volt batteries that aren't dead yet but get replaced. Keep them on your bed table and when you feel that funny tickle like a cold is coming on, put the buttons of the battery on your tongue. Yep. Just try it. Dirt swears by it. When he was the sound man for our old church he would test the cordless-mic batteries all the time (nine volts and if they went dead in the middle of a sermon, well you can see it would be very groovy) Any way in those three some years he never, and I do mean never, had a cold. And trust me at that same time everyone was coming up and talking real close to him. Everybody has something to say to the sound guy at church!