It had to happen.  Sooner or later it was bound to snow. I slept in.. much of it had melted before I was awake for the entire day.  This was our yard yesterday October 27, 2010. 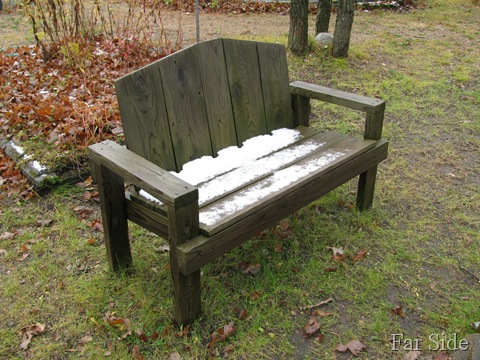 The wind had howled like a banshee on a rampage. Even back here in the woods it was windy. Sticks were falling out of the trees and they were swaying back and forth so much that Chance refused to go outdoors by himself. 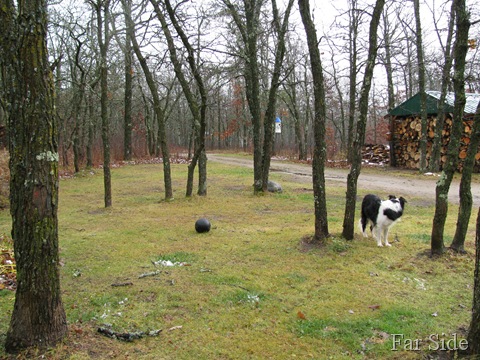 We will have to have one last round up of all Chance balls in the yard before winter sets in.  This time of year Indian Summer can always return… I am hopeful. 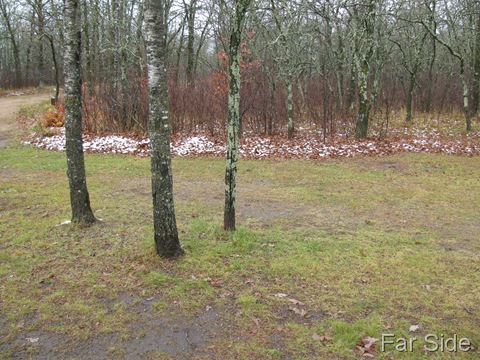 There were many leaf skirmishes, they were chopped, they were blown and they were raked.  Now they are collecting snow at the edge of the woods. As long as they stay away from the front door.  Chance did his share to help..he herds the rake..and his big old fluffy tail did an excellent job of carrying many leaves into the house. The arrival of snow signals the end of the leaf battle..even if you are not done. But I am done..and I am once again victorious over the miserable leaves. Far Guy doesn’t rake..but he does use the leaf blower and he does chop them up with the mulching blade on the lawn mower.  In some spots the leaves were knee deep..it is the price we pay for deep shade during the summer.  We also don’t have great looking grass..as in well manicured thick and luscious..it is what it is.

All of the summer lawn ornaments are put away..the patio furniture was put away dry..and my garage has been cleaned. The patio table remains like one lone wish that it would be warm enough to sit and relax around it one last time before the patio is filled with snow drifts. I guess I must be a dreamer:)

Snow Already!! We haven't been that lucky yet...

Wonderful post and photos ! We are having the high winds as well, I posted it on my blog about it.
Our Miggy does the same thing , drags the leaves in on her big poofy tail what we call the shaggy fur on her backend on each side her nickerbockers lol . Miggy becomes a nervous nelly with high winds and also doesnt like to go out by herself in high winds ! Funny arent they ! Have a great day !

Oh I have so very much to do!!! Last week we had weather in the 80's but tonight baby their sayin' 28. My pool is beggin' to be closed....did I say I hang on to summer with passion and optimism??? Heeehehehe!!!

God bless ya and have a glorious day!!!

I'm a leaf chopper myself :o)

It looks like your snow actually stuck. Ours just melted as it hit the ground. That wind was really something! I did have my leaves cleaned up but there's quite a new accumulation. I think you just put together my "To Do" list for me -- put away lawn furniture, empty pots and put away, and clean up newly fallen leaves. Ugh!

I haven't raked a single leaf. I did sweep them from my porch. Buddy collects lots of leaves with his tail too. We are finally having another cool spell come down. After near 90 yesterday temps are dropping all day down to mid 40's tonight. Air conditioner yesterday and heater tonight. It's crazy.

Your yard and lawn sound like ours. It is definitely worth it for the shade though. Reading your post makes me cold just thinking about your weather around the corner.

We don't usually get a lot of snow, but it is a 'La Nina' year for us, which means there is a good chance of it being colder with more snow than normal. Not really looking forward to that. Love to see the snow come, but once the novelty is over after a day or two, I can't wait for it to go!

Who needs a well manicured lawn anyway??? I just want to ride my horse across it :)

I love your imagery at the end there...I'm a dreamer too. Around here, my garden journal shows many years when our first frost is right around November 4. We haven't had one yet, and no snow....if we get some it's usually in January anyway. It is 77 outside now, but humid...I had just gotten used to the crisp, low humidity of the fall and this change is making my lungs regret it! For whatever reason, I do love to see the snow...it is beautiful!!

It looks like Far Guy is ready with the fire wood. We are going down in the 30's tonight.
Patsy

I think I can hear my nephew complaining from here!!! I know you and my nephew dreaded this day. Yesterday's rains here have just about knocked all of our leaves out of the trees. Hope you have a good night.

Snow is a four letter word! I am not ready, we are still gardening but I fear tonight it will dip to freezing.

Thank you for stopping by because it gave me a chance to meet your blog.

Snow? Wow! Seems early for that but we are supposed to get our first frost soon. I love Chance. What a beautiful dog!

Drop by my blog anytime. Tea and coffee are always available. ;-)

I have been catching up on my reading and remembering why I started following you in the first place. Wonderful!

Please stop by sometime. I have a little something for you. :-)

Ah, the first snow... a reminder to put the summer furniture away. Our snow has melted and it's now very mild with plus temperatures again! I'm still battling the leaves!

we haven't even started the raking.
there IS snow in the foothills, too.

Yes, this is the week for me to bring a few things in at a time. The normal routine is to do it in the first snowstorm and that is not fun.