October 26: My Other Baby Brother

This date in history is kinda important to me. It is the day that my other baby brother entered the world in 1960 when I was nine.  I honed my babysitting skills on him.  He had no choice..he was stuck with me.  He was a pill. When he was six months old he refused a bottle. Mom had been breast feeding him..but he got some teeth (ouch). He was a biter.  He had a cup..which is fine..except at bedtime…then someone (usually me) would stand in the dark at the crib and pat his back or gently shake the mattress beneath him to lull him to sleep. Most nights I would even sing or tell  him stories.. His breathing would change and he would relax and fall asleep..then you had to wait, right there in the dark..first you would stop the patting or shaking..but stand at the crib poised to continue if he stirred..if all went well you could slowly sneak out of the room..sometimes you didn’t make it half way to the door before he was sitting up and screaming. This took at least twenty minutes every night..sometimes longer. 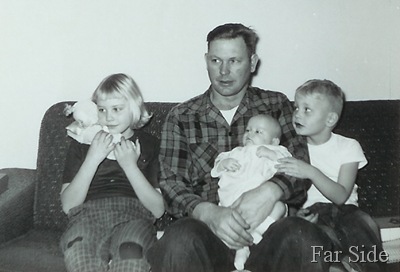 December 1960 we are all watching TV..it was our first TV!! Me age 9, my Dad holding my 2 month old other baby brother, and my baby brother age 6.

As he grew older he was my shadow and I kept him out of trouble and danger…except the time he fell on the metal fire truck…that was my fault..I was not keeping a close enough eye on him. He has quite a scar on his arm. 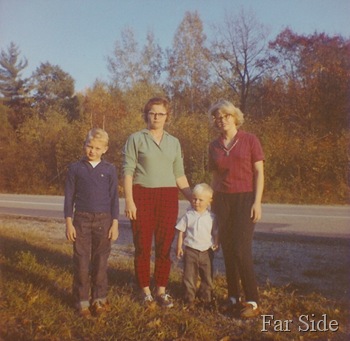 1963: My baby brother age 9, my Mom, my three year old other baby brother and me age 12 sporting some stirrup stretch pants and beautiful jewelry.

My other baby brother was a nonstop talker, and still is....when he was little he chattered non stop..why this? why that? ..he was always curious about the world around him. He would talk to anyone who would listen to him, old and young alike. 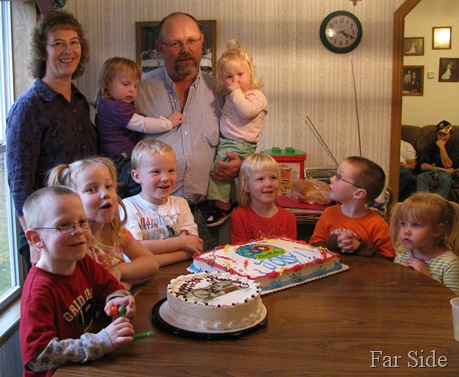 My other baby brother and his wife “she who sees robins first” and all of their grands. Last Sunday they invited us over for lunch and cake to celebrate!  Happy Birthday Jody! :)

What great photos Connie. I had forgotten all about stirrup pants. I was thin as a rail back then and they would nearly pull down when I moved!!!!!!!!!!!!!
Hope your brother has a great day.

I had the responsibilly of my baby brother when he came along I was nine years old and baby brother is now 62.
Happy Birthday Jody!
Patsy

Happy Birthday Other Baby Brother Jody! The pictures were great. Your Dad's shirt is still in style :)

My one and only sibling was also born in 1960. She was like havin' a real live doll to play with....'till I started dating! Heeehehehe!

Happy birthday Jody. Hope ya'll had a grand time celebrating. How could ya not surrounded by all that love???

Ode to stirrup pants...I loved them.

Being the baby of the family and am older than 60 my two brothers don't know how to deal with it. I think that I scare them because I grew up and don't take any of their crap anymore. Anyway, it is cool that you have a baby brother. He looks like a great guy with oh so many grandkids.

My hubby is the baby and I mean baby, his brother and sister both have 7 years plus on him! Very handsome family!

What a lovely tribute to your brother. There is a 9-year gap between my sister and I learned about taking care of a baby from being involved with her. 9 years seems a perfect span for siblings -- when you're kids they are too young to fight with you.

Lovely post! Your brother sure is a young grandfather.

You were as tall as your mum when you were twelve! Amazing.

What great pictures and Happy Birthday Jody. You were a good baby sitter!

My 'baby' sister turned 50 this year too:)
Baby brother IS a young looking grandpa, with a lot of grand kids:) Sis and I don't have any of those yet, and don't see any on the near horizon.

all my siblings were older -- so I was the one that they tell the baby sister stories about.

I really like the photo of the birthday party! Eight grandkids, what a blessing!