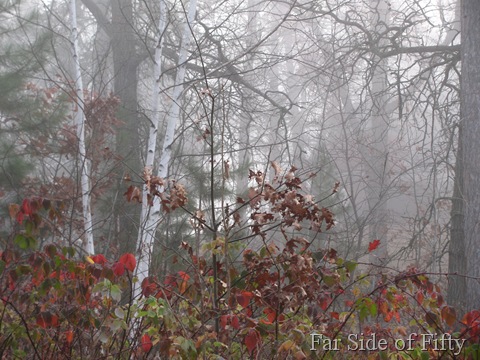 This morning when Chance and I got up there was lake fog, it was cold out.  It was 27 degrees, the water at the lake is warmer than the air and a misty fog rises out of the lake. We went for a quick ride..me in my jammies..Chance in his coat. 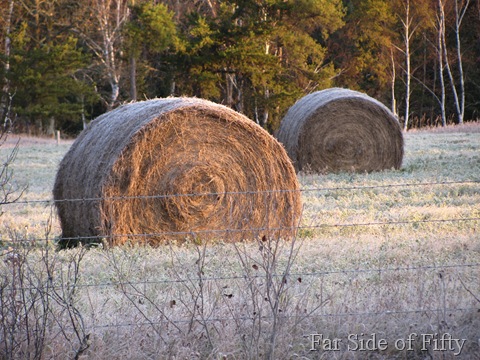 There was frost on the hay bales. It is a fine reminder that cooler weather is on it’s way.. perhaps it is here.  We have had two hard frosts this week. 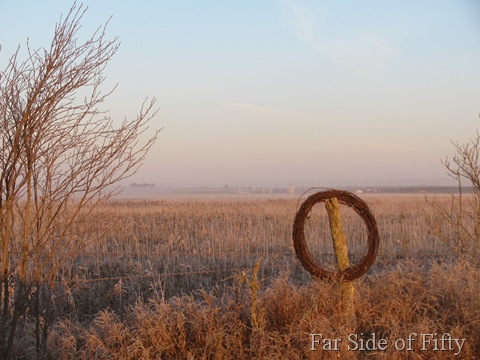 Stories and Rumors..  there are two wolves hanging around together..a neighbor three miles from us got a photo.  I also heard that several wolves attacked a dog right in town in Detroit Lakes.  My cousins dog who was tied up in his yard was taken by something and dismembered and partially buried in mud. They think it was a Mountain Lion.  They heard a rumor that someone had a pair of Mountain Lions that were rescued as cubs, they became to large to handle and too expensive to feed ..so they released them into the wild.  I am not sure what would possess people to have wild animals..other than they are cute when they are little.

There is another lost dog(Australian Shepherd) poster and reward up at the local convenience store..the little dog that was lost last spring has never been found.

We try to go out with Chance after dark..he likes the company and we feel better knowing that he has not left the yard. Some evenings..like last night all the dogs in the neighborhood take up howling..at deer or whatever else is out there:)

Love the frosty scenery! Another gal who likes to take pics in her pajamas!

Brrrrr, I'm afraid Winter is coming soon. One killing frost here, but the days have been very pleasant (60s or 70s).

I agree with you on people keeping wild animals. Here native fisheries are in jeopardy because of people releasing non-native species in the lakes and streams. With no natural predators, they thrive. Crazy, crazy people!

Great photo, yeah it was down to 48 here this morning, and we are deep Southeast. The fall is great I love all the things that come with it, including frost, yeahhhhhhhhh...Sorry about your dog, hope you find him and he gets returned safe.
Hugs my friend

Love your topper! the pictures in it are wonderful.....it's still summer here, that's OK the rice is late this year so everyone is still harvesting, but I'm still irragating....at least it in the 70s and not the 90s. You be careful with the wild life and be safe.

I'm glad you go out with Chance at night, but I'd keep a close watch on him during the day, too, if those Mountain Lions are somewhat acclimated to humans they might not be shy during the daytime. Wolves will hunt any time of day and it sounds like they have found easy pickings with the pet dogs! Shudder!!! Wouldn't want anything to happen to Chance or any other pets.

Beautiful morning shots! Worth running around in your jammies!! :):)

I love fall fog. I'd be a little concerned about wild animals too:(

What a wonderful 'foggy' pic you captured. We have waaay too many wild critters 'round the Ponderosa for my comfort.

I locked myself out of my house once in the wee hours in my jammies and Hubs was out of state.

Ya'll have a magnificently blessed weekend!!!

Beautiful photos Connie!! Brrr -looks way too cold though. So Chance wears a coat - lucky dog!! I would be afraid to drive around in my jammies. I would probably get stopped by the police and get arrested and have to go to jail.
I hate hearing about the poor dogs being attacked by wild animals. I'd be afraid to let my pet outside without supervision.

Beautiful pictures - I miss those interesting early morning shots..... love the first one... arghhh - the girls didn't return the metal decor to its spot --- it is back home!

Yes, those are some great pictures, Connie, and you are quite brave going out in freezing weather with your jammies on. Fortunately you had Chance with you, and he was properly dressed. I also love your new header, as usual it has to have a picture of Chance looking like the king of dogs that he is.

Brrr, we haven't really had a real hard frost yet! But it has gotten down in the 30's. We are getting rain right now and fog usually in the mornings. Scary to think of having wolves and mountain lions at large killing things! You keep Chance and yourselves safe. So, far the most we have to worry about are coyotes, and foxes and that is about it around my neck of the woods. Up in the Adirondacks it might be different though.

Really horrible to think about wild animals set free to harm helpless pets. Glad Chance has got you and Far Guy to watch over him. Your photos sure are pretty. I get out in the yard in my pj's because we have no neighbors close, but I would be afraid to drive - I just know I would get pulled over!!!
Thanking you both for your prayers for us.

Beautiful pictures of a very chilly morning. It is getting cooler at night here but no frost yet. Our days have been back in the 80's this week - - - seems a bit late for that but I haven't heard anyone complaining.
It hurts my heart to think of our precious pets' lives ending as prey to wild animals. I know it is what happens in nature - - but our "babies" count on us to keep them safe. I am so glad Chance has you all to watch out for him.

Love that first picture. Can't believe you got up so o o o early! Spose you heard Odda, she was howling again tonight already. Critters in the yard! lol

Great photos ! Be safe Chance ! Have a great day !

I've been wondering, do the hay bales just sit in the field looking picturesque? I mean, does someone come along and take them away into a barn or something? Will the hay bale freeze?

(I was raised in the city.)

The glistening rose colors on the haybale make me long for Armstrong. What beautiful and atmospheric shots you captured. You my dear, are on a roll!

I am glad that you go out with Chance at night. How terrifying for that poor other dog to be attacked when it was still tied up. How absolutely awful...

You photos are beautiful! But big cats turned out to be wild after raise with people ?!?! Whose ever cats those were need to be punished! They don't really know how to hunt, but they do understand hunger.

You take care of Chance dogs are easy to lure as they want so to protect their people, once out of safety they then lose. As you well know.