Hello..it’s me..the blogging Border Collie.  A few weeks ago we were gone all day long.  Far Side has not told you about the best part of that trip. So I guess it is up to me.. 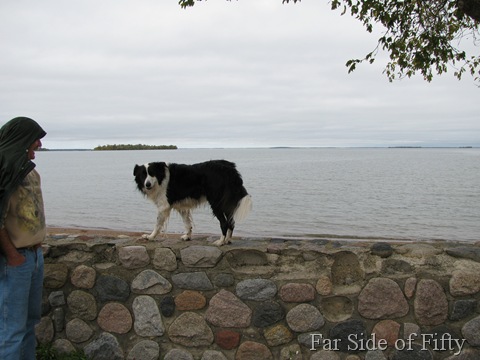 Far Side told me to jump up, so I did..then I walked on the rock ledge..perhaps I should do agility.  Far Guy has his jacket  over his head because it was windy..very windy and cool with the wind coming off the water. 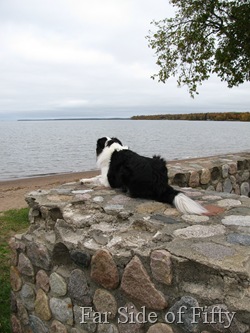 What a perfect place to watch for my ship to come in.  Look at all that water! 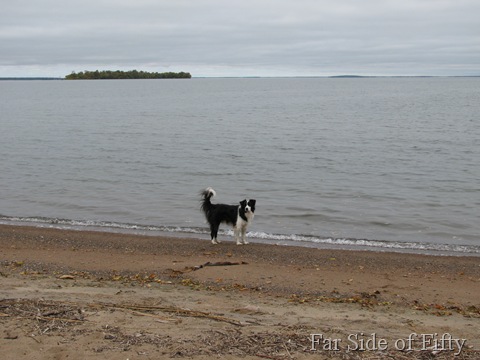 Leech Lake even has some wave action.. 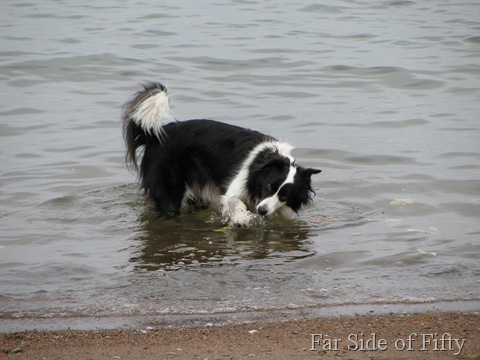 How about some Chance action?  I can’t believe it, I played in the water all by myself..no matter how many times I invited Far Guy to play by barking at him, he kept hollering at me “ Chance I am not coming to play in that water..it is freezing.” Far Side finally gave up and grabbed a really long stick and splashed some water for me..she usually doesn’t mind wading in the water at least up to her knees..she looked pretty stupid leaning way out over the water. I kept hoping she would fall in..then we could have stayed and played all day long. 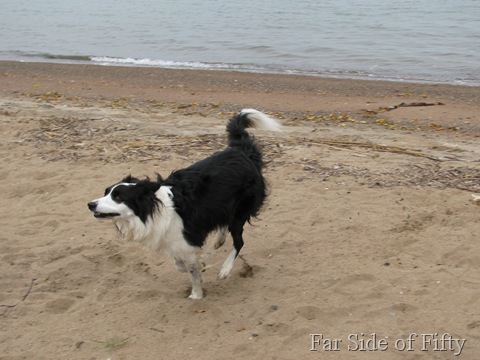 I had a blast! 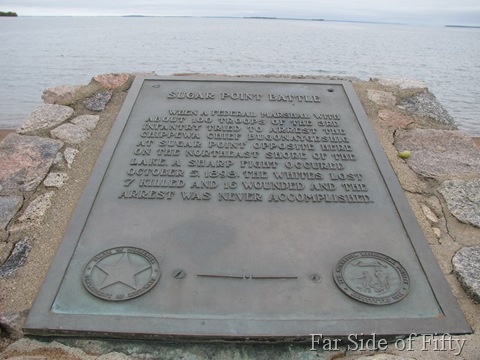 Far Side has been by here before, but only at night..the last time we were by here she had to take a flashlight out of the car to read the marker.  It says:

When a Federal Marshall with 100 troops of the 3rd Infantry tried to arrest the Chippewa Chief Bugonaygeshig at Sugar Point opposite here on the North East shore of the lake a sharp fight occurred October 5, 1898 the whites lost 7 killed and 10 wounded and the arrest was never accomplished 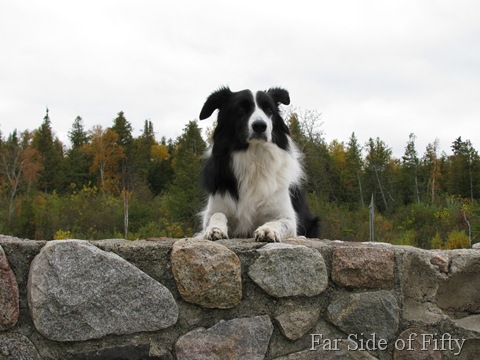 It sounds like Chief Old Bug was a tad upset about his tribe members being picked on by local officials.  Members of the Tribe were being arrested and then transported way out of the area for trial.  Then the Lumber Companies were coming in and not paying the Indians what their trees were worth. This was considered the last Indian uprising in the United States. I betcha never knew that ?

Far Side let me blog today because she needs to do real important stuff like laundry and raking leaves into the woods and out of her garage:)

Chance, I love you.

What a lovely informative post, Chance. You tell Far Side to get a blower for those leaves, Dirt finally caved about two years ago and let me have a blower. He always made fun of the folks with blowers, so I did too thinking blowers were stupid, until I used one. Holy Toledo, they are way cool, albeit windy, they get the job done in an eighth of the time, or less. All the more time to play ball with you! Soon I am going to get one that sucks stuff up and mulches it, and is electric, so I can use it at the fair at our booth for clean-up in the morning. The only place I use it on the farm is right in the front yard so it doesn't matter that I would have to plug it in.

You do know you live in Minnesota don't you Chance? You tell Far Side that it is obvious that you do, because no where else is the Lutefisk in the stores already, we have to wait until late November and then only stores in blatant Swede-ville areas.

Help Farside with those leaves today!

Chance,You should do a book or at the very least a photo calendar for us to enjoy. It isn't every dog that is so darn photogenic !

Well ya just look all majestic like a king lookin' down on his subjects all posed high on those rocks! It's so good to hear from you and I sure hope ya didn't freeze your paws too bad. You sure looked like you had a blast playin' in the lake and thanks for all the great info. Who knew you were sooooo smart.

Cuddle up to Miss Connie and tell her Nezzy said howdy! If your lucky maybe there will be a dogie treat for ya.

God bless and have a terrific day!!!

I have 1 question for you Chance. How come you & my dog Chaos like to play in water outside even when it is cold, but don't like to take a nice warm bath?

I agree with Nezzy you look very majestic on those rocks.

You are looking fabulous as usual. I loved the story about the Indian Chief vs. the Government. The Duchess says the Government has not changed a bit! Wonder what she means by that? :)

I like the idea of calendar 'Dog' with Chance being January and Buddy being December. Good inidan story. I have indian heritage. Your Chance is Superdog. Love when 'he' tells the story.

Congrats to your parents. Lovely family photo. You and Far Guy make a lovely couple.

The last Indian uprising in Colorado resulted the Utes being packed off to Utah.

You are looking mighty good there Chance. Looks like you were having a lot of fun in the water. It was nice that you were able to get out and have some special time with Far Guy and Far Side.

Chance - - - we should all be so fortunate to look as good as you do in EVERY single picture the "Fars" take of you! I have to censor more of mine than I keep - - - can't remember not to talk so my mouth always looks so wrong. I agree with Lisa - - - - cold water outside is fun but not a warm bath?

Chance, Barnie got to see his Uncle Darryl today and he cried and laughed to see him. He use to come every Sunday to stay with him and his Dad Clarence too. He did that for seven years and Barnie got to see him every single week,and sometimes walked with him. Now that Clarence is gone, he had not been able to see Darryl except on holidays. He was so thrilled, just like you were to see Leech Lake. Darryl has six cats so Barnie can't go visit him.
I remember Leech Lake and it made me think it was full of leeches.

Great to see you, Chance. You're as funny and handsome as ever! Tell Far Side to stop being all domesticated - I'm getting worried about her! ;-)

Great post and Chance you are so handsome! These are wonderful pictures of you!

Poor Chance, no one to play in the water with him;) No ship came in either I see! (but I think he is on his ship all the time;) Leech lake, what a name!

Chance, you look marvelous and it sounds like you had a spectacular day!

I <3 smart border collies! And ones that like their history are extra super special!

wish you'd come be my dog for a few days and do some blogging.

love the water and all of the photos. Chance looks happy. rose