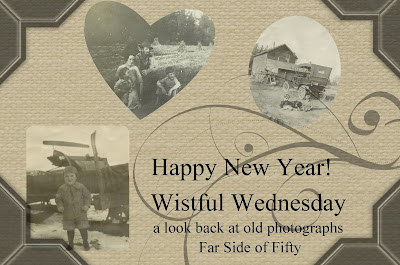 On December 25, 1913 Far Guys Grandparents were married in Iowa. They were headed for Minnesota. The brides entire family was going. Her parents and her siblings. Land prices in Iowa were very high. The gumbo soil was hard to farm anyway. The price of farm land was much lower in Minnesota. They sold what they could, and then loaded what animals, equipment and household possessions were left on a boxcar for the trip North. The women and children rode in the passenger section of the train.

They arrived in Park Rapids, Minnesota in the winter of 1914. Far Guy's Grandpa H. was disappointed when he looked at the farm land that he had purchased. It was nothing but Jack Pines and sand. He rented a different farm for two years until finally trading off his parcel of Jack Pines for some land he could actually farm. Of course he had to pay extra to make the trade. They bought good land this time, and spent the rest of their lives on the farm. It is still in the family and still known as "The Farm" Far Guys Uncle owns it and it is just four miles down the road from us..or two miles as the crow flies. What this young couple liked most about Minnesota was the trees. 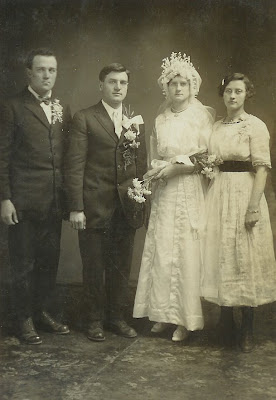 On January, 01 1914 Far Guys Great Uncle and Great Aunt were married. When they got to Minnesota, Great Aunt Emma said " There were no roads, only trails winding through the woods and the wolves howled every night."
I love Great Aunt Emmas head piece. She was always a colorful woman..she probably designed it herself.

Far Guy and I had always wondered why the move from Iowa to Minnesota, two relatives were kind enough to answer our questions. So that we could put more of the puzzle pieces together. It must have been some adventure:)
Posted by Far Side of Fifty at 10:24 AM

Such an interesting story and beautiful photos. I wonder about some of these headpieces, don't you. I don't even enjoy wearing pierced earrings - can't imagine what that headpiece would feel like!

Another thing that interests me about these photos is how the men seem to be wearing perfectly ordinary suits but the women are still wearing 'old fashioned' dresses. There seems to be a kind of disconnection.

I love that headpiece, too! That's cool. She was probably a woman way before her time!

Wonderful story! and the pictures are beautiful! That's great the land is still in the family.
My GGF & GGM moved to MT in 1860's..we still don't know the 'why', and the lands they owned are still called by their name, altho a different family owns it now. I love family history!
Have a wonderful New Year Connie! (I'll be cuttin' Zzzz's when it rolls around...)

I's great you're getting this info while the folks who know the stories are still around. I lost two aunts in 2008 and with them went a lot of my history. My dad had only one sister. Although my mom has a couple of siblings who are still around, Aunt Dortha's memory is impacted by Parkinsons and the drugs she takes for it, and my uncle has never seemed to have a lot of interest in the old family lore.

Have a wonderful New Year!

And all the Wedding People look so very
HAPPY?????????? Always amazes me how
sad/depressed the family archive photos
look! Our family has many old family photos also, but no one knows the identity of most of them.

WISHING YOU AND FAR GUY HAVE A TRULY WONDERFUL AND HEALTHY NEW YEAR!

I think family history is fascinating. My oldest brother has always been interested in the old photos and talking to older family memories to hear the stories. The problem with many of the relatives is that they didn't want to talk about alot of their history. I love your old photos. I did do the Ancester.com thing last year and found out lots of interesting facts. But there are still mysteries out there to be discovered.