This ornament may not seem like much to you. But this ornament tells a special story. I made it sometime in the late 1970's or early 1980's. That is when poked ornaments were all the rage. They were called poked because that's how you made them. A Styrofoam ball was covered with small pieces of fabric, the pieces of fabric were poked down into the Styrofoam with a metal nail file, a quilted looking ornament was the result. 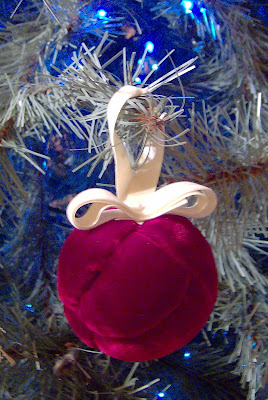 My Mother ( a true fabric saver and hoarder) had some left over red velvet from the Flower Girls dresses from the day Far Guy and I were married. So I made an ornament. I made it because I wanted something to commemorate the day we were married. You see we were very young, many of our friends that were married young were already divorced. So I guess what it all boils down too..I made it because I felt lucky to have made a good choice when I married the man of my dreams.
We got married in December to drive our Mother's nuts on purpose! Not really, we had originally planned a September wedding. warm weather, beautiful fall colors! Then we thought about just eloping. All of our ideas were met with much negative discussion. Far Guys Mother chose the wedding date, as she was insistent that Far Guys sister be present.
So we got married in December, a day so close to Christmas that we never celebrate it. We have never had a party or a gathering of any kind. Some years we make an effort to go out to dinner. Most years we just say ..well we made it through another year, and we are still best friends and soul mates, forever in love until death us do part. It was not the day we had imagined, we are both plain people, it all got out of hand. It was not as fancy as some, but still too much hoopla to our liking. We would have been just as happy with a small church ceremony, and our marriage would have lasted just as long if we had eloped.
I do not remember too much about that day, I was too nervous with all the people. I said my vows, Far Guy said his= married! It was twenty below zero that day, it was so cold. It is a blur. Our anniversary is coming up soon, want to know when? Would you like to see a few photographs? Then come back tomorrow the 20th.
Far Guy was 19, and I was 18, young and in love! Holy cats we hardly recognise ourselves..thirty nine years ago tomorrow. :)
Posted by Far Side of Fifty at 6:42 AM

What a wonderful story! I love the red velvet ornament and the memories attached with it. I do not remember those - what a great idea for keepsake fabric! I wish you a very special day tomorrow - filled with loving memories.

I laugh when I hear how brides spend many $$ packing away their wedding gowns. Mine is folded and stored in a dresser drawer. Every time I pick it up, it has no wrinkles. Why? Because my mom made it out of polyester fabric! That synthetic fabric from the 70's...do you remember? It looks as good today as it did back then!

My wedding was simple, plain. and just family. My folks insisted that not even friends be invited. We had chosen Dec 26 and my mom insisted we get married before I started teaching (I was just out of college). We had 2 weeks to chose from and we chose 6 days from the decision. And people who had large weddings are separated and divorced. We will celebrate our 43rd this August.

So glad your has lasted long, too. Sometimes you just get lucky!

That's so romantic! I definitely want to see some pics of your wedding - guess it was definitely a white wedding in more ways than one if it was minus 20!!

My mum married in August - but that was in Scotland - so it was cold and pouring down with rain!

Both of you were just babies! I would love to see some photos.

I am sure that it took more than luck for you to come this far. Congratulations on you Anniversary.

We got married on December 21, 1967. 41 years ago. I think of how that must have taxed my parents as they were in the middle of several long years of poor crops, but I had my December (Christmas) wedding. I still think I was shelfish, but oh. well.

In the wedding my Momma decorated with a silver metal tree blue ornaments (my colors). She and I shared that tree over the years, I have it now as she has passed on. I put the tree out with the same blue ornaments every year. The ornaments are frayed (they were that ribbony like stuff) but I still love them. More than likely our marriage is worn also. But to me the tree, the ornaments and my marriage are still the same shiny beautiful thing as the day of my wedding.

A wonderful story....what a lovely memory to have attached to a Christmas ornament! And Happy Anniversary to you both! :)

Awwww! I'm sure you didn't drive your mother completely nuts:)

What a lovely story -- I can always count on you to make me smile, and remember that there are some people who get it right the first time!

Oh so lovely the memories you share with us!
I think your Red Velvet Ornament is precious!
I made a few of those ornaments too.....we called them quilted! We used a variety of multi colored, patterned, fabric and used them for ornaments on gifts one Christmas!
I feel fortunate to still be in love with my husband! We celebrated 46 years Sept. 29th.
Being Dairy Farmers for the first 25 years, we've seen the ups and downs of farming! Sold the dairy herd when our son went to University, and we both got jobs in town!
How the years fly by.....we are now retired, but still have beef cows and bale hay!
Congratulations to you Connie and Far Guy!
....I can't wait to see your wedding pictures!
Congratulations on your 39 ANNIVERSARY!
Liz in PA