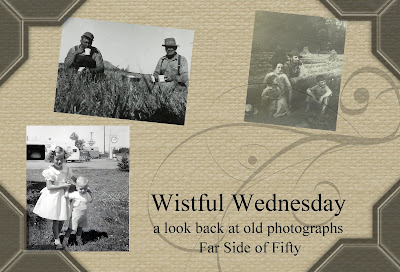 This photograph was taken by my Mother, fifty four years ago. I was a little over three years old, and my brother Carey was nine months old.

It looks like I got two dolls and shared one with my brother. Would you look at those new wheels! I can imagine I did some fancy pedaling throughout the house during the winter. Note the fancy head bonking devices in use. My brother is sitting on a blanket and there is a pillow directly behind him so if he falls over, he won't hit his head on the old hardwood floors. 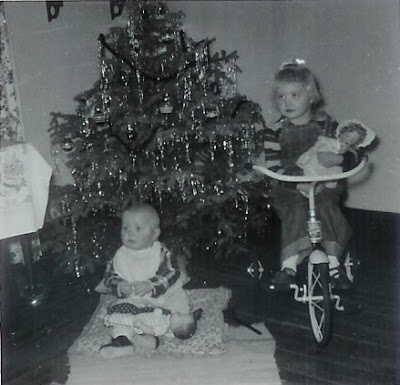 There was lots of room for the Christmas tree in the "front room." The tree has tinsel and some very fashionable glass ornaments. We did not spend very much time in this "front room" it was sparsely furnished, there was a table in front of the window that faced east, plants were on that table. There was a big old rocking chair, my favorite part of that room was a huge old furnace grate in the floor where I could sit covered with a blanket and be warm as toast.

The big old farm house we lived in was drafty and cold in the wintertime. We hardly ever used the upstairs, there were three or four large bedrooms up there, with a different linoleum on the floor in every room and huge windows with thread bare curtains. My Grandfather Y. and my Uncle Andrew may have been the only people to sleep up there and I think they slept on army cots. Children were not allowed upstairs. There were lots of flies in the windows upstairs. We had no bathroom indoors..only the outhouse..outdoors:)
Posted by Far Side of Fifty at 10:12 AM

Oh - you and your brother look so sweet! I betcha you're still sweet today?

All the houses in England in my memory are cold and draughty.. brrr!

Many thanks for sharing your Tagore quote with me - I do love him!

My dad was so NOT into Christmas, but my mom did what she could. It was always mostly a nice dinner, family singing, and some small gifts. I do remember one year it was amazing that my sister just older than I and I got a doll. Mine was blond, hers was a red head.

Yes, you two are cute cute cute.
(We had a cold basement, with beds dormitory style - for all of us kids.)

What a lovely, lovely post! I LOVE the pictures! :)

Thanks for sharing, that's awesome.

you were cute kids, your brother looks like one of your dolls.

Well I forgot again! So, I'll have a second Tardy Thursday..lol. The picture is adorable. Your bro is a "Baby Budda" (term in our family that means a brother and a butter ball). Joe and I had an old house in versailles that had "forced heat" from a grate in the floor in the hallway between the bedrooms. That was one cold house! The fireplace had been bricked up. We survived with a space heater and lots and lots of blankets. The kitched was warm when we cooked. I loved that old house. The people who bought it immediatley put in central heat and air. Joe and I could never bring ourselves to rip the house up to do it. Thanks for the memory.

I am definitely going to participate in some of the challenges, like Sunday Stills....I think I will learn a lot. Thanks so much for your encouragement! :)

That is so nice you shared your doll with your brother. I had a brother 2 years younger than me.
It ended up when we were older that I played cars instead of dolls because he drawed magic marker mustaches on my favorite baby doll. Bless her little heart, she had to wear that thing for years. Plus that hair cut I gave her didn't help her appearance either. lol.. I still have the pitiful looking baby packed up in the closet.
Loved your picture and story.

That is so nice you shared your doll with your brother.
I was an only child, but would have loved a sister or brother to share with.