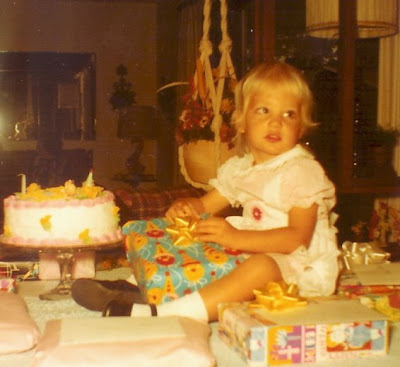 Does she know that I thought she would be a boy? Now this was way before having ultrasounds and finding out if you were having a boy or a girl. I was convinced she was a boy, Far Guy wanted another little girl (It was part of his dream.) She would have been a Travis nicknamed "Duke" by her big sister. I had Jennifer picked out for a little girls name. It was the most popular name from 1970 to 1984 according to the Social Security Administration who keeps track of some of these statistics.

There is a story behind her nickname of "Jenny."

I had a wonderful Aunt Jenny, she was a strong woman, widowed early in life and left with children to raise, she did it on her own. She worked at the Nursing Home on the night shift, hard, hard work. She was a very kind Christian woman, slight in stature but long on friendly and full of stories and smiles, I was always welcomed into her house, I loved to camp out on her couch on a Friday night for a school activity on a Saturday morning. It saved my parents a trip to town, and I could read all evening long, and drink coffee! The coffee pot was always on at Aunt Jenny's house. She loved to play Bingo and after I graduated from High School I would often meet her at the Legion for Friday night Bingo. She was passionate about bingo, it was her night out. She was a really good Aunt.

So perhaps I wanted my future Grand kids to have an "Aunt Jenny" that was just like my Aunt Jenny. Now the little girls call her "Auntie Jen," and they know that she will be there for them anytime, unconditionally. She likes Bingo too!

As for her middle name, Far Guy picked that...after me, we share the same middle name Joy. No one ever called her JJ thank goodness, but she is Jenny or Jen and sometimes even a nickname from her scrap booking friends, Dolly. There were too many Jen's that scrap booked together, so they just nicknamed her Dolly, and I became known as Dolly's Mom.

So today is her 33rd Birthday, funny it seems only yesterday that she was running around with her blanky, or sitting on a table enjoying her birthday. Now she is a lovely young woman with a family of her own, someone we are very proud of. If you would like to wish her a Happy Birthday go here: http://www.areavoices.com/dahlenje I made her a cake, and we are headed farther Up North to sing Happy Birthday in person:)
Posted by Far Side of Fifty at 1:03 AM

Wish her Happy Birthday from me and have a wonderful day!

She looks a lovely little toddler - all bonny and blonde.

It's amazing how quickly time passes, isn't it? Scary. My daughter will be 20 in just over a month. How can that have happened? Last time I looked I'm sure she was only 6!