Usually Tuesday is a "no mail" day but hey we got a new phone book!

We had no place we had to be so we could do whatever we wanted all day long.  Far Guy woodcarved, watched birds and held down the fort for a delivery.   I had an adventure spraying Thistle and Poison Ivy and tried a new ant bait....by 3 PM I was tired and hungry...had lunch followed by a nap.   Far Guy cooked supper...I woke up from my nap before he could wake me up and say "Supper is ready sweetheart."   I told him he could say it anyway.

After supper we sat outside watching a mama bird feed her noisy babies.   In the afternoon Far Guy witnessed a Hummingbird chase a Robin and the Robin had something in its mouth.  Not sure what it was...but it was a strange interaction.

We went for a ride.  We met a very friendly Labradoodle named Louie....he wanted to go for a ride with us!

The potato field is in bloom.   The air smells so fresh and clean after the last rain we got...not many skeeters yet. 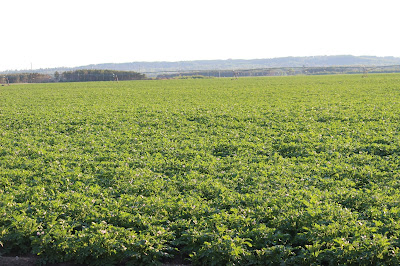 We had a really nice Tuesday.

Labels: Minnesota, not much happening here