Far Guy and I were discussing elementary school days...he remembers his Kindergarten Teacher and his Sixth Grade Teacher...he could not come up with any of the other teachers names.   I asked why?  He said apparently they made no lasting impression on him.   He went to a large school were there were several sections of each grade.  He walked to school. 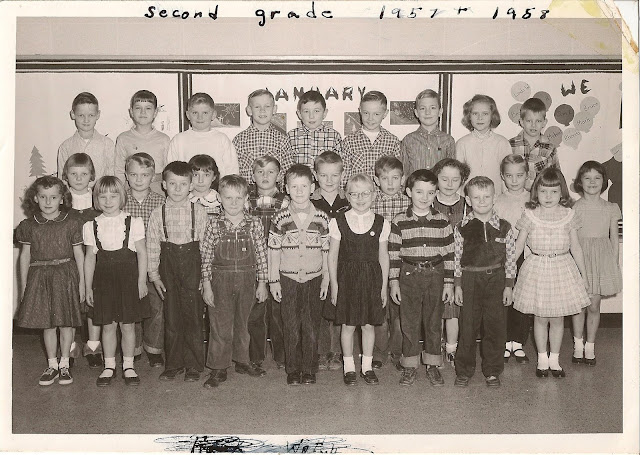 I went to a Grade One through Grade Four school in one building and Grade Five and Grade Six in another building.  Most of my teachers were neighbors.  I know all their names.  I do not recall the name of my Kindergarten Teacher in North Dakota...or my Third Grade teacher in Iowa...maybe they did not leave an impression on me...or perhaps it was because I was only in those classes about six weeks, before we went back home to the farm.  I rode the bus...getting on at 7:45 AM ...school must have started at 8:05 and ended at 3:25 so I was back off the bus at 3:40 in the afternoon.

I wonder do they still teach multiplication and division in Grade Three?  Once you "get" it...it was fun to do...it took me a bit to get it!  I recall thinking I would never pass Grade Three.

Far Guy had a few unusual happenings in grade school.  Somehow he pushed an eraser up his nose...he doesn't recall how they got it out....he does recall that the teacher looked disgusted.    One day he had a blister on his hand so he picked at it with his pencil...then when the red line started up his arm he kept making marks on his arm watching the progress...a classmate (Linda K) noticed and told the teacher...he said his parents were called and he was rushed to the doctor who explained how blood poisoning works.  I think he was a handful.

I know my neighbor kids have learned their multiplication tables. Math and science comes easy to the oldest and harder for the middle child who is 'free' spirited! I loved looking at my old school photos too.
I was in constant trouble in grade school. Until they understood that the teachers just bored me.

Oh my, Far Guy reminds me of my middle son - enough said! Our tiny town had several tiny elementary schools. My parents liked to move so I attended several of them. I still remember every teacher.

So scary about the blister!! I went to one building for grades.1 - 7. Many of my teachers were people from my church. I was very bashful in first grade and the old maid teacher from church would hold me in her lap til I quit crying for half of the year! Lol

Far Guy must have given his parents fits. The stories are good stories to tell the children and grandchildren...after they are too old to do them themselves. Tom was the same type of child. No wonder his mother tried to send him to school when he was a little too young to be allowed according to the state regulations. After a couple interesting episodes he was told not to come back until the following year.

Cute picture! I can still name my elementary teachers but not all of my college professors, which seems weird since college was certainly more recent. :-) Multiplication and division starts before grade 3 these days - at least it does in SD. My 2 oldest grandkids are both in 3rd grade this year. And both were beginning those math tasks last year already.

I still know all my teachers’ names through high school! Not sure what that says about me. It sounds like FG was occupied with studying “other things” and not too impressed with his teachers! Such a cute bunch of kids in your photo, all dressed up for Picture Day.

I can remember all my teachers names along with the names of all the students at the time in all 13 grades. But that is probably to be expected when we had less than 200 students and teachers in the entire school. (There were 8 of us in my class.)

I had a boy stab me in the next with a pencil and the lead broke off. There was a lump, I remember, and eventually I had to have it cut out at the doctor's office. I do remember I was awake so I must have had local anestetic. My mom was in the room with me and she fainted when he cut into my neck. That shocked me more than anything! I forgot all about that until I heard FarGuy's story. :)

I remember several of my elementary school teachers (I am about the same age as "Far Guy"), but one in particular, Mrs Beak, did not like me, so memories of being in her 5th grade class were not pleasant. I had trouble with math, and if she called on me to provide the answer to a problem, and I missed it she'd make snide remarks, etc.

I bet he was a handful lol! I can only remember the names of a handful of teachers I had in my school years. I remember Pre K, Kg, first grade, sixth, and a few from high school - that's it.

It does sound as though FG was a bit of a character. We had a boy in our grade 1 class who shoved an eraser up his nose. To this day, we call him Honker.

When I saw your photo, it reminded me that I don't have any class photos that I can recall. I know my older brother did - at least of kindergarten.

Have a good day!

A classic photo! I hope schools are still having group photos taken.

I chuckled about the eraser up Far Guy's nose. Kids!! Especially boys!! My memory is fading more and more with each passing day. It seems I can remember at least some about grade school but nothing about high school or the names of the teachers I had there. Thank you for the wonderful card you sent me, Connie, with the loving sentiment inside. I received it yesterday and have it in the prominent place in my home where I can see it all the time. ~Andrea xoxo

I enjoyed hearing yours and Far Guy's memories from grade school. It certainly was a special time for all of us. I remember those years but not the teachers names, maybe because we moved every two or three years. It's funny, I usually made good grades in school but I do remember third grade being more difficult. Far Guy's antics sound similar to some one of my sons pulled. He once put a pencil in an electrical outlet in class and caused the outlet to burn out. He did know better but always had to "test" things!

I'm laughing at this from a perspective of a former kid in a large elementary school, but also as a former elementary teacher. I've known a "handful"

I remember all of my Grades chool teachers as well.. Even Ms Kirkner! Who was only there one year. Third grade was a very bad grade for me. ( Math was impossible! Even though I loved it later in High school.) But at least I never shoved anything up my nose. ( I did swallow a Marble, though... Boys will be boys, I guess) Cheryl's Brother shoved a matchbox car wheel up her nose. Had to go to the doctor with a "retrieval tool" to get it out. So ... boys doing odd things sounds like Par for the course.

I like the guy with the overalls. that's what I wore for my gr 3 photo.

Yes, he sure does sound like he was a handful, all right. Once you pointed him out in the school picture, I can see he's still the same guy. :-)

Far Guy just sounds like he was a kid who was curious about stuff. I don't remember any of my teachers' names from K through 4th grade. I think it's because we moved away during the middle of my 4th grade and I never saw those people again. I can remember my new 4th grade teacher (Mrs Buell, I hated her, she was MEAN!) and 5th and 6th grade, but after that, when I went to junior high and had multiple teachers I don't remember many. Even in High School I don't remember many.

Love the picture of far guy at school....do you have one of you? I can pretty much remember the names of all my teachers in 1st thru 6th grade. Yup, sounds like far guy was a handful back then. It's fun thinking back that far...especially the good experiences! Hope kids today get some good experiences too!

I went to a small school. I remember all my teachers….fondly.

Oh my Goodness. I'm sure glad none of my boys did those particular things but they made up for it once they were teenagers. I wonder if the eraser was one of those little ones that were on the end of a pencil. That would be very hard to get out.

I remember grade three arithmetic being particularly difficult too. I seem to have a bit of a learning deficit in that area which the teacher just couldn't deal with, so I never got a good grounding.
I remember throwing up in grade four.
Don't remember too many teachers names, but the favorites do stick!

I want to know was it a pencil top eraser or a pink rectangle? Thanks for the chuckle! Love you both! PS I'd like to request a blog post please. "Matching Dresses" :)

I enjoyed reading about both of your grade school experiences. I remember most of my teachers, especially Mrs. Watkins who was my teacher in both 1st and 3rd grade. I absolutely adored her. Such a kind lady. I spoke on the phone with her one day when I was about 30. She remembered me out of all of the students she had. That's amazing to me.
Blessings,
Betsy

Yes an eraser from a pencil