We had a few frustrating days, with medical appointments changed and cancelled.  The right hand doesn't know what the left hand is doing and they are not consulting each other.  They are not helpers...well we had one helper who scheduled everything and later in the day a different nurse (Nurse Ratched type) called and cancelled everything...she was a real bitch non helper.

My eye doctor called I have a wrinkle in my retina, he says he is not concerned at this time however I have to do the test over again in six months.  Should my vision change I should call him immediately.   He is a helper.

We went for a ride on the trails yesterday and while we were gone our patio table exploded...the glass top shattered into many pieces...Far Guy says a million pieces.  We were getting it cleaned up when my other baby brother and she who sees robins first stopped by.  She who sees robins first helped me sweep up the glass.  My other baby brother said we could put the steel frame in his bin that will get recycled someday.  Their Grand Ava was along...she helped by carrying a vacuum cleaner from the garage.  They were all helpers.  It took a while to vacuum all the cracks and crevices between the pavers.   We were tired had a nap and after supper we vacuumed some more...we are reasonably sure we have that huge mess cleaned up. 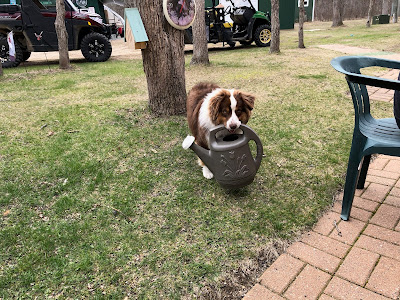 Even Baxter can be a helper!

Our area has a number of anti vax people...I have relatives that are against vaccinations.  How are they helping vulnerable transplant patients or children that are immune compromised.  Of course none of them have Polio, Diphtheria, Whooping Cough, Measles, Mumps,  Ruebella or Small Pox...why are they protected from the diseases that could take their lives...because they had mothers (helpers) who cared about them!  Yet they choose to play the Covid lottery...I guess that is their choice.  Sadly they are not helpers.