We lost Internet, TV and phone again completely.  The repair guys finally showed up, it took them about an hour to find two problems...good thing all the equipment is theirs because two whatchamacallits had to be totally replaced.  So far so good, but Far Guy says "Don't hold your breath."

In our area of the boonies our only other choice is a Satellite Company that I hear is unreliable. ...so it is what it is.

The quiet in our home was horrid, I could hear the clocking ticking away in one ear and Far Guy snoring through his afternoon nap in the other ear.   I finally resurrected the DVD player in an old computer and apparently played the Bee Gee's One Night Only too many times ...the last time I played it Far Guy started to sing Na na na na  and he wouldn't stop.  He put in an old Bob Dylan DVD which he quickly rejected  and he embraced the quiet for a few minutes until he started.singing Bee Gee's songs just to irritate me.   Well at least he was singing to me... :)

I got a number of projects done over the weekend.   I finished up some hearts for a charity( Peyton Heart Project)  I packaged them up to mail. 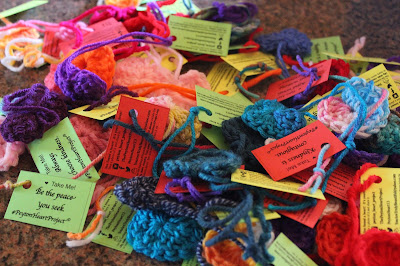 It was a perfect project for bits and pieces of scrap yarn.  I would like to do more someday.  For now it is a project I can cross off my list.

I have a few other new crochet projects that are rattling around in my head at the moment.  I have decided that a trip to Hobby Lobby and the local yarn shop will happen around April 1st (two weeks after my last shot)...although yarn could be ordered online....I want to line up the colors and look at them in my cart.

I am still working on wasp nests using up all the grey yarn I have on hand.  She who sees robins first dropped off a whole skein of grey yarn for me.  I will have enough nests for the entire neighborhood and even a few to mail off to friends.   The pastel mosaic scarf is almost done, and I have a cashmere shawl in the works too.

I have made absolutely no progress on the milk can project this winter.  The rollags are stored in paper bags until I can figure out how to spin on that old wheel I have...I have a friend who said he could help me or maybe a cousin I could ask for help...next summer....after Covid...if there is such a thing.

Far Guy has his wood carving out...so far it looks like a bunch of holes in a piece of wood.  Only he knows what it will be.

So sorry to hear about the loss of internet, TV and phone Again. I know how frustrating this can be as it happens to us around here. It has always been on their equipment , which was installed in 1983, and really needs to be upgraded. Oh well, life goes on. The snow banks have started to melt a little with the warm upper temps we have had. YAY!!!! Love all the little hearts.

I've heard terrible tales regarding certain internet companies. Ours is through the local phone company and they updated to optical quite a few years ago. Our underground lines were replaced and we have high speed internet.
Don't you love it when the guys like to be funny yet irritating? Of course I'm right back 'atchya'.

Sounds like the two of you have taken a second long breath. Maybe by the next time you really need it spring will be up in your neck of the world. Everybody in this neighborhood is hoping when this snow is gone...it is melting...spring will be here.

Sorry you are still having problems with your service, hope they actually fixed it properly this time!

Too funny, you guys having a music sound=off of sorts. Glad you have your cable back for now anyway.

Do you do Zoom? Maybe I can help you with your milk can project?

I had forgotten about the Milk Can Project but now look forward to it progressing. You made me laugh about the DVD war going on in your home. :-)

Hope the internet issue gets properly resolved soon. In the meantime, I'm glad you're making great progress on your crochet projects at least.

What, no Desiderata for you? "Remember what peace there may be in silence"?

The quiet was peaceful for a number of hours! Then it was just irritating!

Yes I do Zoom. I will give your idea some thought!

I would find the quiet very irritating too, and very quickly. I'm not a person who enjoys total quiet. Then I hear my ears ringing and that just makes me more irritated. LOL Hope your connection to the world keeps working now.

Yes, most companies don't worry much about updating equipment "out in the boonies", do they?! It's the same with our phone company. Our telephone (landline) is going out constantly. Hubby takes care of calling the phone company because I just don't have the patience. The last time it went out, a couple weeks ago, it was out for 10 days. Nothing but static on the line. They finally fixed it and called hubby afterward, saying the problem was a couple miles down the road. Whatever! I think it's rang twice since being fixed. I like a little background noise in my day too, most of the time. The source of that has changed over the years: it used to be talk radio, then it was CNN for awhile when we had cable tv (& when CNN was unbiased & just reported the news), and once in awhile it was old Honeymooners VHS tapes... now it's YouTube played on my living room tv. It won't be long until it's something else. I'm glad your problem is finally fixed... or is hopefully finally fixed! ~Andrea xoxo

I'm beginning to wonder if we are ever going to get 'beyond COVID'. I was watching RFDTV and the famous Dr. Fousie? was on there and he said MAYBE in April the USA can go down one more step, but he is not predicting anything. SIGH

I think I am just too used to noise. I often have my mini television going in the kitchen while I cook and bake. I don't even know what the program is, I just like the voices.

I think I told you that the park we're at promised "free wifi and cable". Ha! Neither one works at all. We don't miss the TV as we rarely watch it, but Dennis needs wifi for work and I rather enjoy it too. Luckily we're grandfathered into our unlimited data on our cell phone and ipad. I can use the hotspot on them for my laptop but Dennis finds himself working lots of extra hours. Anyway, it's annoying because we're paying top dollar because of all the amenties. Oh and it has an indoor pool and hot tub too. Guess what? They're closed because of Covid. So basically we pay a LOT just to park our RV. We like it here but we're glad it's just a short time and not permanent because we would go broke!
Take care Connie.
Blessings,
Betsy

Really made me think--I don't own a radio anymore. I always used to have a battery operated one in case of tornado...when did I stop? Alexa can play music for me if I have electricity, I guess. Living alone I am used to silence.
I hope this time they finally fixed it.

I'm sorry to hear you are still having trouble with your internet and TV. These days we really depend on both and especially internet since we use it for everyday business now. I hope they found the correct fix for it this time!

I love your hearts for charity. What a great way to use up small bits of yarn and help others. Have you heard of Izzy Dolls for charity? They are very small dolls that you either knit or crochet and are sent to children in difficult war situations. I know another blogger that makes them with her leftover yarn. You can learn about them here:
https://rods.sk.ca/blogs/post/rods-distributing-izzy-dolls-for-refugee-children
That is a Canadian site but I believe there are sites in the U.S. too.

Yikes, I'd be lost without television and internet. I do have data on my phone but it wouldn't be enough to keep me going for very long.

Glad to hear it is fixed, at least temporarily. The hearts are sweet!

Look at all those beautiful colors and messages on your heart project!! The BeeGee's are fun, for a while. Hope the new whatchamacallit's keep you connected!

I used to be really bothered by a quiet house, but reading your post, I realize how ofter my house is quiet not. I can hear all of Tom's clocks ticking and his deep breathing as he has fallen asleep in his recliner next to mine. I guess I am Ok with quiet finally.
I have wondered about the milk can project.

It sounds like you have made good use of your “time off” the internet, etc.

You get so much done! What do they use the hearts for? I have fiber now and it is reliable and you can watch t.v. when it rains! LOL! The Satellite would always go out but this fiber is slower than what I had before and I can't use my landline if the power goes out and cell phones don't work in this neighborhood. I just watch You Tube and Netflix and news. Cashmere? Oh la la! That will be oh so soft and beautiful!

The hearts are left for others to find.

Yes I have heard of this project but have not been involved, it is a great project!

Oh how I hope your internet trouble is in the past, technology when it doesn't work is sooo irritating :) You will enjoy that day when shopping for yarn comes!

I'm with Far Guy: "Don't hold your breath." Too bad there wasn't another reliable alternative for your area.