One of my cousin's died this week.  Dean was 62 and on my Mother's side of the family.  I wasn't close with him, but still feel the loss of a younger cousin.  Two of my cousins are now gone from that side of the family, Linda last January and now Dean.   The funeral is today, my other baby brother will go to the visitation before the funeral and my parents are going to the funeral.   I will watch the funeral online.

Yesterday were received news that an old friend died, Alicia was 82 years old and died from complications of Covid.  We are sad for her husband who survived Covid but has Parkinsons.

My other baby brother and she who sees robins first got their first vaccinations yesterday.   Steve and Jo our next door neighbors got theirs too...so I see some visiting in our future in the Spring!

I had a whole bunch of stops to make in town yesterday.  Post Office, bank, three grocery store pickups and a stop by the meat market...and we recycled!  I even managed to snare some Lysol Wipes...but they were out of Artisan Bread....so it was mostly a success. 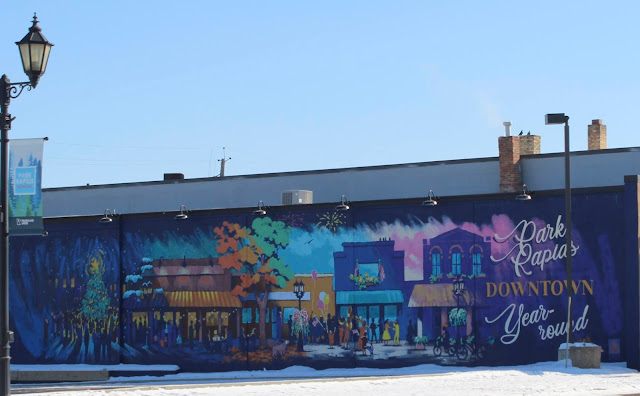 I finally took a photo of the mural in town...note the Christmas Tree is upright.  they want you to shop downtown year round!  I am sure bikes are not allowed on the sidewalk and there used to be signs that said "No Loitering"...and the mural looks like it has a lot of loitering going on.

For the record, the gal in the Post Office had her mask hanging off one ear while assisting another customer and when she saw me she smiled and put on her mask properly.  So I must be part of the elite mask police.

Also for the record gasoline went up another 20 cents a gallon, that makes a 70 cent increase since the election.   Gas is now $2.69 per gallon in town.

Or the refineries closed in the south due to the cold.

I'm so sorry for your loss. 62 seems so young. :(
I'm also so sorry for the loss of your friend. Dang, it just stinks doesn't it?
I had to chuckle at the Post Office person.
Now that our county is having less positive cases people are starting to relax all of their habits.
However most stores are still sticking to protocol.
Eeeks on gas. Yep. It's going up again. Last February it was 2.58.9 here. I wonder why it fluctuates so much.
I was amazed at the week it was .99 cents. But that was when no one was going anywhere. Travel must be up?

Your gas prices ar outrageous - i was appalled at having to pay $2.59/gallon. So sorry to hear about all the deaths in you life lately. Seems there are a quite a few people passing away lately. Do you think they are the "lucky" ones? Who knows what our future is going to be like! Sure hope Spring is just around the corner.

I love the beautiful mural with the upright Christmas tree, loiterers and all. I'm so sorry to hear about your cousin and your old friend Connie, my condolences.

So sorry for the loss of your cousin & friend. Sad at any age, or circumstance. The whole death concept is hard for me to digest... Beautiful mural! I helped a pro paint one in my younger years, and am fond of murals. Ironic to choose that image for a no loitering area tho. Funny about the PO mask, at least she smiled politely.

May your cousin and friend's souls rest in eternal peace.
I reserve judgement on the vaccine and it's safety until the long term effectiveness and side effects are proven.
Our gas is usually close to 5 bucks a gallon.....

My sympathies on your loss. I have cousins that I only met once in my whole life - I was a young adult and they were little kids. But I would feel sad with the loss of one of them.

Such an interesting mural. I think as a child we stayed in Park Rapids on a vacation once. Was there a deer park nearby?

Yes both a Deer Park an the Aquarium which also had a deer park:)

My condolences on the passing of your cousin and your friend. It can't be easy, especially when you can't attend the funeral except virually.

Condolences for the loss of your cousins. Nice mural. Interesting that this one has all the seasons. I like to look at murals. Karen

I'm very sorry about your cousin and your friend. Both were tragic losses to their families, I feel especially sad for the husband with Parkinsons. I'm sure she was a big supporter for him.

That post office worker would have been reported when I got home, that's for sure. I'm a b*tch like that, with mask compliance! :-D Also, when I hear of an 82 year old dying from the virus, I can't help but wonder WHO gave it to her (& him). Was she careless herself or was a child or grandchild careless around her? I see all kinds of pictures here & there, of relatives visiting the old folks & they have nary a mask on. Then I think of my own children & grandchildren who wouldn't be caught dead without a mask on, around me, and absolutely refuse to come into my house under any circumstances. It's because they love me and don't want me to catch the virus. I wish all old folks were loved so much! Yes, gas prices will continue to go up under this administration... as will taxes & other things. Tax & spend... tax & spend. *sigh* ~Andrea xoxo

My condolences on the death of your cousin and friend. I sure hope that these vaccines will put a stop to having the say that to people.
I'm with you on the gas prices. We're one of the highest price states anyway because we have so many gas taxes. I don't remember the last time it was below 2.50. I wonder what our future as a nation looks like. Many days, I'm not encouraged at all.
Blessings,
Betsy

I truly understand your feelings. I have recently lost cousins also and felt the losses keenly, especially, when a short time later my older brother died, all "before their time". But, as you said, " life goes on". I do like the mural!! So much better than graffiti, lol.💖

I'm sorry for the loss of your cousin & friend. We've lost three out of nine cousins on my Mother's side, including one of my brothers. It's a wake up call when you start losing those of your own generation.

It will be wonderful when your family and friends close by get their vaccinations and you can get together more often! We still have not gotten ours. Missouri is one of the worst states in giving out the vaccine.

The mural is great - I love all the colors and how the seasons flow together.

Our gas is climbing also. Horrid. Soon we won't be able to travel much. Terry is worried about fuel costs for farming. Sigh.

I'm so sorry about the loss of your family and friends. I am happy to report that vaccine must have been sent to my state, all kinds of people I know who have been on lists forever have had their first shot or are scheduled for drive through clinics this weekend. If you are 80+ you don't even need an appointment, 65+ still need to be scheduled. We 64 year olds are still crossing our fingers.

The sudden rise in gas prices is very puzzling to me. The pipeline was actually pumping gas to Canada, the prices rose before the horrible storm hit Texas; were prices artificially low or is there something afoot to raise them? We the people will never know. Gas is 2.69 in my town, 2.79 in the next town down the highway and we filled up yesterday in the next town (where my daughter lives) for 2.49.

I expect you do shop downtown year round because it’s your local town? Marketing people have very odd ideas.

I hope both you and Far Guy take care on the stairs. I heard from a friend who moved away some years ago and we rather lost touch. He has dementia and his wife fell down the stairs over a year ago. Nobody knows what happened because she was on her own in the house but it sounds as though she may never leave hospital. So take care.

Sorry for your losses.

Good for you for being the "elite mask police". Too bad more people don't set a good example.
I do enjoy your sense of humor. the mural was obviously pre-pandemic.

Sorry for the losses.
Maybe some visiting is in store this spring, so that's a positive to look forward to!
Glad the postal worker put her darn mask on for you.
Enjoy our spring weather in February! :)

In normal times I would shop at the dime store, the yarn shop and the thrift shop, the rest of the shops are either too expensive or just tourist stuff from overseas:)

I have zero contact with my cousins now,days, although I do send one cousin Kristine a Christmas card each year.

I love that mural....it is so interesting as well as pretty. We are awaiting our family's arrival any time...so we can finally celebrate Christmas together! Many gifts waiting to be opened! Maybe I'd better dust them off! :) Glad you got most of your groceries and many errands accomplished too. Sorry about your cousin and friend. May they be greatly welcomed into God's kingdom!

Who are these people in your family that are dying so young? Your PARENTS are still alive and planning on going to the funeral... So the Longevity Gene must be floating around your DNA somewhere. Many years good health!
Oh, And Cheryl has noted the increase in fuel as well... since the pipeline closure. I wonder who is getting rich off of this uptick in prices. It is a bad time to be diabetic too! ( Well, it is NEVER a good time to be diabetic... but it hurts more when prices for medicine double.)

I'm sorry for the loss of your cousin and also your old friend Alicia.
It's good that people put their masks on when they see you coming. They should have them on all the time, for heaven's sake.

Sorry to hear of the two losses in your circle. My dad was only 62 when he died, way too young in my opinion. I too like that mural and would enjoy looking at it in person, if I ever got to your neck of the woods. I get my first shot next Tuesday and hubby got his first one this week. :-)

Oh, my! That seems so young. I'm so sorry to hear about your cousin--and so soon after the other one. So difficult!

I'm terrible. I pay no attention to gas prices because I have to have it so it doesn't make a difference. I'm so sorry about your losses...that was a lot and so sad. I have 1 cousin that I stay in touch with.

A sad week for you. I’m sorry you lost loved ones. Gas here has gone up, too $1.99 two weeks ago, 2.49 yesterday. Just when we will be able to move about more soon gas goes up! We have first shots scheduled for next week - if the doses come in. Fingers crossed!