We woke up a tad chilly on Saturday morning.  The furnace stopped working sometime in the night.

Far Guy called the guy who sold and installed the furnace in 2013.   He returned our call in a couple of hours....he could come and look at it but it is cold out there and he doesn't have parts to fix anything...huh??  Not exactly a friendly kind of guy.

I said call Ryan a local fellow...he answered the phone and said he would be over in a little while.  The furnace is shot...it needs to be replaced.  The Heat Exchanger is under warranty....we could have not so friendly guy replace it...who knows when and if that would happen.  We looked at each other and said almost in unison "You can sell us a new furnace."

We have a gas fireplace and several heaters going...we shall not freeze to death.  My other baby brother brought us over a heater and my baby brother said there are several heaters at his house and we are welcome to use them.  Several neighbors and relatives called to check on us.

Ryan said he would get back to us on Monday with a plan for a new furnace.

We are warmer than were were the first years we were married and lived in a old trailer house with frost on the walls, and warmer than the winter that we spent living in an RV the winter before we built the house.

Sure the furnace could have picked one of those really nice above freezing days to crap out instead of during the Arctic Blast we are experiencing....but that didn't happen.  Oh well...it is what it is.

I am on the waiting list for a vaccination at the Clinic in Detroit Lakes Minnesota...thanks Cousin Linda for sharing that information.

So were are warm and alive and waiting on a vaccination for me...things could be worse. 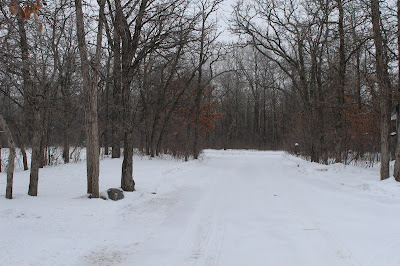 Of all the times for your furnace to die! Glad you won't freeze and will get a new furnace from a reputable guy. And a vaccine for you, too! Nice. :)

Holy toledo... a defunct heat exchanger after barely 8 years? I've never heard of such a thing! May Monday come quick, kiddo. It sounds like you folks will stay warm but I worry about your pipes. Be sure to write the manufacturer of your furnace, to let them know what happened, and tell them about "Mr. Friendly" who sold you the furnace and "didn't have any parts" to fix the product he installed. Manufacturers want to know this sort of information, especially if Mr. Friendly is an authorized dealer of the brand. ~Andrea xoxo

A guy who sells boilers should be wary of bad reviews if he doesn’t want to come out because it’s cold.
Keep warm!

Hubby is scheduled for Tuesday. I could have gone today, Sunday of all days, but with temps as you say way below zero ... only -17 here, I told the lady I'd wait for a slightly warmer day to drive so far.
Eeks on the furnace. I know we'd be up the creek if our little heater failed us. But I am glad you had back up!
The things we take for granted until suddenly they are not there!
Stay warm and congrats for getting on 'the list'.

A new furnace is the way to go, glad you have a local guy who can help you out and that you have enough means to stay warm- and I'm praying your electricity doesn't go out . Thank goodness for fireplaces!

Oh no, this is not good news! Why does it always happen at the worst times? Every single time our AC has ever gone out it's been when the temps are 100 degrees, so of course your furnace waits until the coldest of days. I sure hope you will have enough heaters to keep warm. I'll be worried about both of you. I'm glad you were able to get on the list for the vaccine, that's some good news at least!

What a day for the furnace to give out! At least you are looked after and I hope the new one gets installed quickly. Meanwhile, we have a nice guest room down here in rain South Carolina ....

It is so nice you have so many folks to help out with just a call!
Family whether related or not.

All I can give you is warm thoughts and empathy. That also happened to us on a very cold January day. Monday can't come soon enough!

Yikes, that furnace didn't last very long. I had mine put in, in 2011 so hopefully I have better luck with it. Hopefully your new guy will have the furnace installed in short order.

The furnace crapping out is one of the worst things that can happen during a could spell. Watch out for the heaters. It's a good thing you have people who care about you and will help. Just for your information it's minus 41 F here this morning.

A new furnace is the right way to go. I hope it gets here quickly and installed fast!

Yikes that is definitely cold! I'm glad you are getting a new furnace and will then have no problems staying warm in that awful cold.

Oh no! Doesn't it always happen like that. You have such extreme cold weather there that it must really push the furnace. Please be safe and stay warm! I hope you'll get a new one very soon.

Isn't that just the way of it? On the coldest day of the year probably. So glad you have the gas fireplace. I may switch mine to gas as I can't get a chimney sweep. I'm so glad you have a local man that will take care of you! My heater people are great here and very professional but some aren't and you have to be careful. It's wonderful that your family and friends take such good care of you! You can't have too many friends when you get older! LOL! I hope Gene won't have to sell the old car to pay for the furnace! LOL! They're not cheap!

That is FAST for a furnace to quit working. I would think there would be some kind of warranty or refund involved. I'm so sorry and as usual Murphy's Law was in effect. The coldest part of the year!
You will both be in my prayers for a quick install of a new furnace.
Blessings,
Betsy

7 years and your furnace is bust? That sounds shady. I figured Northern Minn would get cold eventually. You definitely beat us! ( We are in the -6 f.) Still, it certainly is cold enough for us here in Iowa. Our windows are not very protective either. At least we don't have to pay for the heat here.... I keep telling the Landlords that the windows would lower their bills. But... What are you supposed to do?

I live in a place where a furnace isn't needed, what I call cold you would call chilly

Stay warm! We aren't quite as cold as you, we're hovering around -10 C. But that's cold enough for me!

I'm so glad you were able to arrange for a new furnace quickly. And that you have a gas fireplace plus heaters.

Man, I feel for you. Those minus numbers give me the shivers. Take good care. Thankfully, tomorrow is Monday.❤️

Oh dear, what a time for such a disaster to happen. I'm glad you have alternative heating to keep you warm - those temperatures sound horrendous, much colder than anything I have ever experienced.
Take care of yourselves, Mxx

So cold, and so not a good time to have your furnace fail. That seemed like a very short life span for that old furnace. though. I hope you have better luck with the next one. I'm thankful that you have means to stay warm enough while you wait on the new installation.

I hate being cold. Hope you’ll have a new furnace soon. Go with the good guy. You won’t regret that.

About 2 years ago we replaced our 40 year old furnace, bought new the month we moved in (the month it went bust). We went with the most recommended and the best warranty. We wanted something we could depend on. We had the repair guys here twice last week. I got the first bill - $25 service call because they couldn't find anything wrong. Day two I video taped the problem so they could see it when they came. Waiting on that bill.

I remember the days of ice on the wall! The first few years after we moved into our uninsulated house we actually stapled blankets to the inside kitchen walls.

So a furnace only lasts 8 years??? That's so wrong. I'm glad you have friends and family to help you get heaters!

I am so sorry about the furnace breaking down. I brings back bad memories when our fan went bad during our last year in our old house. I had to make shift a blower just to move a small amount of heat through the house. I hope the new one can go in quickly.

Praying you guys stay warm until your new furnace is installed! So sorry to hear that this happened to you. Glad you're giving the "nice" guy the business!

Good to hear you are finally on a waiting list for that vaccine! Hope you don't have to wait too many days to get a new furnace. Ours died in the winter too several years ago.

Sorry about the furnace issues, but glad you have other options to help you from being extremely cold. Like you say, it could be worse.

Fat chance your heater would have waited until the lovely weather made its appearance! Hoping those heaters keep you warm enough. I can't even imagine what those types of temps feel like...