We had a fine day yesterday.  We recycled and made a drop off at the Local Food Bank where there was a line outside but also a grocery cart outside for donations.  I had a few things that we were never going to use...so maybe someone else can benefit.

My other baby brother stopped by...she who sees robins first sent over blueberry muffin mix, disinfecting wipes and several jars of canned venison.  (She reads the blog.)    He wore a mask and we talked at a good distance outside...one of his daughters and several of his grands tested positive for Covid....they are all doing okay...their symptoms were like a bad cold.

We had the venison for lunch and it was fantastic.

Our snow melted...cause it warmed up a bit.

Far Guy has been watching a series on his computer in the evenings...every once in awhile he would laugh out loud...sometimes he would say "you have got to watch this!"   I decided to watch for myself yesterday afternoon...funny stuff...just the break we need in our ever so serious lives.  The series is on Netflix and is called Norseman.  I give it a 10 out of 10.  Not everyone may appreciate the humor...but we sure do. 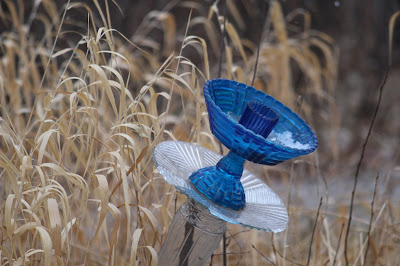 Labels: Isolation 2020, other baby brother, She was first again