We drove on over to see what was happening with the road construction.  We are thankful that we are not included in that mess this year. 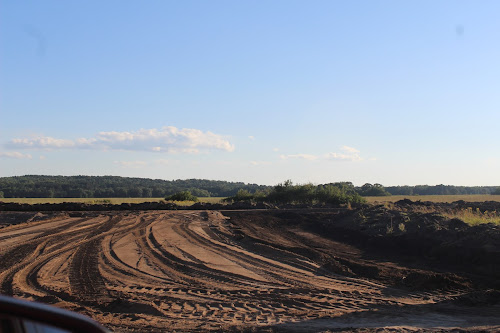 We are at the old corner and ahead is the new corner.  This is the old Linnell School corner. 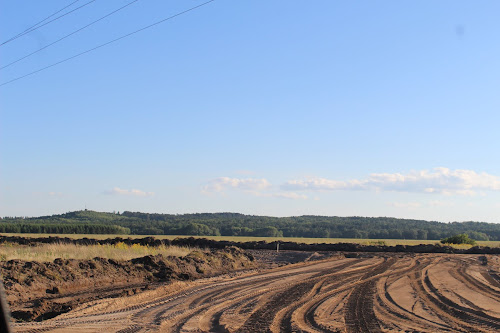 There you can see the Smoky Hills in the background. 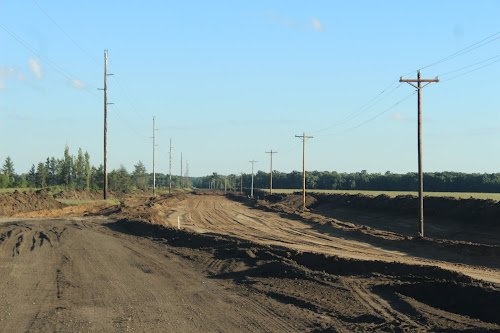 The driveway where I used to wait for the School Bus is on the left...where the tall trees are.
I rode two different School Busses over the years...Ivan Siegford's bus that started at Shell Lake (picked up Susan, Carolyn and Mary) and then Jim Hind's bus that came from the prairie.  I think the bus switch happened about Grade Five as that is when the country schools up on the prairie were closed and all the kids either went to the Osage Schools for K-6 or Park Rapids 7-12...that would have been about 1961.  The old Linnell School that was on this corner was closed in the summer of 1957 when the new Osage School was built.   I was suppose to go to First Grade at the Linnell School since we lived so close I could walk to school...instead I was a bus student!  After the school was torn down it became a baseball field.
I most often read books or studied on the bus...sometimes in the winter I would draw on the frosty window if I was lucky enough to sit by the window....in later years I would play cards...four of us would sit on the aisle seats holding a book on our lap and play Whist on the way to school.
Far Side
Posted by Far Side of Fifty at 3:00 AM

That is quite a project! Fun to read your memories of riding the bus.

How interesting about your experiences riding the bus. I know I did ride a bus but I have no memories of it. That road construction looks like a big mess. I hope they get it constructed soon!

I loved reading about your memories about riding on the school bus. I also rode a school bus all thru gramme school and then rode in a car pool for high school. That is quite the project for the new highway. Hope they finish it faster than some of the rode projects around here that seem to take yearsto finish.

My first bus driver was Mr. Silke. Not sure how it was spelled. Thanks for the memory prompt :-).

Both my father and my husband drove school bus at various times of their lives. But I lived 4 blocks from the school I attended K-12, so I walked. But I do remember playing cards on the bus on the way to ball games.

I was always a bus kid. So jealous of the kid who could walk to school. The only year I was happy about it was sixth grade. The classroom where the bus kids waited had the only tv in the school and we had talked the monitor into letting us watch Dark Shadows while we waited. I was on the last bus, but still missed the last minutes of the episode every day. The walkers would fill us in on the playground the next day.

Interesting info on the Linnell School - these two corners will be interesting projects! I don't recall any building ever being on the corner but did play softball there :)

My brother drove bus a few years, and I was thrilled to sweep the bus every week. I remember two other drivers who took me to school - Elmer Portlock and Charlie Miranda.

Great memories and so cool that you still live where you grew up. Hope you and far guy have a nice day :)

How neat that you're still whre you lived as a child! It's so interesting to see all the changes made in the same areas over the years. I was never on a school bus since it was 1 block to elementary school, 4 to junior high, and 4 to high school lol.

I grew up riding the school bus as well. My older brother (nine years older) road the bus to a school to the west of us, but my mom raised holy hell (her words) with the school board when I started because there was a school to the east that was closer. So we all ended up going to the bigger schools in the nearby town.

Lots of memories on the bus, some good, some not so good. But we had a good driver and he got us through some nasty storms and would drop us off at the curling rink in the old school yard every Tuesday and Thursday. The old school was moved several years ago to the town historic museum grounds.

Boy, this post sure brought back some memories! Take care and stay well!

How nice to have memories of your entire life in one area where you know everyone and they know you. There is a comfort in that, especially in these strange days.
I rode the school bus for junior and senior high. The grade school was just 8 blocks away and since my Mom never knew how to drive, we walked to school. I really didn't like riding the bus as there were bullies that picked on other kids. They didn't bother me at all, but I never have liked seeing people being picked on.
Blessings,
Betsy

It would be tricky to play whist on a bus.

Ah, yes. Bus riding memories. As some of the last on in the morning, my sisters and I had to perch precariously on the edge of the seat and hold on the seven miles back to school. Coming home the ride was long, about an hour - last on, last off. I remember bus riding friends from way back then.

Never rode a bus school. Mom drove us in grade school and then we lived in the dormitory all through high school. ( Boarding school? Lutheran school.) The only time we rode a bus was to a football game as a member of the team.. On our class trip, they hired a "professional" buss for our class... and we played cards just like you guys did. What fun.

What wonderful memories! I have such mixed feelings when I see big construction like this. On one hand it is wonderful to see advancements and improvements but on the other it is a little sad to see the things we grew up with change. When this is completed I imagine it will be a big asset to those traveling these roads. You two take good care!

I rode the bus from 4th grade to until 7th grade. That year my mom was hired as the school librarian so I rode to school with her. The school was only about a mile or so from our house but it was on a main state road so we weren't allowed to walk.

I never rode a school bus but my first year of school my uncle drove me and my brothers as well as some neighbour children in a horse drawn 'caboose' in winter. That spring we moved and sadly I rarely saw my favourite uncle after that.

Old memories are great, aren't they? Looks like alot of work yet to be done on that road. Must be nice to spend most of your life in the same place. Maybe not though, if there are things that have happened that make you sad. Your bus rides sound fun and long enough for a good card game with friends. Thanks for sharing your memories!

I haven't been on a bus in years, Tim rides a bus every day sitting in the drivers seat

I road a bus all my school years. My senior year I got a run down car and I got to dive it. The bus ran up and down all these graveled hills all over Troy township.

I don't remember whether I ever rode a school bus much. My memory of those long ago days is gone, I guess. But I sure enjoyed hearing about yours! :-)