Robin not a joke!

Far Guy saw a Robin in the yard yesterday afternoon while I was taking a nap.  He took a photo and showed me at supper ever so proud!

I went outside after supper and got a photo of my own. 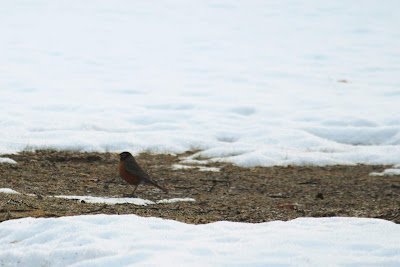 Not sure what happened in 2019...seems like I waited to see a Robin in our yard all spring.  Other birds were showing up but no Robins. 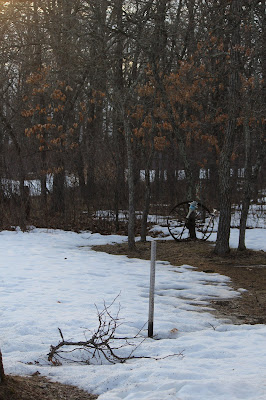 There is still plenty of snow and ice at the snowstick.

We had another quiet day, Far Guy woodcarved outside, we walked to the mailbox and wandered around in the woodshop/greenhouse.   I cleaned the bathroom and did some laundry and cleaned one more kitchen cupboard.

Life as we know it goes on.  Stay safe!
Far Side
Posted by Far Side of Fifty at 3:00 AM