Far Guy is On Hold for his Lung Transplant.  He has two types of fungus growing in his lungs.  He will be on medication for 8 weeks and then they may or may not take him off hold...it all depends how well the fungus responds to medication.  (The fungus revealed itself after 40 some days in culture from sputum samples taken on August 5 2019)

The Transplant Team discussed Far Guy again.   His Transplant Coordinator and his Pulmonary Transplant Dr thought he would be a good candidate for two lungs now...that would get rid of the fungus completely. Dr SH the Thoracic Surgeon said "No way that would make me too nervous." So they decided to put him on hold...which is better than being taken off the list.

More sputum tests were accomplished Thursday and Friday and blood tests are scheduled on Monday...and we get a new Doctor added to the mix...and Infectious Disease Specialist.

To say we are discouraged is an understatement.

It is our hope that once they get the fungus under control his breathing will improve.

One day at a time. 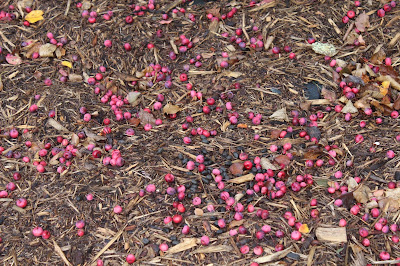 Deer poop amongst the small crabapples
Far Guy got his Shingrix shot last Wednesday....shots are in short supply...the VA Clinic happened to have one.

Previously we both had Zostavax shot...but now they say you need the new one because it is more effective.