This is a snapshot of my Mother in 1949.  There are very few photos of my grandparents barn, but there it is in the background. 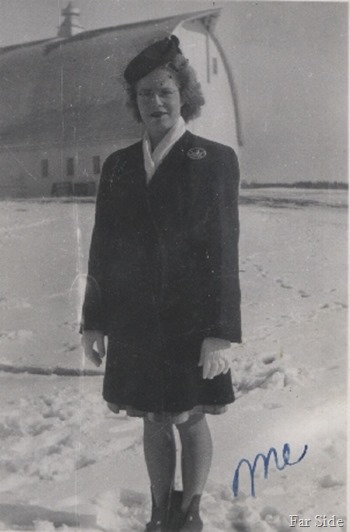 Not sure where she was going, but she was wearing a coat, scarf, gloves, fancy hat that would never keep you warm and a pair of rubber overshoes.  Mom was 20 years old in 1949.  She may or may not have met my Father by the time this photo was taken.
My Mom will be 90 years old later this year.
Far Side

Update:  The barn was built in 1943 or 1944 by Fred Schmaltz and my Grandfather Albert.  Before this barn there was another barn just east of this one that held 18 milk cows and 4 horses.
My Uncle Alfred was saving up to buy the cupola on top of the barn, he was killed in a car accident in 1947 and after that my Grandparents bought the cupola.

My Mom says, we always wore hats to church so that is probably where I was going.
Posted by Far Side of Fifty at 3:02 AM

I think you're very lucky to sill have that lovely woman in your life. Reaching ninety is a great milestone! :-)

What a wonderful keepsake! She is such a pretty woman and the photo is a treasure.

Your mother is beautiful. How wonderful that the barn is featured in the background. Praying for you and FG today. xo

That is an amazing barn!! Do you know when it was built?

Great photo, and I agree it is lovely you still have your mom. My mom was born in 1928 and passed away in 2003 just short of her 75th birthday. What I wouldn't do to have one more day with her.

Does you mom remember what the special occasion might have been?

No idea. I will ask my Mom

A pretty young lady. Maybe she was headed out on a date with your father. Lucky you to have your mother yet.

That's a huge barn! She was obviously dressed up for something because nothing she has on is practical winter clothing--LOL! My mom turns 90 end of this month. You are so blessed to have both your folks still with you. :) :)

Oh my! My mother grew up on a farm too, and would have been a similar age. Wonderful photo, bet she was going to church or a wedding.

I had completely forgotten about rubber overshoes. The buckles seemed to attract and capture snow, and they invariably froze. Sometimes they were nearly impossible to get off or even on.

Great photo! I too think you are very lucky to have both your parents with you. My mum would have been 90 this year also. Very impressive barn and I'm thinking it wasn't very cold out when that picture was taken. Your mom looks great, and I'm wondering if the skirt is daringly short? What do I know though, lol.

Your Mother is a beautiful lady. Ask her all the questions you may have about her and family now. I have such regrets for not asking my Mother more of my questions. She died when I was in my 30's and I just didn't think of that back then. This is a lovely picture and that is a big barn!

Yes, you are lucky to have both parents still with you! I have a lot of good memories of our childhood with you all! Tell your Mom hello for me! Sharon

Love it! My mom died when she was 80, she would be 98 if she was here. I love looking at their pictures from this era.

She looks so smart and lovely

Update: The barn was built in 1943 or 1944 by Fred Schmaltz and my Grandfather Albert. Before this barn there was another barn just east of this one that held 18 milk cows and 4 horses.

My Uncle Alfred was saving up to buy the cupola on top of the barn, he was killed in a car accident in 1947 and after that my Grandparents bought the cupola.

My Mom says, we always wore hats to church so that is probably where I was going.

She says most likely church.

Oh how blessed you are to still have your mother with you. I was only 29 when we lost my mother. You know, I don’t think I’ve ever gotten over it. That is a beautiful photo. Interesting history on the barn too.
Blessings, Betsy

Beautiful old barn with the cupola on top. Isn’t it fun to see the old fashions of the day? I just love old photos. Your mom looks very stylish in her hat, scarf, and pin.

I so love this post...love that photo of your mom. Love the look back. How wonderful that she is still with you. And that barn...I love barns. There is one over in Illinois that reminds me of this one. It is on highway and no room to pull off and take a photo...but I love it so. I would love to see inside. I always tell my husband if someone is outside, one of these days I will stop and ask for history.

Lovely picture of your Mom. I was interested to see where hemlines were in that era.
I liked the touching story behind that cupola.

That barn is HUGE! How did they build them so big with that curved roof? My cousin had one like that and it was 3 stories with cows on the bottom that actually went outside , tractors could drive up into the 2nd or really ground floor and then the hayloft on the 3rd.
Your Mom looks so cute! That was the year I was born...yep, 49' was a good year! LOL!

Your mom looks so pretty in this picture! When I first saw her, I thought she must be a flight attendant!!! Fun to look back at old pics and see old familiar things in the background like the barn with the cupola. Thank you for sharing such a lovely picture. More big snow coming tonight!

What a great photo, somewhere in the archives I may have some candid shots of my mom on the farm with her calf, she was not dressed up but the photo reflects some impish glee!

It is fun to find photos like this that has barns or houses in the background that can increase the stories of the photo.

I like old barns. That one is about 15 years older than mine. People really dressed up back then, not so much anymore, unfortunately.