Stevie was 70 years old earlier this month.  Stevie was a bit of a loner and lived in Missouri. He stayed in contact with his sister and occasionally his father.  He was a USAF Veteran.  He is survived by his daughter, his father, his sister, one half sister and four half brothers.  He was preceeded in death by his mother and a sister.

Every 5 or 10 years Stevie would come to Minnesota.  I did not see him the last time he visited but in 2008 I took a photo of him and Far Guy. 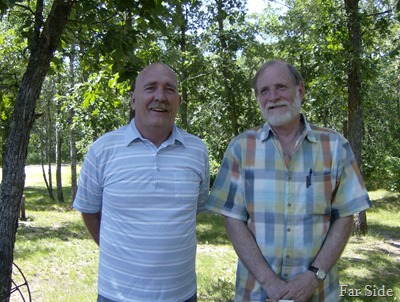 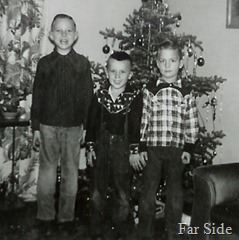 I am so sorry for your loss.

My condolences to Far Guy on the loss of his cousin.

My condolences. It is comforting to be remembered.
(ツ) from Cottage Country Ontario , ON, Canada!

My sympathy in the loss of your love one. The Lord bless you at this time of sorrow.

My condolences to your family. Another family member with lung problems?

So sorry for your loss. What a lovely memory from the 1957 photo!

I am so sorry for your loss. It sounds like Stevie lived as he wished.... which is all any of us can hope for. Sincerely sympathy, Andrea xoxo

Sorry about FarGuy's cousin, Stevie. Looks like they were closer when they were kids.

My condolences on the passing of Far Guy's cousin Stevie. I agree it appears they were close and I'm certain his loss will be felt deeply.

I'm sorry for your loss.

I'm sorry. 70 isn't very old. Stevie and Far Guy look like brothers in the 2008 photo. Would the lung problems being anything like what Far Guy deals with?

My thoughts and prayers are with you and your family with the passing of Stevie. 70 isn’t very old.
Many blessings, Betsy

I'm so sorry for you loss. I lost my uncle a couple of weeks ago, it's so hard to lose family members. ((hugs))

My deepest sympathy in your loss. Those photos are real treasures.

Yes most likely the same thing.

Sorry for your loss. Prayers for your family.

I'm sorry for your loss. May Stevie rest in peace.

It was nice that he came to visit from time to time. RIP yo your cousin, and I thank him for his service.

I am so sorry for your loss...but it is good that he came to visit from time to time.

You have written a thoughtful tribute to Stevie. I love both pictures. You and Far Guy have my sympathies. I pray for a cure to those lung disorders.

So sorry about Stevie.It sure is difficult losing family and friends! I have take the lung test but have not heard back yet from the doctor! I'm kinda scared to find out.Will let you know when I do, ok? Sharon

Thanks for introducing me to FG's cousin. I am so sorry to hear of his early demise. :-(

So sad and sorry for your loss. Now that I'm 70....it doesn't seem that old. I guess as long as you feel good it doesn't. I have cousins that I was close to growing up but I've reached out and they don't seem very interested. I think cousins are great especially when several of us were only children. that is a darn cute picture of the cousins together....everyone wore those cowboy shirts and Davy Crockett was really big! Coonskin hats and the rifle and everything!

So very sorry for you loss. Prayers for you all.