I found an old Polaroid in one of the photo albums.  It is dated January 1988. 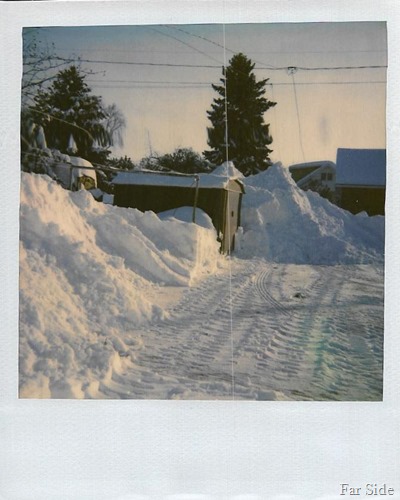 This was taken in Far Guy’s parents back yard.  The snow banks are as high as the clothesline.  Our daughters when they were little loved to play on the huge snow banks. They would run outside as we were getting ready to leave to play in the snow. They would get snow in their boots and then complain they were freezing cold.

Far Guy’s Dad took this photo because it is a Polaroid and his Mom labeled it with the month and the year.  They used to hire a local fellow to come in and push the snow around in their yard.

That clothesline was a hub of activity…it was there that Far Guy’s Mom put the harness on him and let him play outside when he was little…until he learned to unhook himself and go play at the neighbors… it was also where Muggy (a Chihuahua) got chained out, if you chain a dog to the clothes line they can run the length of it and bark!

I remember some winters like that growing up in WI

The main reason I love photos is that they bring us right back to the memories made there. Now that's a lot of snow! have a blessed day.
Sue

I guess it's always snowed a lot in your neck of the woods. That's a huge snowbank and would certainly be a lot of fun to play on if you were a kid. :-)

Larry always used to have hunting dogs. He still has two. He always felt that line was more human than a pen. The dog can see around them and actually can run farther. His lines were always pretty long. He calls them zip lines.

That’s a LOT of snow and would have been perfect for kids playing. My clothesline memories are of mom hanging dad’s work pants on wire pant stretchers. And of sheets snapping in a breeze.

Crazy amount of snow, but I guess I remember times like that when I was a child. My mom used to put the clothes out to dry on sunny (but cold) winter days. They would come in stiff as a board! I remember too, that using the clothesline meant a lot of ironing. It became one of my chores when I was 12 or 13. Now I rarely iron anything.

I got a chuckle that FG figured out how to unhook himself. Hanging clothes on the line in the winter was not pleasant - frozen fingers fumbling with frozen clothes.

Far Guy was enterprising even as a small child. I bet his parents could tell lots of stories.

We used our clothesline in much the same way when I was young. Our snow is getting pretty deep here this year, but not quite as deep as syour photo.
Blessings,
Betsy

snow blew around a lot at that time. I remember the huge snow banks in our yard and at school.

I've been thinking of snows like this lately when I look out the window and remember being a kid and LOVING the high snow piles! :)

My neighbor sent a video today from Minnesota that includes the house i lived in for 25 years and it looks just like this, with more snow coming down today! I remember shoveling snow onto the kids’ sleds and pulling it away to dump because the sides of the driveway were piled so high i couldn’t throw it up there anymore. I’m pretty glad i missed winter in MN this year!

Such a cool old photo

I've never seen such piles of snow! You don't see kids wearing a harness much any more. I think Lynn had one for Joseph when he was little. I'll have to ask if she ever hooked him to the clothesline. :) He would probably have torn down the clothesline.

That's a great picture. Such a lot of snow! My GS has been piling up snow but it hasn't amounted to enough for sliding down which I think he was hoping to do.

That is some snowbanks! Lovely memories.

That's a lot of snow. I chuckled about FG learning to un-hook from the clothesline. I know from our Theo, that chihuahua's can bark!!!

Those were the days...and polaroids! I also remember getting snow in my boots more than once. My Mother used to save bread wrappers to put over my shoes so the boots would go on easier.
What a little smarty that Far Guy was even back then!

Oh the good old days. When they get to be old enough to unleash themselves then it is time to quit hooking them up. Our snow is piled up in so many place by business and road crew. We are sort of being melting on certain sunny areas.