The wind blew.  It blew so hard an inch of snow was moved from the snowstick. It was a blizzard. 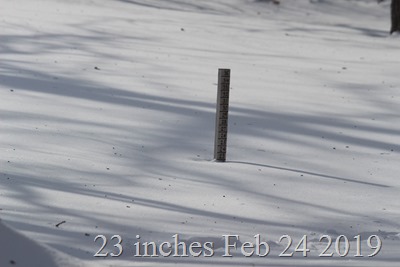 We heard the driveways were all blocked by drifts and local roads were one lane covered by drifts…big ole 4 wheel drive trucks like my other baby brother has made it through…but when he got to the highway visibility was zero…so he came back home and stopped to tell us about it.

Back here in the woods the snow moved around and the tree tops were in motion all day long. 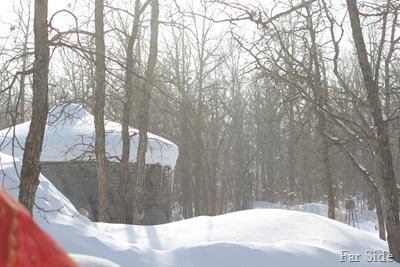 This is a view of little June behind big June.  The old grain bin looks like it is wearing a cap.

I used the power shovel once during the day to clear off the walk in front of the house.

I knitted and did some indexing at Family Search.  Far Guy worked on a woodcarving.

We cooked supper for my other baby brother and his bride…BBQ ribs, cooked carrots and french fries in the air fryer.  Since they live next door they didn’t have to venture out too far.  We really like our air fryer…makes great homemade french fries!  My other baby brother thought so too.  We have a french fry cutter that makes short work of a potato with the skin on…then they are air dried a bit and put in a bowl with about a half of a teaspoon of olive oil before going into the air fryer for about 20 minutes.