We have different gustatory cells Far Guy and I.  They are the receptor cells found in the papillia on your tongue and all around in your mouth….better known as taste buds.

Mushy is not a taste…yet that is how he described the culinary delight I prepared for supper.  He skipped lunch and might have been just to hangry to savor the flavors.

Chance thought it was a wonderful meal and he begged for more and more.

The recipe is from Farmgirl Sam.  I am not certain what she called it but I will call it…

Take one acorn squash and cut it in half from top to bottom, remove the seeds, cut a flat spot on the uncut side of the squash so it rests in the bottom of a roasting pan. ( I only got the knife stuck once in the squash before Far Guy took over the cutting.)

Put about an inch or two of water in the roasting pan…mine is the navy blue speckled kind.

Fill the cavities of the squash with pork sausage adding whatever seasonings you like to the pork sausage. ( I think my mix has some sage, cayanne pepper and a few other misc spices in it.. who really remembers when they are making a mixture.)

Bake covered at 350 degrees for about 90 minutes until the sausage is completely cooked and the squash is soft.

The pork sausage melds with the squash with a hint of the maple syrup..perfect meal as far as I am concerned.

Yummy not mushy.  I served it with baked carrots on the side…Chance likes them too, Far Guy not so much. (perhaps it was veggie overload for him)

I think I may have more sophisticated gustatory cells. I can tell when someone attempts to pass off potatoes from a box as real mashed potatoes…and Far Guy will just enjoy them.

He shared that eating baked squash was about as pleasant for him as eating cottage cheese would be for me. So I won’t prepare my Squash Delight for him anymore.  This will be a new go to meal for me when Far Guy has his gumbo.

Nope no photos of the food. 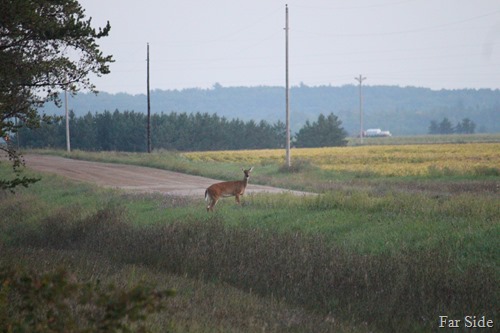 Just a deer coming out of the woods.  This one had one fawn that still had its spots. The bean field is turning yellow…the deer like beans…and yes that is smoke in the air most likely from the fires out West.

Labels: cooking, cooking with Far Side always an adventure, Deer