It was a long day yesterday.  Chance had his bloodwork, everything is fine except he has some inflamation that shows up. (probably from arthritis…go figure.)  His Tick Panel was negative.  They changed his medication.  He got me up at 5:30 AM because he had to poop….not quite the squirts but almost….thank goodness he was vocal enough to awaken me.  He was under the weather most of the morning but perked up in the late afternoon and even wanted to play ball.

Far Guy had a Eye Doctor appointment he needs new glasses for reading and night driving.  His eyes are pretty good for an old guy.  What cataracts he has are small and the cute little teenage Doctor said he will probably never have to have cataract surgery. He has been struggling with a stye…well it is not a stye it is a chalazion…and now he must clean his eyelashes twice a day with special “stuff.”   The VA is supposed to take care of his glasses but since the VA Doctor wrote the order incorrectly he gets no benefit…which really pissed him off.

I am waiting for a referal for my hand/arm.  I even wore the brace when I had a nap.  If I take enough Aleve I can survive.

It was my turn to cook supper, so we had Naan Bread Pizza.  Far Guy likes lots of mushrooms and peppers on his, I like mine plain with just meat and cheese.

After supper we went for a drive.  We saw nine deer. 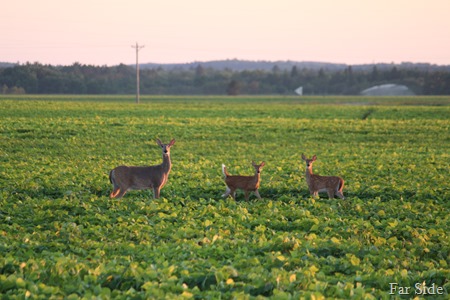 Twins with their mama vegging out in the bean field

Sounds like the day started early and rambled on as most days do, my friend. Glad for the good news, frowning with you about the not-so-good happenings, and enjoyed seeing what you saw on your drive. What a treat for the eyes! xoxo

I know they are just on the alert and ready to bolt but doesn't t look like Mama is saying, "Look at the camera and smile, kids!" Those deer sure have plenty to eat.

Hope your carpel tunnel problems get better! My sister had the surgery and is pleased with her results. Glad Chance is OK!

Poor Chance, with diarrhea. I do hope your arm gets better enough so you don't have to live with Aleve forever. This getting old business is not for scaredy cats! :-)

I'm glad Chance is doing as well as he is. He's a very special dog--in my heart, too. I sure hope they can do something about you arm soon. I would be mad, too, if the doctor's mess up meant I couldn't get something covered! Bummer. I hope you all have a really good weekend. :)

Why is it that when we're retired we keep busy all day?

Do they eat the beans or the leaves. I see deer in our bean fields up here too. We are dealing with a less than walking dog right now. I think we will make it through this spell but he gets to be difficult when he won't even try to walk. I had him out at midnight last night and he did walk and he did go.

Thankful that Chance got a pretty good report. I know it warms your heart when he wants to play ball. Blessings to you all this weekend.

Thank heavens Chance woke you up...in the house is not good for anyone.
Terry got his new lense yesterday and he says they make him feel 10' tall...I was worried about him on the ditch bank...he slipped a couple of times.
I sure hope your arm gets something for relief...the brace, but something more...that actually heals it. :(

Your day had an early start!! Good thing you woke up in time to let Chance out though.
Great picture of the deer and her fawns.

It's always something, isn't it. Hope your arm gets better soon. Unless you've been through that kind of pain you just don't realize how bad it hurts. Glad Chance got a good report from the doctor.

Do you make your own Naan or do you buy it? Great idea to use it for pizza. I've had it and like it especially since I like a crispy crust. The arm thing is awful....I hope it heals on it's own and fast. Too painful to imagine...I did have a hurt shoulder once and that was bad. Glad Chance is holding his own but old age catches up with all of us eventually....best keep moving!