My husband has an interest in his graduating class. I call him the “class babysitter.” In one year they will get together for their 50th Reunion.  That is a whole other can o’ worms that involves meetings and knashing of teeth.

What can I say it keeps him occupied.  He and Jackie have weekly meetings at her place of business… it gives me time to wander through the entire grocery store up one aisle and down the next and when I am done I pick him up at the Pharmacy.  Jackie missed the last monthly meeting  so he had to tell her of the goings on.  ( She was freezing up sweet corn and could not attend.)  Now several of the replanners ( different from the original planners) are having their own meetings at a local resturaunt.  Uffda…

One day Tommy( Bi polar living far away in Mississippi) called and was worried about Rick.  Far Guy was going to town so he stopped by to visit Rick.   Rick is just fine and wasn’t answering Tommy’s text messages because there are so many of them…as some days Tommy does not take his meds.

Rick had a bunch of old photos that we scanned for posterity.

Far Guy has been collecting photos for a number of years, borrowing them and scanning them, keeping track of obituaries etc… He made a three ring binder with many old photos and they make real good Wistful Wednesday blog fodder! 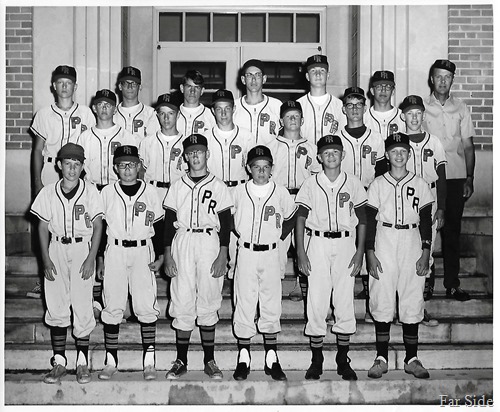 I think this is most likely from 1964 or 1965. Good old Mr Toops was the coach.  There are at least three different age groups in the photo, kids from Far Guy’s class, some from mine and some from the class after mine.

The center steps of the old high school was a great spot to take group photos.

Far Guy was never home during the summer so he was never in baseball.  In fact I could always throw more accurately than he could until we got Chance and then that ball obsessed dog taught him to throw!  Practice makes perfect!

I love the stories about Far Guy's classmates. He must be quite a diplomat to keep the reunion plans moving forward. Those uniforms are gems compared to the spandex stuff even the littlest baseball players wear now.

Fun to think of Chance teaching Far Guy how to throw a ball! :-)

Great picture - I remember those steps also. I smiled looking at the guys in the front row --- uniform pants and socks!

My 50th is in 2019, but I doubt it will be celebrated. No one is willing to take on the role of planning.

Tom help organize his class reunions, the 50ieth and also the 60ieth. His class was a small class, 22 students. Since I went to a vocational high school and the students came from all areas of the city, we never were close enough to have a reunion. There were six different areas of study, each almost entirely independent of the others. I sometimes wonder if any of these smaller groups have had reunions.

I'm sure it must take a lot of planning to arrange such an event. Sure wouldn't be my thing though.