Relatives on my side of the family have an autoimmune disorder called Celiac Disease or Celiac sprue.  When you have the disease you are very sensitive to gluten. When you eat gluten you may have a variety of symptoms; bloating, gas, diarrhea, constipation or vomiting.  There are about 200 different symptoms.

My Dad was diagnosed in about 1999.  In retrospect his brother Adolf most likely died from it in 1998.  My Aunt Anna was diagnosed a number of years ago about the same time as Cousin Geraldine.

My sister Julie has been diagnosed with it and her son Jacob who not only has the gluten intolerance but a dairy intolerance also.

Our youngest daughter Jennifer was diagnosed about two weeks ago.

Cross contamination in kitchens, the same spatula used to flip a pancake and then used to flip your egg can cause you to become ill.  Using the same toaster for regular bread and then gluten free bread.  If someone in your family has Celiac then you are better off having the whole household go gluten free.

From the Celiac Foundation:

When people with celiac disease eat gluten (a protein found in wheat, rye and barley), their body mounts an immune response that attacks the small intestine. These attacks lead to damage on the villi, small fingerlike projections that line the small intestine, that promote nutrient absorption. When the villi get damaged, nutrients cannot be absorbed properly into the body.

Celiac disease is hereditary, meaning that it runs in families. People with a first-degree relative with celiac disease (parent, child, sibling) have a 1 in 10 risk of developing celiac disease.

So far I have escaped this disease.  I do not eat certain foods…pancakes which I love but rarely eat.  There are also certain places I do not eat…some resturaunts are worse than others…some must not be as clean as my system likes.  Here at home I adhere to a clean side and dirty side of the kitchen and if they meet, then everything gets disinfected.  I also have a limited amount of fru fru on my kitchen counters. 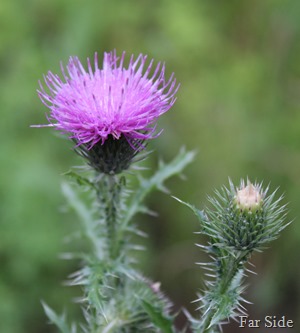 My goodness, what a cross it is having celiac disease. :-( I suppose the adjustments become second nature after awhile but sheesh, until they do! Genetics! Too bad we can't embrace the genes we like and leave the others go. Blessings~ Andrea

Ramblings of a Retired Lady said...

I do not know anyone affected by celiac disease, but it must be horrible to have to live with it, not knowing when and if it will raise its ugly head. God bless those that deal with it.

No one in my family has/had this disease. God was smiling on me and my family. As our scientists dig deeper into Genetics I am sure our future babies will be born not carrying this terrible disease. Sounds like you are adjusting to things quite well. God continue to bless you.

I'm glad to know you are only lightly sensitive to gluten. It's so hard to maintain a gluten free lifestyle, as you know, but I am sure you do it for your relatives and yourself. I'm glad Jennifer has been diagnosed and will be able to find a diet to allow her to become completely healthy. I cut way back on wheat years ago and it's been good for me, but I'm not sensitive to gluten.

Life is difficult when we have food sensitivities. Growing up I refused to drink milk, told my Mom it made me sick. Turns out I'm lactose intolerant, can't even eat ice cream.

We have a friend with this. Eating out can be a dangerous adventure for her...:(

It's good you have the knowledge that it is present in your family and can do what you can to avoid getting sick. Also good that there are so many glutenfree options out there now. Sorry for your daughter. It sure makes eating difficult.

Terry, our youngest daughter, and our oldest granddaughter all have Celiac Disease. We are so thankful for the diagnosis...I went totally gluten free in the house...ever so much easier. We are pretty sure Terry's Dad had it---probably Terry's Dad's Mother and her mother. I'm glad we know so much more today than those poor folks did back then.

There is also gluten sensitivity. Actually not hard to be gluten free. Our house is grain free, not just gluten free, and not because we have celiac disease. From my research I feel we are better off without the grains. We do allow ourselves, if we want it, a grainy 'treat' when we are out, but certainly could live without it. We make pancakes with bananas and eggs, a bit of nut butter and baking soda. Also love sweet potato latkes, just grated potatoes and eggs, with some salt and pepper. We also make muffins with coconut and almond flour. Been doing it for 2 1/2 years now and it is second nature.

I know of a couple people who have this and it takes diligence and care to keep yourself healthy! Must be a lot easier if everyone in the household eats the same. Products have vastly improved from what I have heard, so that's a plus, too. :)

My Goodness! Making food is enough of a chore and having to be so careful of cross contamination must make it a lot more difficult.

Celiac is a very miserable condition.

This is not easy condition to manage being so many foods that you cannot eat are temping. I have not been diagnosed yet but cant tolerate gluten and have aver grown of the small intestine. So I'm coming to find that this may just be ehat I hace. Keep up the will power����