A long time ago back in 1998 on an incredible hot summer day in August Far Guy dismantled an old Windmill near Buxton North Dakota.  It was scheduled to be toppled over and demolished. We knew the little old lady that owned the property and she asked us if we knew anyone who would like to take down a windmill.

Part of that windmill was assembled and is near the Wild Gardens. 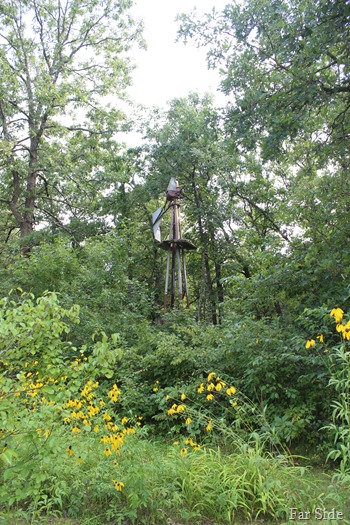 No it is not as tall as a windmill should be.  One sumer day back about the year 1999 Andy helped assemble it and get the legs set in concrete. I declared it tall enough. Years ago wild flowers called Rockets were planted underneath…you could see them for a few years and then the woods took over.

The vanes lanquished in the grain bin until this week. 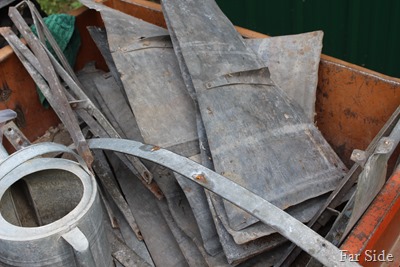 Far Guy collected them. My other baby brother was by and said “You can get rid of that scrap metal if you want, just put it in my pile.” 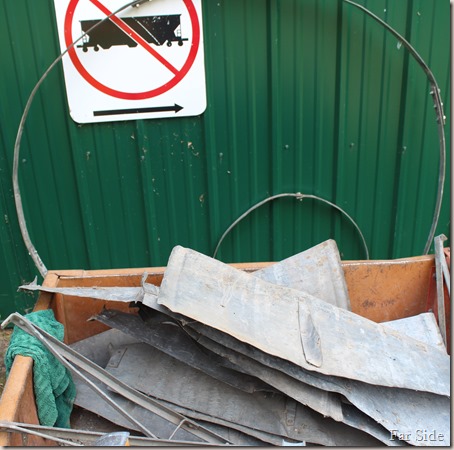 What?  It is not scrap…just a very old project. I helped to form the two hoops.

Far Guy has been working on it throughout the week.  It is not quite done…but it was far enough along to be placed in the yard. 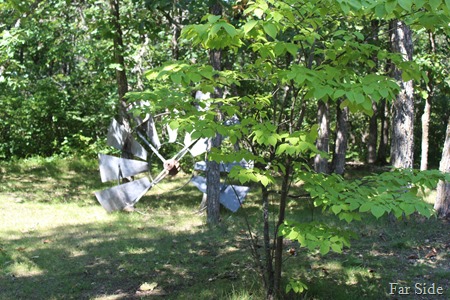 I wasn’t expecting that it would go in the air.  Leaning up against a tree is just fine with me.  Just beyond the Japanese Tree Lilac that never blooms are three oak trees that the riding mower cannot fit in between…it is a perfect spot for some yard art! 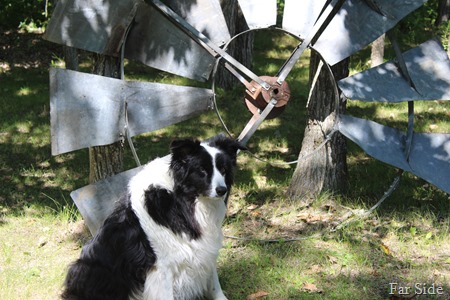 Chance posing for the photo. It is not quite done…it still needs another hub bracket…but it was far enough along to be placed in the yard. That old hub has been moved from here to there used most recently as a door stop. Far Guy reports that he has one half of a vane left over.

That makes a very unique piece of yard art. I love it. Could use it in a bare spot in my front yard planter where an old wagon wheel used to be.

Oops, going to try again.
Definitely not scrap! I love that you and Far Guy saved it. When I was growing up my cousins' farm, where I spent as much time as possible, had a working windmill that kept the stock tank full. I was never brave enough to "swim" in it or climb the tower but my boy cousins did both. Great memories!

Yep, it's some pretty unusual yard art now. Glad it found a way to be repurposed. :-)

That's an excellent project to finish.

Absolutely love it! I was going to say some family member should be calling dibs!

Looks just fine sitting on the ground, I like windmills

I think two or three young strong guys should come in and hoist it up like you hoist a flag to the top of the pole. I will not be one of those to help hoist. I have my miniature windmill that I am going to leave in the old yard. I like it as yard art too.

Wow - that is really cool!

You have the most interesting yard art! :)

You give me hope. Maybe some of the projects we have lying around will come to the top of the to-do list. Far Guy has made an interesting sculpture.

It's always that one extra part... So is it going up?

Nope it is staying by the tree :)

Nice yard art! We had a windmill like that once, on a place built by a retired farmer.

That is a great project!!

Well that would be great if you could get the big round of vanes up where it belongs. Oh I just saw above that it is staying by the tree, too bad! ;-) Gives me hope for the greenhouse that was offered for free in our neck of the woods. We went and took it all apart, one of those with loads of overlapping panes of glass. Then it got stored up high in the barn, and of course we wouldn't even remember what part went where, so much time has passed.

What an interesting save!

Better as yard art leaning against a tree than in a recycle bin!

What a fascinating project!