My Baby Brother and his wife hosted the first annual rendevous at their lake cabin.  Their cabin was supposed to be finished, but it is way behind schedule,  last week it got a roof and shingles.  We made good use of the kitchen that is not a kitchen yet and the porch and the garage. Everyone brought lawn chairs and we sat them up in the “kitchen”. 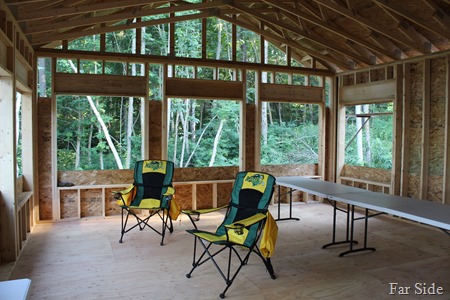 Many relatives showed up, it was about 72 F and partly sunny so it was a good day on the lake. 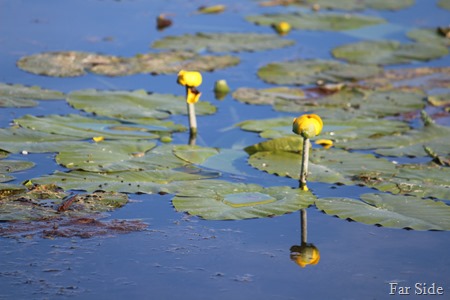 The food was fantastic, my brother did hamburgers, hot dogs and corn on the cob on his wood fired grill.  It was potluck so there was many salads and chips and special treats from Germany and Japan.  We were missing only a few people. (Trica, Katie and Ben).  My baby brother had five of his grands there and my other baby brother had ten of his there, only one of our grands showed up and that was Noah.. Lots of “little ones.”

No one went away hungry and if they did it was their own fault.  I took potato salad…my usual go to pot luck food when I have time to cook potatoes and eggs.

Ramblings of a Retired Lady said...

Sounds like a very good day to me! Food, family and fun....you cant beat that.

Ooh, I love those big window openings. This will be a welcoming space.

That is a wonderful soon to be kitchen. Sounds like it was a great day! :-)

Who needs a finished space when there is great food and people?

I love that they decided to start the annual event regardless of whether the house was done or not! And that looks like it will be a gorgeous, bright kitchen. :)

Looks like the perfect picnic set up. No worries about messing up a new place.

What a great family event! I wish more families could have these get togethers.

Such fun! Even though the cabin is not completed. I bet everyone will remember the time together at the unfinished cabin!

That would be fun as a family get together. I am so envious of the new cabin. My late wife and I did the cabin thing before we even owned a house. It was cheap and a family tradition. I would so like to do that again and could afford it now, but life doesn't seem to be leaning any way in that direction. I hope we can see some of his finished cabin sometime.

What fun and what a great group! I'm sorry their project is so far behind but it looks like they certainly made the best of it!

Family gatherings are the best. So many families only get together for funerals or weddings, so it's nice to see family getting together because they want to be together.