Some carnivals are different from others.  Some may have people who go by an alias/fake name and get by with it.

In my time with Merriam’s Midway Shows I only know of one. How much of an alias it was I am not certain….it was at best or worst a half truth.

One summer one of the Concessionaires had a new worker.  He was from England and had quite an accent.  Not sure what his real name was but everyone called him Limey.  Limey made extra cash by helping set up and tear down the Tilt.  He worked one of the joints for George Belben….a dart game with balloons maybe.

I talked with Limey, he was stocky, not too tall maybe 5 feet 7 inches, lots of freckles on his face and longish brown hair with a little red in it.  He wore sun glasses a lot, and mostly white shirts with rolled up sleeves with a pack of cigarettes tucked into the sleeve, the shirt was tucked into jeans.  The accent was fun to listen to.

In Seward Nebraska Limey, T J and Nick got into a bit of trouble in a Motel Room…they stole a bath rug.  The cops came and arrested them.  When they ran the checks…it turned out Limey was not a he but a she.

The word got out…and traveled like wildfire. “Limey is a Chick”  “What??” “You  know a chick with boobs.”  Some of them said “Oh good Lord I peed in front of her.” “No shit.”
She returned to the show wearing a wig and makeup and told me that she was going to write a book about her experiences during the summer.

The guys were all wondering how she/he pulled it off and pulled the wool over their eyes.  After it was all said and done she moved on…but the guys will never forget. 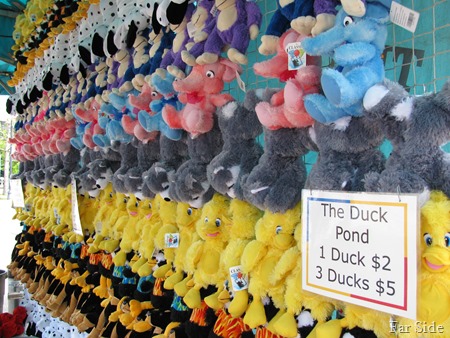 Wall of plush at a Duck Pond.