We lived at the lake in 1991. ( Just a half a mile from where we live now.)  I was running the resort and Far Guy was commuting 180 miles every day…90 miles in the morning and 90 miles at night.  He went through a couple of cars.

Jennifer was a Sophomore in High School and Trica was in her second year at Moorhead State University.   We had quite a menagerie of animals…a goat, horses, rabbits, cats and dogs. 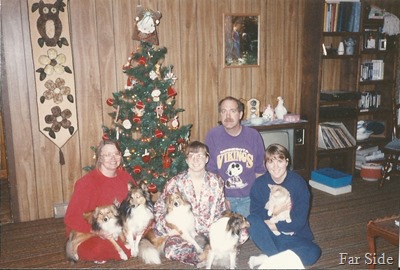 Me with Captain and Moses, Jennifer with Misty and G’Day Mate, Far Guy, Trica with Caramel.   We had at least one other cat named Shadow and possibly one called Snowballs Chance in Hell…Snowball or Snowy for short. (We were his hospice home for two years.)

The tree was a little short that year…I think it might have been a fake tree…as I was tired of pine pitch and needles and a fire hazard in the house.

Back then we were both on the Volunteer Fire and Rescue Department and on Boards at Church, we were so busy.   Sometimes I wonder how we did it all, but we were younger then!

I am not sure who took this photo, it was most likely taken the day after Christmas…the photographer might have been Richard ( to be son in law.)  I know he was around then because Caramel was a gift to Trica from him.  Edit: Some other boyfriend named Kelly gave her Caramel. She already had a cat named Shadow from a former boyfriend…good thing she didn’t have too many more boyfriends.